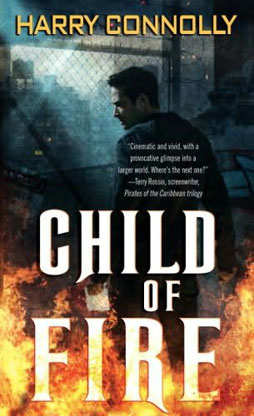 This essay first appeared as a part of Jim C. Hines’s First Book Friday series, in which authors describe their first sales. You can read the entire series on his blog or LiveJournal. This piece has been lightly edited for clarity.

The first thing to know about selling Child of Fire, my first novel, is that it happened after I’d already quit writing.

I’d spent years trying to sell longer works, but had no success; you might say I was a smidge discouraged. The book I’d written just before Child of Fire was very difficult and very personal; I’d literally wept while composing the first draft. What happened when I sent it out? Form rejection after form rejection.

I was angry (with myself, not with the people who’d rejected me; that’s one of my most important rules). I thought I’d been doing everything I needed to do, but apparently not.

For my next book, I used my anger as fuel. I started with a strange incident that needed to be investigated. I loaded the story with antagonists and conflicting goals. Then I ramped up the pace and kept it going, making even the slower parts, where the characters just talk with each other, quick and full of conflict.

But I was sure I was wasting my time. If my last book hadn’t gone anywhere, why should this one?

Now for some context: I was a stay-at-home parent while writing Child of Fire. I’d be at the local Starbucks when they opened at 5:30, write until 8:30, then go home and make breakfast for my family.

I cooked, cleaned, and spent a lot of time with my son. We lived cheaply and my wife’s job covered the bills. We didn’t have a much money, but we had a lot of time together. It was a good life.

Then it fell apart. My wife was injured and needed surgery. The only health insurance we had was a Mastercard[1] and she had to take leave from her commission-only job. Naturally, I went back to work, doing my best to cover the housework while working long hours. I couldn’t write. I couldn’t keep up with the medical bills. Bankruptcy was starting to look unavoidable.

And I was ashamed. 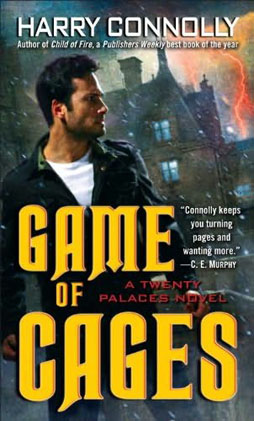 I’d sacrificed so much to pursue my writing, and what did I have to show for it? A series of joe-jobs, no money, no car, no rainy day fund, nothing. All I had was a box full of rejection letters.

After talking things over with my wife[2], I decided to go back to grad school and get a career. Be sensible. Maybe I’d come back to writing when things were more stable. Maybe.

Of course, I still had Child of Fire on my hard drive. It seemed disrespectful not to query it. I’m naturally a fatalist, but you don’t stop doing the kata just because you flubbed the middle. I mailed queries…

And I started getting requests for sample chapters, then whole manuscripts. Eventually, three agents offered to represent me, and I signed with the one who had the highest, most concrete expectations of me. Back went the GRE study guides to the library.

That was December of 2007. By February of 2008, it looked like Child of Fire was going to auction. Instead, Del Rey jumped in with a six-figure pre-empt bid, which we accepted. Since then, my debut novel has been placed on several best of the year lists, including Publishers Weekly’s Best 100 of 2009. [3]

And… you know how so many writers say they danced for joy at their first deal? Or when they signed with their agent? I didn’t. Both times I collapsed into a chair with a profound sense of relief that I hadn’t wasted my life after all.

[1] I know it wasn’t a great idea to go without health insurance. I know we gambled and lost. Please do not lecture me on the virtues of jobs with benefits; I already know because I lived it.

[3] Find out more about my books on my website: www.harryjconnolly.com. You can read sample chapters there, too.

[…] of him lately over at Black Gate, but he’s been very busy writing some best selling novels. You can find all about that over here, and a little bit more about Harry and his writing if you just keep […]

[…] evil and human motivations, among other things. They also posted a “reprint” of the First Sale essay I wrote for Jim Hines. If you didn’t read it then, you get another […]

[…] Happily, there have been a couple of other sales here, too. I also spoke about the details of my first novel sale last Saturday, and my interview with Howard Andrew Jones appeared […]