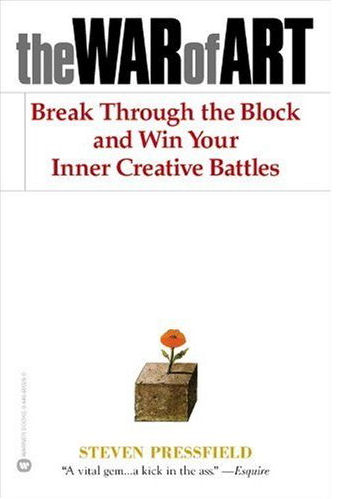 I think one of the reasons that there are so many books out there offering writing advice is that there are so many ways up the mountain. Different writers use different ways to battle their way up the height, sometimes changing their own approaches day to day or project to project. I wouldn’t be surprised if most serious writers have at least one or two of these books on their shelf, or in a box somewhere, its resting spot likely depending upon how useful the writer really found the information.

My current favorite is titled The War of Art, and it has held that position for almost two years, partly because I’ve been too busy to read many writing books, but mostly because it gave me everything I needed to fight my most recent battles. You may recognize its writer, Steven Pressfield, as the author of Gates of Fire, Tides of War, The Legend of Bagger Vance and sundry other works.

But it doesn’t matter if you’ve never heard of Pressfield or read a line of his work if you’ve ever had trouble procrastinating with your writing or any other creative pursuit. Pressfield names your opponent in the battle between creation and NOT-creation “Resistance,” with a capital R, and in this short, concise book, tells you how to recognize it and move forward up that mountain.

Strategists and tacticians tell you that to win the battle you must know your enemy, and Pressfield spends the first third of the book describing different ways that Resistance manifests itself in our lives. He writes: “Resistance will tell you anything to keep you from doing your work. It will perjure, fabricate, falsify; seduce, bully, cajole… It will pledge anything to get a deal, then double-cross you as soon as your back is turned. If you take Resistance at its word, you deserve everything you get.”

A few pages later he goes on to say: “Resistance’s goal is not to wound or disable. Resistance aims to kill. Its target is the epicenter of our being: our genius, our soul, the unique and priceless gift we were put on Earth to give and that no one else has but us. Resistance means business. When we fight it, we are in a war to the death.”

Many writers, myself included, find it all too simple to NOT-write. It’s a battle I have to wage every single day. So does Pressfield. And in the final two thirds of this short book he provides suggested work habits for winning the fight against Resistance.

He doesn’t really give formulas, though, which would have rung false to me — remember my analogy about how we all climb that same mountain in slightly different ways? Instead, Pressfield provides examples: how he budgets his day; how Somerset Maughan found inspiration. As I read these and other stories about professional ways to overcome Resistance I was inspired to devise my own habits that seem to be working fairly well for me, most of the time.

One of the few writers I know who never procrastinates is my friend Evon. She understands Resistance abstractly but never has to battle the monster. When she sits down to write, the words just flow. I’ve spoken with her to try and plumb her secrets (while striving to hide my envy) and now theorize her ability to make it happen stems from her encounter, not once, but multiple times, with life-threatening cancer.

She understands far better than I do the importance of making the moments count, but in a joyful, celebratory way rather than with frantic worry that time is running out, as I fear I would if I had experienced the same trials.

Now I do not think a productive writer must encounter debilitating or deadly illness in order to find his or her rhythm. But I do think writers can try to approach the creative process with the mindset that the minutes and hours and days add up, and are counting toward their inevitable conclusion. Some studies even suggest that if we “follow our bliss” (Joseph Campbell’s apt expression) that our mental and physical health improve; some studies even suggest that life-threatening illnesses go into remission for some lucky individuals when they pursue their dreams.

Whether or not that is true, I personally hold that we should make every day count for our families, friends, and fellow human beings. And as a writer, I think that if we are called to write, we should make our days count toward our writing as well.

I think Pressfield would agree:

“If you were meant to cure cancer or write a symphony or crack cold fusion and you don’t do it, you not only hurt yourself, even destroy yourself. You hurt your children. You hurt me. You hurt the planet… Creative work is not a selfish act or a bid for attention on the part of the actor. It’s a gift to the world and every being in it. Don’t cheat us of your contribution. Give us what you’ve got.”

Well, okay, creative work CAN be a selfish act and it CAN be a bid for attention, but it doesn’t have to be, and if that’s truly your primary motivation as a creator, then you’re setting yourself up for a fall, as Pressfield argues in earlier sections of the book.

If these quotes and my summary of the text speak to you, and if you’ve had to wage your own battles with procrastination and Resistance, The War of Art is worth your time. It’s certainly been worth mine.

Now get off the internet and go write something.

This all sounds horribly familiar. Day after day on the internet, I come across people who tell me how they feel like they are dying if they don’t get a chance to write that day. I am the very opposite.

Now get off the internet and go write something.

Good point! But before I do, I’ll waste more time ordering that book you’ve just been pimping. I like Pressfield’s work a lot.

[…] interjects: I am a big fan of The War of Art, and wrote a recent post about it here at Black Gate. You’re not the first author I’ve heard recommend King’s book so […]