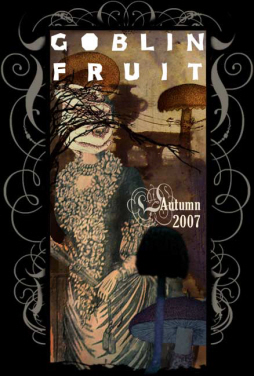 Okay, this is the Age of the Internet, so you’ve probably had this experience.

Say you’ve met a couple of like-minded ladies at a few writing conventions (as described in Part I). Say these conventions were World Fantasy 2007 and WisCon 2008 respectively. Say you’ve set about exchanging a million emails with these ladies, the occasional phone call, friending them on LiveJournal and Facebook, and rediscovering, happily, the merits of snail mail. These ladies just happen to be the two editors of Goblin Fruit Magazine.

Fantastic! You send them your really long rhyme-y poems nobody else wants, and sometimes they even take them, and even when they don’t, they seem to like you anyway. Life is totally Utopian.

You all read fantasy, right? What happens after Utopia?

Pretty soon these ladies (your ladies, as you’ve grown accustomed to labeling them) both start talking about another woman.

Oh, she’s this incredible writer they know, and oh, her poetry! Her poetry, my God! And, her novel! You have to read her novel, they tell me. Twisting the knife. So vigorously. So joyfully. 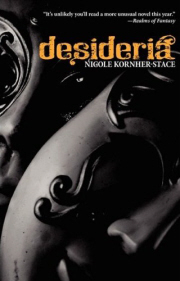 “You must read Desideria!” quothed Jessica P. Wick, Goblin Fruit editor and mermaid, to me, over the phone. “Claire, you must. Just – for the language!”

And then she probably said something really pretty about the language that I cannot possibly recreate here from the wreck of my memory, how it was like Valenciennes lace snagged with razor blades, or like blood-tinged sea spume on the banks of Normandy or like really expensive dark chocolate threaded in a web of gold.

Under the enormous pressure of this praise for a complete stranger, my sunny disposition straightaway gave in to my alter ego.

My inner Iago crept to the surface, green as an iguana, mean as a T-Rex, muttering, “I don’t wanna read her stinky ol’ novel. Or her fancy-pants poetry. Don’t like her. Don’t wanna like her.”

“Oh – no, no, no!” protested Jess, unaware of how she was murdering my soul. ‘You’ll love her. And then you and Amal and I will all write together in a Shared World, like the Borderland books. Or Thieves World! It’ll be great.”

This further weakened my defenses. Together, through a series of inexorably blithe emails, the Goblin Girls introduced me to Nicole Kornher-Stace. 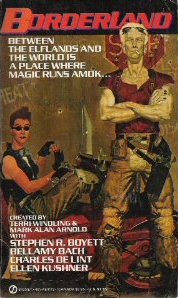 Surely this was the beginning of the end.

As is often the way of these tales, it took but a day or two to convince me to kick my inner Iago back to the bog he drowned in. Nicole Kornher-Stace rocked (and continues to rock) my world.

She makes jam from White Nectarines. She knits scarves from recycled sari silk. She sends me Rasputina and makes me watch all the Guillermo del Toro movies that aren’t Pan’s Labyrinth. She calls her two-year-old The Changeling!

Oh, and her writing?

The Goblin Girls were right about that too. Her poetry, her stories, her novels? Chocolate and blood, sea spume, lace, razor blades. And then there are the ghosts.

Nicole (or “Coal” as we call her, and sometimes “Young Queen Coal” if we’re in a Nursery Rhyme sort of mood) was Goblin Fruit’s Featured Poet in Summer 2009.

Right about then was when Goblin Fruit also put out its first printed matter, which just happened to be a collection of Nicole’s featured poems, entitled Demon Lovers and Other Difficulties.

The story of how it all happened is told best from the poet’s own mouth.

I can trace my relationship with Goblin Fruit, and with Amal and Jess individually, back to a poem.
Specifically my first published poem and the second poem I’d written since middle school (so if you read it, do be gentle), which appeared in 2008 in Lone Star Stories, may it rest in peace. When Amal read it, she immediately contacted me via Livejournal to request that I submit some further scribblings to Goblin Fruit.
So, in between other projects I started working on some poems. I wasn’t sure what I was trying to do — poetry was very new to me and still is — but I am nothing if not stubborn, and eventually wrung a couple of poems out. I think the original idea was to publish one in Spring ’09 and one in Summer ’09, but then the Goblin Queens got to conferring, which in my experience leads to nothing but trouble, and next thing I knew they wanted to run those two poems, plus two or three more, as a feature.
I was pretty well gobsmacked, let me tell you. I think their previous featured poets were JoSelle Vanderhooft, Jennifer Crow, and Cat Valente. I mean, I’ve got five bucks says you know who they are and you don’t know who I am, so the cause of my bewilderment might well be apparent. Not only that, but they wanted to turn these poems into a chapbook. Bound printed matter. Their first. Not only that, but they gave me the best set of interview questions I’ve gotten thus far. They were actually enjoyable to answer! 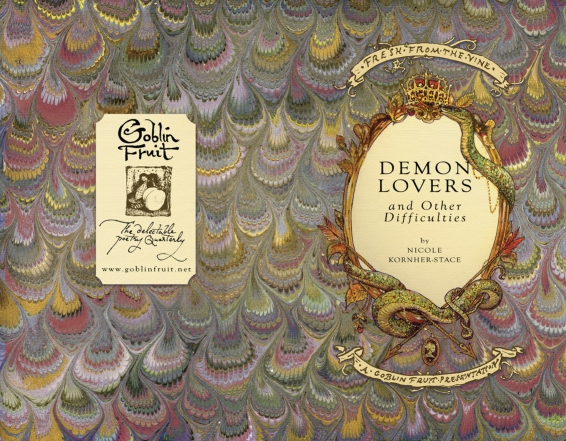 And if all this wasn’t surreal enough (reader, it was), they were going to give it a real true launch party at Readercon 2009, which was my first con ever.
All this occurred according to plan, and I stumbled through it all in my whelmed and ungainly way, and at current reckoning I believe they’ve sold out at least two printings. The chapbook’s called Demon Lovers and Other Difficulties and can be purchased directly from the Goblin Queens here.
It’s got gorgeous illustrations from Oliver Hunter, whose lush and numinous style you’ll recognize from any issue of Goblin Fruit, and whom I think really unleashed the full force of his awesomeness upon this book.
Also, credit where it’s due to Mike Allen, who did the interior layout, and Mike VanHelder did the proofreading. All in all, chapbook or no chapbook, Goblin Fruit‘s been an unholy heap of fun to work with, and I’m very much looking forward to seeing whatever mischief they get up to next!

To whip up public interest in Demon Lovers and Other Difficulties to a Dionysian frenzy, the Goblin Fruit team created a teaser for YouTube, which they plastered all over Facebook, LiveJournal and in the Mischief section of their website.

“And the song?” you ask. “That eerie echoing song with those weirdly Rossetti lyrics?”

Why, thanks for noticing! That song is by yours truly, with music composed and performed by my own brother Jeremy Cooney, who will answer a random phone call that starts with: “Dude, hey. Got goblins on the brain. Let’s write a song,” with a laid-back chuckle and a, “Cool. I was just noodling around on my guitar anyway.”

We even got our cool artist friend Rebecca Huston to draw us a pictorial companion to the song (as seen above).

The moral of this story?

All this skill and effort, passion and collaboration, combined with the use of multi-media platforms and social networking, have made Goblin Fruit’s first printed material, a small glowing piece of art called Demon Lovers and Other Difficulties a beautiful success. If you measure success by how quickly it sells out at conventions. Which we, being poets, do.

But then you guys became friends, and you wrote that AWESOME poem for her, that I love, that Mike published.

Also, you and your brother: what a great team.

Well. We’re fantasy writers. We do so like a happy ending. Except for Coal. She likes to kill everyone at the end of HER books.

All my brothers rock; Jeremy just does it literally!