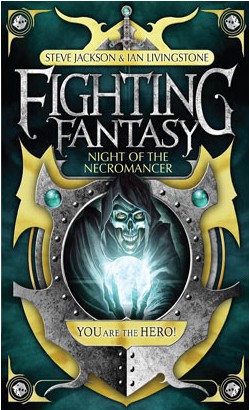 Throughout the book, you are instructed to jot down codewords in response to events or choices you’ve made. At later junctures, having these codewords — CRPG writers and developers will recognize them as “flags” — affects reactions or alters situations. Previous FF gamebooks like Bloodbones used codewords but never in such numbers; Necromancer has dozens and dozens. They inject a strong element of cause-and-effect into the static plotline typical of gamebooks.

For example, you may explore a stable, where you encounter a wild ghostly horse you can attempt to tame. Success results in gaining the word “Steed” to your character sheet. Later in the book, if you have the codeword “Steed,” you can ride the horse across a distance that is otherwise impassable to you. Codewords also allow you to revisit previously explored areas and access locales that were unavailable before. Not all codewords are beneficial; some signal awareness of you to malignant forces, preventing use of your spectral powers to sneak through areas or achieve objectives.

Though both Bloodbones and Necromancer were written by Jonathan Green, 15 years lie between their authorship. Necromancer is a quest narrative but not in the traditional sense: rather than seeking a Rod of Seven Parts or Hand of Vecna, you must discover codewords to solve the book. Yet since you neither know what codewords you need nor where to find them, you simply have to follow your nose to root out the mystery. Necromancer‘s decision tree isn’t based on whether you take the right-hand corridor or the left — it’s about what choices you made before you arrived at the intersection. Gothically fun, cogent, and fat (450 passages instead of the usual 400), Night of the Necromancer is one of the most interactive solo games I’ve experienced this side of a keyboard.