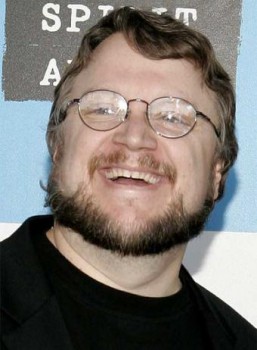 The following “news” is at least a week old, but readers rarely head straight to Black Gate to get breaking film news. But two recent announcements from writer-director Guillermo del Toro, one of the great genre artists in the film business right now, are so cosmos-shattering amazing, especially for the sort of person who seeks out Black Gate, that I finally have an excuse to click on that “news” button for the first time on one of my posts and feed you some “elder news.” It’s late, but if you haven’t heard it yet . . . it’s big. It’s cyclopean. It’s 999 pieces of killer.

The fast version: Guillermo del Toro, the genius behind Pan’s Labyrinth and Hellboy II: The Golden Army, will next be writing and producing a new movie about Disney’s “The Haunted Mansion” theme park attractions, and writing and directing an adaptation of H. P. Lovecraft’s short novel At the Mountains of Madness.

The first piece of news came as a complete surprise to me; the second I knew would happen “some day,” but I didn’t think that meant, well, now. Both announcements hit me where I live in hefty ways. I would move into the Haunted Mansion if I could, and H. P. Lovecraft volumes would line the shelves beneath Nicholas Roerich paintings that stretch to reveal that the Himalayas are built over an alligator-filled lagoon.

For the past two years, del Toro has been dwelling in “Hobbit limbo.” Originally attached to direct the Peter Jackson-produced adaptation of J. R. R. Tolkien’s The Hobbit, del Toro left recently when MGM legal troubles put the movie on indefinite hold. It was sad to see del Toro go, but it is probably for the best; every day he had to wait for the webby mess around The Hobbit to somehow untangle was another day he wasn’t working on another of the many great projects he had publicly talked about tackling.

(Honestly, even as a Tolkien fan, I’m not straining at the bridle for a Hobbit movie. I already got the Tolkien adaptation I wanted, ten hours worth of it, and The Hobbit is more like a sugary dessert or a glass of Brandy after The Lord of the Rings. The movie will get made eventually and I’ll go see it. That’s enough for now.)

Back into free-agency in May of this year, Guillermo del Toro didn’t waste time getting his new projects lined up. . . . 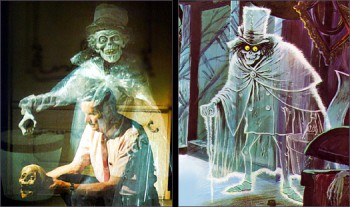 The Haunted Mansion announcement came at the 2010 San Diego Comic-Con. Disney had already done a film version of the Haunted Mansion in 2003, directed by Rob Minkoff and starring Eddie Murphy. If you missed it, your life is better than mine by eighty-nine minutes. It was a modest success and nobody called for a sequel. I don’t think anyone imagined that Disney would want to return to the concept so soon. But the moment del Toro announced he would craft a new version that would be “scary and fun” like the rides themselves, the gosh-wow factor immediately crystalized: “Now this is a great idea.”

It seems that Señor del Toro is an avid fan of the Haunted Mansion rides and their ghoulishly playful Marc Davis design, to the point that he has a room of his house dedicated to Mansion Memorabilia. I can’t blame him: I think that the Haunted Mansion is one of the pinnacles of gothic entertainment and dark ride design. I’ve written a bit more about my own Haunted Mansion obsession here, so suffice it to say I’m worked up to see what sort of movie del Toro’s wondrous imagination devises. The choice of director will be telling; I’m eager to see who lands the job. I suggest giving one of Pixar’s animation fellows a shot at live-action directing. With Brad Bird helming the next Mission: Impossible and everyone awaiting Andrew Stanton’s John Carter of Mars in 2012, Pixar is in the right position for more crossovers to flesh and blood filmmaking.

When del Toro’s Haunted Mansion announcement arrived, many people assumed that he would direct it as well, and some of the early articles mentioned him as taking on the role. Del Toro quickly corrected this, saying that he already had his next project as a director, and it would be a straight horror film. 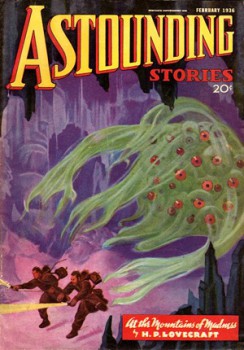 And it turned out to be At the Mountains of Madness. Del Toro had written a script to adapt Lovecraft’s short novel back in 2004 for DreamWorks, but it always seemed a far-off project for him and his producing partners, a dream movie that would have to wait while a slew of other directing jobs were finished. As a sell to a studio, the property presented enormous difficulties, as the director summed up: “[At the Mountains of Madness] is a delicate project to push through a studio: no love interest, no female characters, no happy ending. . . . But I believe it’s time to resurrect the big tentpole horror movie. The event horror movie. Like The Exorcist was or The Shining or Alien or Jaws in their time. . . .”

And despite such problems, on 28 July 2010, the director made it official: At the Mountains of Madness would be his next film, and James Cameron would serve as producer on the 3D movie for Universal.

There are few fantasy, SF, and horror fans who haven’t read At the Mountains of Madness at least once. It’s a cornerstone. Written in 1931 and first published in three installments in 1936 in Astounding Stories under editor F. Orlin Tremaine, it ranks as one of Lovecraft’s masterpieces, containing a unity of tone, effect, and language that creates an incredible alien horror experience in the final terrestrial frontier of Antarctica. It moves the author’s famous “mythos” from the realms of the supernatural and the demonic into science-fiction territory, and is one of the best example of SF horror ever written. It isn’t my favorite Lovecraft work (“The Colour Out of Space” gets that designation) but it’s close to the top.

However, there’s no way of getting around it: At the Mountains of Madness presents cosmic obstacles toward feature-length film adaptation. All Lovecraft presents the difficulty of the author’s use of the unseen and the hidden to evoke horror, de-emphasis on characterization and dialogue, an avoidance of female characters and romance, and lack of interest in standard thriller and adventure mechanics. At the Mountains of Madness does have some elements of an adventure story, since it depicts a team of explorers making bizarre and dangerous discoveries in Antarctica, but at the core the short novel is a lengthy walk-through as two s 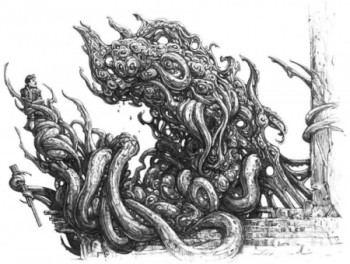 cientists wander the (apparently) deserted architectural monstrosity of the City of the Old Ones and delve into the true history of primordial earth. It’s an entrancing read in Lovecraft’s academic and dense prose—you can feel the world peel away layer by layer as the explorers look into the vastness of the cosmic tale of Earth, and shiver of Antarctic cold is palpable—but not much really, well, “happens” in it until the finale.

But I have enormous faith in Guillermo del Toro. He’s not only a fan of Lovecraft, but also of the many authors who influenced the Old Man of Providence. You only need to glance at the astonishing achievement of Pan’s Labyrinth to see the workings of Lord Dunsany on del Guillmero’s style, and Hellboy II cemented even further his adoration of the Weird Tales style. With the backing of Cameron (money! money!), I think that del Toro can deliver what he calls a “tentpole horror movie,” a phantasmagoric epic that might grasp and manage to seize some of Lovecraft’s cosmic vision. I’m even willing to go with the 3D on this, since Cameron is onboard to help with that, and Avatar is so far the peak of 3D as artistic tech. Yes, better than Cats and Dogs 2.

(A personal wish for the adaptation: liberal inspiration from the paintings of Nicholas Roerich, the Russian artist whom Lovecraft mentions a number of times within the story. Roerich’s work is “awesome” in the absolute sense of the word—any painting of his is fuel for a hundred novels and a free conversion to the mystical religion of your choice.)

The next big question is: Who will del Toro’s favorite performer, Doug Jones, play in the two movies? an Old One/Elder Thing? An albino penguin? The hatbox ghost? The tall skinny hitchhiker? (He actually would make a great H. P. Lovecraft if the author makes a “cameo” appearance in At the Mountains of Madness.)

Holy Moly. Why do people announce things when they aren’t DONE yet? Why do they make me WAIT??? Eeeek!

I just watched Devil’s Backbone for the first time this weekend (I’ve seen lots of the others, and loved Hellboy II), so I’m even MORE excited!

Has anyone else noticed that Del Toro has some weird fetish for “Destroyed Mouths”? Don’t get me wrong, I love his movies, but I’ve noticed that theme…

-The “Nanny” in “The Orphanage” when she gets hit by a car.
-The plant elemental in Hellboy when Red clobbers it.
-The Fascist in “Pan’s Labyrinth” when the hot rebel lady slashes him…

I’ve even imagined this might be behind his leaving “The Hobbit”. Really, like when Bilbo uses the magic dagger (to him a sword) on the goblins, the spiders or when Smaug gets killed and crashes. Wants a gory, destroyed mouth, but the producers who IMO only care about sucking money from us probably said “Uh, they almost hung us for the Dwarf Tossing joke in Fellowship, no creativity allowed!” and he stormed off.

I don’t hold any stock to care in Haunted Mansion, but it’s probably “Money is Money” and maybe Disney will let him do a “Skeletal Destroyed Mouth” is that ok?

And, of course for LoveCraft a shoggoth is PURE “Destroyed Mouth” as it flows/oozes all over with eyes, teeth, other appendages swirling all over, it’ll be “Destroyed mouth paradise”!!!

Wonder how he got that?

IMO, it’s cause he’s from some kind of “Nobility” and his parents even got kidnapped/held for ransom in Mexico. Probably some brutality by the “Banditios” or “Revolutionaries” or “Drug Gangster” depending on what side you are on…?

Will Hart Has Posted 1181 Lovecraft & Cthulhu Related Items on Flickr to Get the Pre-Film Excitement Going!

Check them out at: