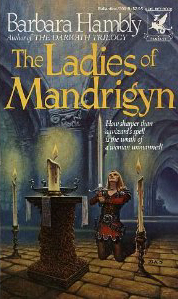 The first note I made on The Ladies of Mandrigyn was, “too many adjectives!” I also took an immediate dislike to the main character, a mercenary captain who routinely buys and keeps teenage concubines.

The second problem resolved itself nicely during the course of the story, but the adjectives never did let up. If you like spare prose, this is probably not a book for you.

Before I talk about the story, I should mention that I’ve only read this book once. For all my previous reviews, I chose books that I’d read before. If these reviews have a theme, after all, it’s “good books you probably don’t know about,” so I started with some stories I remembered fondly. With this one, I checked to make sure it was the first of a series (the other two are The Witches of Wenshar and The Dark Hand of Magic) and bought it.

As the book begins, the mercenary captain named Sun Wolf is approached by a woman named Sheera, native of the city of Mandrigyn. Mandrigyn has been conquered by Altiokis, wizard, tyrant, apparent immortal, and all-around evil overlord. 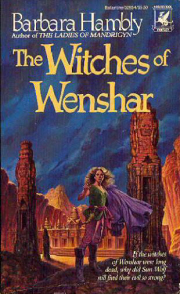 Sheera wants Sun Wolf to free the men of Mandrigyn from their slavery in Altiokis’s mines so they can lead an uprising, free the city, and overthrow the wizard. Sun Wolf, who has no use for lost causes, refuses and sends her away. As all this occurs, we also meet his second-in-command, a woman named Starhawk, and his eighteen-year-old concubine Fawn.

Sheera (who, at this point, feels like more of a hero than Sun Wolf) comes up with a new plan. Kidnap Sun Wolf, poison him, keep him under control by threatening to withhold the antidote, and have him train the women to fight.

It’s an especially daring plan because Mandrigyn, before its conquest, was not an especially liberated society. Women went veiled when they went out at all.

It’s at this point that the book started to grow on me. The women of Mandrigyn are impressive. The prostitutes have set up a spy network, passing word to and from the men in the mines. The more respectable ladies have taken over the city’s businesses despite their previous sheltered status. And, of course, quite a number of them undergo Sun Wolf’s version of basic training, which is just as rigorous as you’d expect.

What’s more, Sun Wolf himself begins to warm to them — not Sheera, since she’s holding him prisoner, but to the rank-and-file female soldiers. In the meantime, 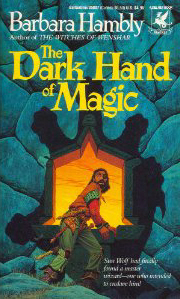 Starhawk and Fawn look for Sun Wolf, and Starhawk begins to learn a lesson of her own: that burghers and merchants are often decent people in their own right, not faceless sword-fodder. Both Sun Wolf and Starhawk experience real growth throughout the story. By the end of the book, Sun Wolf becomes truly heroic rather than antiheroic.

The worldbuilding is competently done, laying plenty of groundwork for all the plot points. Some of those plot points are unfortunately predictable. For instance, wizards are empowered by something called the Great Trial, the details of which are long forgotten; I figured it out some time before it came up in the story.

This isn’t always a problem, however. Working out the origins of the nuuwa (eyeless humanoid monsters) doesn’t make them any less creepy — rather the opposite, really.

I have to admit that some parts of the writing continued to bother me throughout. Sun Wolf has unusual yellow-gold eyes, a fact which is mentioned many times, and I got rather tired of being reminded. A very minor character is named Idjit for no reason I can perceive. And, of course, there are adjectives upon adjectives.

In the end, I would have preferred a different editor for this book — but I’m still going to hunt down The Witches of Wenshar at my local used book store.

Isabel Pelech is the author of “The Wine-Dark Sea,” from Black Gate 14. Her last review for us was The Hero and the Crown by Robin McKinley.