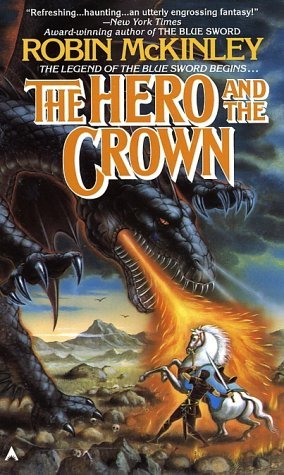 Almost two decades before The Hero and the Crown begins, we are told, a witch seduced the king of Damar.

She married him, bore a child, and then died of disappointment when the child turned out to be a girl, unlikely to take the throne and fulfill her ambitions. Or, at least, that’s the version of the story that everyone knows.

The protagonist of the story is that daughter, a young woman named Aerin. I have to admit to some positive prejudice here: the maladjusted princess is a favorite archetype of mine, and Aerin fits it perfectly. Awkward, prickly, shy, taller than all the other women around her, an outsider in her own family and to her own court — it’s even mentioned that her embroidery is lousy, which has gotten to be a little bit of a cliché.

But she’s also determined, kind, brave, and — interestingly — thinks very scientifically for a quasi-medieval person, so even if you don’t like princesses with problems, I believe she’s a relatable hero.

Shortly after the story begins, we get an extended flashback explaining how she came to her current place in life. At fifteen, Aerin hadn’t yet manifested the magical gifts that mark Damarian royalty. To prove to her cousin Galanna that she truly had royal blood, she ate some leaves from a plant that was supposed to be deadly poison to all those outside the royal family — and nearly killed herself.

During recovery, she befriended and rehabilitated her father’s old warhorse, which was injured long ago.

(To the book’s credit, this is not a miraculous cure. The horse’s bad leg continues to give him trouble, sometimes at critical moments, and it’s mentioned that he probably couldn’t bear the weight of a full-grown man.)

Also in the course of her recovery, she finds some interesting accounts in a history book and decides to take up dragon-slaying. 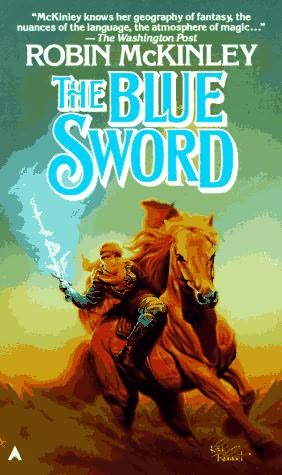 This is the place where Aerin’s scientific bent comes into play. In her history book, she discovers a recipe for a fireproofing ointment, the key to killing dragons single-handedly.

But it isn’t as easy as mixing up a batch and riding off on her white steed, because the recipe is exactly what you would expect from something out of an old book: it’s vague. She has to work out the proportions of the herbs herself, taking notes on each recipe she tries, testing each sample on a splinter of wood, and making a note of all the failures.

It’s also worth noting that Damarian dragons are smallish wild animals — at first. As Aerin struggles to prove herself, Damar drifts slowly toward catastrophe. The country is under subtle magical attack from the north. Bad luck abounds.

Eventually, the legendary dragon Maur starts pillaging the countryside, and he lives up to his reputation. Maur is epic. Maur is everything a dragon should be. The battle with Maur would make a suitable climax for any story, and it’s only halfway through the book.

I have to admit that the first half of the book is my favorite and I’m not sure why. Possibly it’s because the second half features far more magic. I don’t object to magic — if I did, I wouldn’t read or write fantasy — but to me, the feel of the second half clashes somewhat with the low-magic first part.

Or perhaps it’s because Aerin has some of her problems solved for her, most notably by the magical sword Gonturan. Also I felt that at the end, the villain still had the potential to threaten Damar for some time — for reasons that I can’tt get into for fear of spoilers.

Those objections aside, this is a good book for anyone who wants an epic tale which still sets aside time for smaller details, like the difficulty of rubbing down a horse with greasy, smelly fire-proofing ointment.

It also serves as a prequel for The Blue Sword, which was named after Gonturan and takes place some centuries after The Hero and the Crown.

Isabel Pelech is the author of “The Wine-Dark Sea,” from Black Gate 14. Her last review for us was The Door Into Fire by Diane Duane.

The only book i’ve read my McKinley is Outlaws of Sherwood. An excellent book that puts a new spin on robin hood. I highly recommend it. But then again i kind of have an obsession with robin hood books so its kind of an unfair opinion.

Goodness! I love McKinley. I’ve read everything by her that I could get my hands on – multiple times! And ever since the new Robin Hood movie came out, I’ve been getting a jones to read Outlaws of Sherwood (which they really should’ve consulted before making another beefcake-heavy movie; not that I’m complaining, because, Russell Crowe, you know… Yum), but I lent it to somebody and I can’t think to WHOM!

And as much as I adore Hero and the Crown (ALL parts, including the second, ’cause the second has LUTHE, and I LOVE Luthe!!! At least, I think he’s name is Luthe. Pretty sure), I love its sequel THE BLUE SWORD even more. And I love how there’s bits in Deerskin that reference Hero and the Crown AND The Blue Sword. Love, love, love.

I reread all these books at least once a year.

I first read outlaws of sherwood in like 7th grade. i’m 21 now and i was trying to hunt the book down..problem was i didn’t know the author or the title. eventually i found it. I think i start out by googleing “robin hood can’t shoot a bow”

Black Gate » Blog Archive » A Review of The Ladies of Mandrigyn, by Barbara Hambly