I love writing.  I love the swirl and swing of words as they tangle with human emotions.
— James Michener

So you’re ready to embark on writing your new fantasy story, hopefully one that the folks at Black Gate will want to snatch up as soon as you type the words “The End” on it.

You’ve got your story idea, sitting there like a lump of Play-Doh that still conforms to the shape of the plastic container you just shook it out of.  You know, that perfect cylinder shape that is exciting to absolutely no one.

Time to start squishing and pulling and twisting. But where to begin, you ask? It all starts, of course, with your main character.

As we discussed earlier, most people tend to start a story with a person, in some sort of situation. But let’s just say you haven’t even gotten that far. You just have an average person, sitting in a white room. Nothing’s happening.

Let’s start by getting inside that character’s head. Which you can do most effectively by asking questions:

For the sake of illustration, let’s take the main character from the story Jay Lake and I concocted for Black Gate 14: Lena from “Devil on the Wind.” 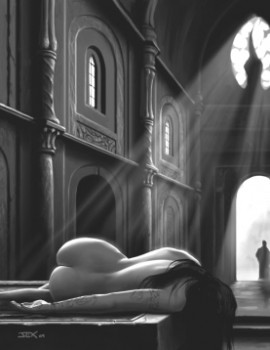 Sort of a nasty piece of work, that Lena, eh? This is quite literally a woman who’s willing to die to increase her power — and in the first scene, she just does just that. This is her fifth suicide. Ah, fantasy fiction, where anything can happen. Welcome to the funhouse!

And because it’s first-person, we’re right there inside her head. We slowly get her backstory, and hopefully start to understand why she’s so consumed with the need for vengeance (her mother’s violent death plays a large role in Lena’s current bloodthirsty mindset).

So we have a character who craves power. Because you want conflict in your story to keep the reader hooked, think of something that would make Lena’s life miserable. Ask those questions.

How about being told what to do? Being given a lowly task? Having to embark on a journey with the nasty fellow named Rego, who saw her at her most vulnerable state? How ’bout all that?

So there’s your internal conflict — Lena has to work hard on their journey toward the distant Prince Falloe’s keep to not give in to her urge to kill Rego. She’s also trying to come to terms with her mother’s death and her own unsettling sense that she’s following in her mother’s footsteps.

The setting provides another series of external conflicts — because this is fantasy story set on another world, Jay and I got to call in all sorts of great creatures to menace Lena and Rego on their travels. In a way, the setting becomes a character as well (think of the island on LOST, for example) as it leaves refuse-spewing automatons and zombies and poisoned rivers in our hero’s path.

Now, my friends, we have a lovely mix of internal and external conflict — a character caught in a situation from which she desperately wants to break free (performing errands for her superior, unable to exact revenge on the man she despises), traveling through a violent world full of deadly creatures and double-crossing princes.

Sometimes a story focuses too much on the intricacies of the world-building, where you find yourself moving through a travelogue of the place, getting a guided tour — which can be great if you’re not trying to get your heart racing and your blood boiling. 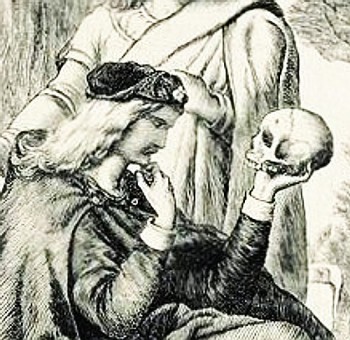 Other stories may get caught too long inside the protagonist’s head, and nothing really happens as a result. They end up thinking overmuch, like Hamlet. To protag, or not to protag, that is the question…

Instead, as a writer, try to hit that sweet spot by mixing internal conflict, where you are following a character whose life is out of equilibrium and flailing for balance, with the harsh reality of a world that doesn’t care what happens to that person, and may even be actively trying to destroy him or her (or it!).

Think of it as two quests happening simultaneously — one on the inside, the other out in the physical world. You may even want to map out where the character’s internal state is at the start of the story, and how it changes as the plot progress all the way to the end. By the end of the story, what impact of the events of the story had on your protagonist. Has he/she/it been changed by it all? I certainly hope so!

Keep working at it, and before you know it, you’ll get your story shaped into its final form, and it definitely won’t look like a tube of Play-Doh anymore.

Michael Jasper has published over four dozen short stories in Asimov’s, Strange Horizons, Polyphony, Writers of the Future, Interzone, and other fine venues, including Black Gate. His most recent novel is A Gathering of Doorways (Prime Books, 2009).

[…] writing series “Climbing Onboard the Dragon” and “On Writing Fantasy”.  This latest entry by Michael Japser talks about climbing into your protagonist’s head to shape the conflict of […]