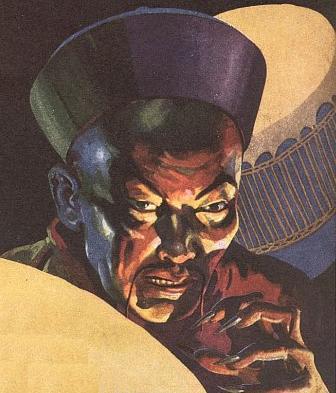 “The Knocking on the Door” was the tenth and final installment of Sax Rohmer’s serial, Fu-Manchu.

By the time it was published in The Story-Teller in July 1913, it had already appeared a few weeks earlier in book form as Chapters 27-30 of Rohmer’s first novel, The Mystery of Dr. Fu-Manchu (re-titled The Insidious Dr. Fu-Manchu for its subsequent U. S. publication).

“The Knocking on the Door” starts off with Dr. Petrie and Nayland Smith grieving the terrible loss of Inspector Weymouth.

There is little comfort in Weymouth dying a hero, despite his having taken Dr. Fu-Manchu with him to a watery grave.

The Inspector was denied his dignity during his supreme act of self-sacrifice, for he died a victim of Dr. Fu-Manchu’s madness-inducing bacilli.

In his anguish, Nayland Smith gives vent to one of his most hateful pronouncements, “Pray God the river has that yellow Satan….I would sacrifice a year of my life to see his rat’s body on the end of a grapping iron!” 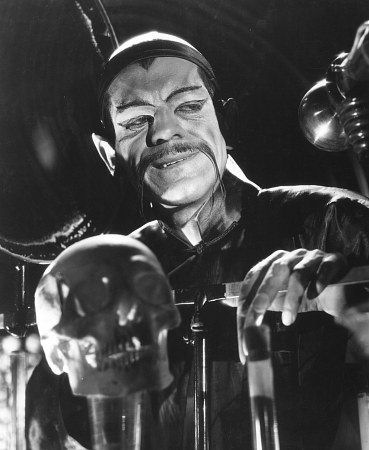 Time and again, it is Nayland Smith and no other character who gives voice to the racist remarks that make contemporary readers squirm in discomfort.

Considering that Smith is Rohmer’s imperialist character – a colonial administrator for the Crown – it is likely this was a deliberate decision on the part of the author to paint the character as intolerant, in contrast with the narrator who has fallen in love with an Egyptian.

As the series progresses, Rohmer’s narrators will frequently enter into interracial relationships in spite of their association with the bitter and misogynistic Smith.

Despite Fu-Manchu’s seeming death, his organization is still alive and well. Consequently, Nayland Smith has Karamaneh and her brother, Aziz, placed under police protection. Karamaneh, feeling safe to cooperate with the authorities for the first time, confesses all of her considerable knowledge of Dr. Fu-Manchu’s hideouts and resources in the East End and along the Thames.

In a rare personal touch, Petrie has the unpleasant task of meeting Inspector Weymouth’s widow and his brother, James. In the conversation with Weymouth’s brother, Smith offers not only another description of the Devil Doctor, but an interesting twist on his origin that is unique in the series:

“Dr. Fu-Manchu was the ultimate expression of Chinese cunning: a phenomenon such as occurs but once in many generations. He was a superman of incredible genius, who, had he willed, could have revolutionized science. There is a superstition in some parts of China according to which, under certain peculiar conditions (one of which is proximity to a deserted burial-ground) an evil spirit of incredible age may enter into the body of a new-born infant. All my efforts thus far have not availed me to trace the genealogy of the man called Dr. Fu-Manchu. Even Karamaneh cannot help me in this. But I have sometimes thought that he was a member of a certain very old Kiangsu family – and that the peculiar conditions I have mentioned prevailed at his birth.” 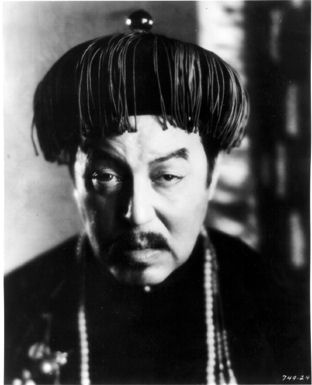 James Weymouth then reveals that his brother’s widow has been terrorized by some cruel prankster who has been knocking on her front door in the middle of the night ever since her husband’s death.

Rohmer’s set-up of the titular event is too rushed for this ghost story to prove effective, and there is little doubt as to the identity of the mysterious individual haunting the Weymouth residence.

Before Smith and Petrie can keep vigil with Mrs. Weymouth, they learn that Aziz is convinced that Dr. Fu-Manchu is staying in the same hotel as he and his sister. Upon investigation, the new arrival is revealed to be Professor Jenner Monde, the celebrated Orientalist who has just returned from the East.

Assured of Karamaneh and Aziz’s safety, Smith and Petrie set out for Weymouth’s home to witness the ghostly visitation in person.

Of course, it comes as no shock that the ghoulish bedraggled figure they find knocking on Weymouth’s door in the middle of the night is the Inspector himself. Weymouth lives, but is the shattered shell of the man he once was.

Only quick thinking on Smith’s part (by immediately ordering the arrest of Professor Monde) saves the day. Professor Monde, of course, is Dr. Fu-Manchu in disguise. 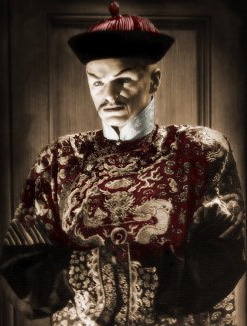 The Devil Doctor agrees to restore Weymouth’s sanity and succeeds in doing so, but he subsequently sets fire to the cottage where the Inspector is recuperating and makes his escape. Smith, Petrie, and Weymouth barely escape the blaze with their own lives.

The storyline at last reaches its conclusion after ten long months, but not the ending readers anticipated.

Smith returns to his post as Police Commissioner in the British colony of Burma; Karamaneh and Aziz return to their native Egypt leaving a heartbroken Petrie behind; and Dr. Fu-Manchu sends Smith and Petrie a telegram as a parting shot to confirm he did not perish in the flaming cottage:

“I am recalled home by One who may not be denied. In much that I came to do I have failed. Much that I have done I would undo; some little I have undone. Out of fire I came – the smoldering fire of a thing one day to be a consuming flame; in fire I go. Seek not my ashes. I am the lord of the fires! Farewell.”

It was a compelling ending and one that, in spite of the many improbabilities of the story, seemed somehow more real for its lack of finality and bittersweet sting. It does not end with Petrie getting the girl or Dr. Fu-Manchu being brought to justice. This was not what readers had come to expect. 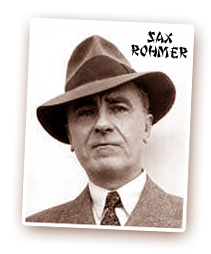 Rohmer’s fascination with the East and groundbreaking decision to offer an interracial romance pointed to the author’s desire to throw away the rule book.

As the series progressed, Dr. Fu-Manchu would become both more honorable and sympathetic. Time and again, Rohmer’s narrators would express their wish that he would switch to their side. There is little doubt that in the waning days of the British Empire, Sax Rohmer held a critical view of his nation’s imperialism.

This noteworthy fact is overshadowed by the author’s lifelong passion for the East. It is both his critical view of Britain and his love of the East that fueled his ability to continue the series for nearly fifty years.