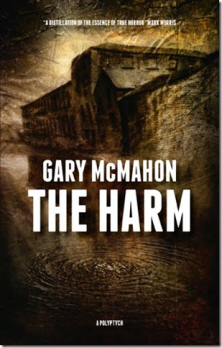 TTA Press, publishers of Black Static, Interzone and Crimewave magazines as well as a few books, has launched a (potential) new line of exclusive novellas, beginning with Gary McMahon’s The Harm:

We hope that this will be the first of many TTA Press novellas, stories that you’d expect to see in Black Static and Interzone but are just too long for the magazines. They will be of varying lengths, and many we expect will be much longer than The Harm, but each one will be priced the same, just £5. In time, we hope to offer subscriptions to these novellas and offer significant savings.

The Harm is aimed at the Black Static audience, i.e., horror.  The story depicts the not unpredictable intertwined fates of three now grown up victims of particularly gruesome (though the adjective may be a redundancy) child molestation, as well as that of a sister of one of the casualties.

The title intends to convey not just the horror of physical and sexual abuse of children (and, actually, the narrative is not, thankfully, directly concerned with detailing this) but the harm to all those who survive.

While there are some surreal elements, it’s not clear, and maybe besides the point, whether these are indeed supernatural events or  take place in the fractured psyches of the affected.  I can’t say I liked this story, as no one (at least no one I’d consider a rational human being) can be said to like a story with this subject matter.  The author notes in an afterword that the impetus for the novella was a way to “exorcise” his thoughts on the relentless barrage of media reports regarding abused and tortured children.  Even if we are not directly involved in such horrors, we are affected by them simply be existing in a reality where such things happen with more regularity than we’d like to believe possible. Fair enough.

But, for this reader,  The Harm fall short because of the obviousness of what is being said here. If the purpose of horror is to shock us into some realization, however repugnant, of the reality of human existence, this struck me as, in the famous words of Bob Dylan in commenting on the  songs of Phil Ochs, as “just journalism.”  Yeah, this is life scarring stuff.  Yeah, it’s not likely to lead to happy and productive lives. Yeah, people who have been touched by this are likely to have a disdainful view of those who just don’t get it. While there is supposed to be a catharsis in the sister of one of the victims realizing the shallowness of familial and society institutions, it’s not particularly profound, perhaps because a novella involving four protagonists doesn’t have the luxury of extensive character development upon which to develop such catharsis.

I get what McMahon is saying here. Any “normal” person will. I’m just not sure that if a point of storytelling is to get us to think about something we might not ordinarily consider or sympathize with, then I don’t quite get what this story is trying to tell me besides what I already know (even as I shudder to think about it).

[…] Here’s another take on Gary MacMahon’s The Harm, which sees a lot more in it that my own lukewarm review. […]