So Echo Bazaar, the free browser game set in the Fallen London, “a mile underground and a boat ride from Hell,” is a fantastic diversion. (I’ve mentioned it before.)

One of the things I love about it is that, despite its pseudohistorical goth neo-Victorian/steampunk setting (it’s like what might happen if steampunks discovered black), it’s not all that hateful about sex.

And with history, at least you can rely on being accurate: with fantasy there’s a whole nother element where you have to be plausible, which basically means subscribing to historical fanon. There were black people living in Victorian London, but if what you know about it comes from seeing fifteen different versions of A Christmas Carol, you’ll probably think that the Repentant Forger is an example of unrealistic political correctness. 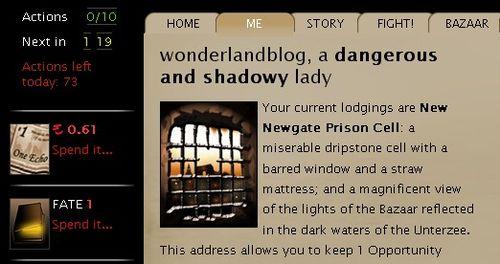 Echo Bazaar does a pretty good job of walking that line with regards to sex. It is true that the Artist is a young man whereas the Artist’s Model is a young woman and all the Masters of the Bazaar are addressed as Mr. whereas all the people selling sex in Spite are women in scarlet stockings (as if the Victorians had never heard of rent boys!)

But the Implacable Detective is a woman and so is the spying Tattooed Courier and so is the smuggling Gracious Widow and the point is, in Fallen London, women exist and visibly go about their business.

You may have noticed yourself that a sizable proportion of the people in the world are women, and my understanding is that even in the Olden Days that was actually the case.

Which is why I was annoyed by the Comtessa storyline. Spoilers beyond. 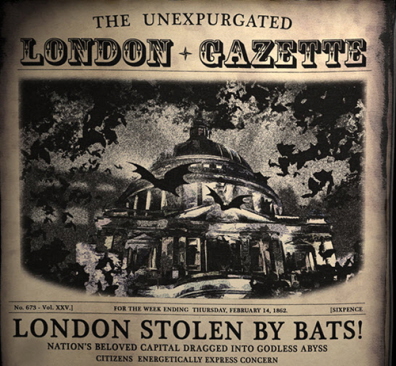 One of the characters in the game is a willful heiress who wanders the city and eventually goes missing. You are hired by her father to find her.

Eventually you discover her deep below the city, in the company of the Clay Men, including the one who was her father’s butler. She is in the process of being turned into a Clay Man and cannot speak.

According to the butler (whom you have previously run into, and deduced that he cares for her) they are in love and ran away: here she can become one of his people, and they can be together.

You look at her. Her frightened green eyes stare out of the clay at you.

What the game doesn’t tell you: Is she afraid because she’s becoming a Clay Woman? Because she was kidnapped? Or because she and her lover have been found?

No clue. You’re only given the choice whether to take her back or leave her there.

What I find irritating is that if you choose to leave her there, your Heartless score rises. The game offers you no way to accept that she seems to be a young woman with a good deal of determination and respect her right to choose her destiny. You can only treat her as an object: your choices are to either take her father’s money to try to bring her back, or her lover’s money to leave her there. 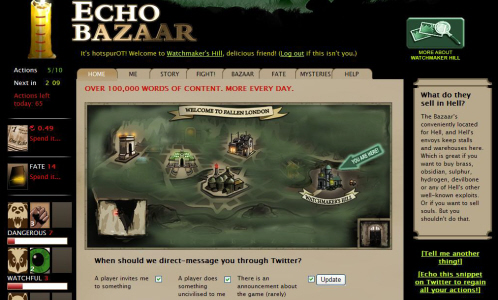 And that’s the irritating trap that the game otherwise does a very good job of not falling into: too much period writing acts as though the myths which a period tells about itself actually reflect the truth about that period. As though in times when very few women show up in the long historical lists of wars lost and wars won, that means there are very few women around. As though in times when the legal status of women is that of property traded between fathers and husbands, that means that actual women behave as passively as furniture.

But as I say, that’s an exception: mostly the game deals with sex in a light-handed and enjoyable way. It is very deliberate that right from the beginning you can choose to play as a man, a woman, or an individual of mysterious and indistinct gender.

Furthermore, it’s delightfully epicene in its conception of you the character as a sexual being. You are welcome to attempt to seduce either the Artist or the Artist’s Model or both!

When your ex-lover asks you to help get rid of a too-importunate suitor, you can tell him to back off with threats of violence, or simply draw his attention away to your own fine self. Failbetter Games is knowingly trying to be cool with this. I consider that it’s working.

Hi Vito. Thanks for a thoughtful post: you neatly pinpointed the twin difficulties of historicity and plausibility that give us a permanent joint migraine.

A minor correction that doesn’t really affect your main point: the choice is to leave the Countess or ‘free’ her by smashing her. Returning her to her father isn’t an option. We thought you were right on the Heartless bump, though, and we’ve actually changed the storylet accordingly. More here: http://blog.failbettergames.com/post/Dissecting-the-Comtessa.aspx

Wow, that’s really good to hear! I think it does make the storylet better.