Back in May I told you all about cyber-stalking little Barry Guiler, that adorable little tot from the movie Close Encounters of the Third Kind (now apparently referred to as CE3K by you unbelievably cool kids).

I also let you know that though at the time I had turned up a fat lot of nothing in my attempt to contact Barry, who is Cary Guffey in real life, something told me I was eventually going to meet with success. I mean, what little I had read about Cary seemed to point to him being a nice normal guy, which by default meant he was likely the opposite of that other child actor I tried to interview who by all on-line accounts is a bit of a tool.

So for three weeks I busied myself rearranging my voodoo dolls and abusing my new crop of interns, all the while hoping for pay dirt in the form of an email from Cary. So I would be spared from looking like a hopeless poser who spends a lot of time writing about great interviews, without ever closing escrow.

Well, today I am here to tell you that though I may indeed be a grade-A cyber stalker, I am definitely NOT a poser.

Cary Guffey did get in touch and he is indeed a nice guy; actually a really nice guy with a great sense of humor. And since none of you believed I’d end up interviewing him and therefore didn’t send in any insightful and provocative questions, I was forced to make up my own.

A conversation with Cary Guffey 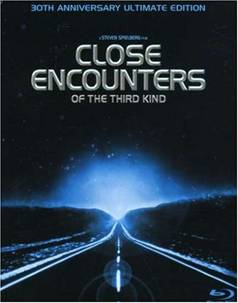 Cary, I’m really excited to chat with you considering how miserably I failed in my attempt to rouse even the slightest interest from Danny Lloyd (the kid from The Shining).

So the funny thing is, the second script I was sent was The Shining. My parents decided I could not be in anything I could not see [The Shining was rated “R” – GC]. That drove my agent crazy. I never was as productive as she would have liked.

So what have you been up to since 1977 when CE3K was released?

Since 1977, I moved to the Midwest, then the Northeast, decided it was too cold and headed back South. I graduated from the University of Florida. Taught for a Children’s Museum. Water-skied for a couple of years and got really tired of being broke so I went back to school and earned a MBA. Somehow I ended up telling people what to do with their money [Cary is a financial advisor – GC.]

I have always loved soccer and hope one day that the USA will actually be a threat in the World Cup. Even before I had children of my own, I have tried to teach this beautiful game the right way. I married a super lady and we have two wonderful sons. They take up whatever time I am not working.

How did you end up acting at such a young age?

I was in a pre-school class in Douglasville, Georgia in 1976. The casting director for CE3K, Sherry Rhodes, had a niece in my class. The movie was being filmed in Mobile, Alabama, so Sherry had taken a break to come see her sister, Judy. One afternoon Judy was busy, and asked Sherry to go pick up her niece from pre-school. I happened to be having an incredibly cute day and caught her eye and a few weeks later, I was in the biz.

Your IMBD profile shows you acting for the last time in 1985. Was it your decision to stop at that point? At 13 years old I would think this would have been the perfect time to capitalize on the whole Hollywood thing for dating purposes.

We moved from Atlanta to St. Louis when I was 12. I developed mad acne and needed braces thanks to genetically crooked teeth. The cute kid, alas, was no more, so good-bye Hollywood.

Do the people you hang out with now, know you were in CE3K? And if so, do they give you grief about it?

College was brutal for those who knew about Close Encounters. To say I was given grief was an understatement. To this day, one of my best friends likes to tell people I was ET.

I hate to say it, but that’s hysterical. In a People magazine interview from some years back they talked about Steven Spielberg attending your wedding. Do you still keep in touch with him or any of your co-stars from your previous projects; like does Richard Dreyfuss show up at your summer barbeques?

Spielberg sent a wedding gift, but did not attend the wedding. I have not kept in touch with Hollywood. Seems life is busy with a wife, two kids and a dog.

I read you have two young sons.  Have they seen you on screen and if so, what do they think about it?

We let the boys watch Close Encounters not too long ago. The kid in the movie looks a lot like both of them. The Guffey blood line is pretty strong.

They liked it okay but still prefer Star Wars. Blast you George Lucas!

Do your sons have the acting bug?

My boys are great thespians when they are in trouble.

Even though you’ve found success on a completely different career path, does it still seem cool to have an IMDB profile and be part of pop culture? Or would you prefer not to be forever associated with CE3K?

CE3K is a tremendous blessing. I met the Queen of England. I mean, are you kidding me? I was born in Gadsden, Alabama and I helped present an award at the American Music Awards! Oh, and I met Ray Charles. THE Ray Charles.

I also spent time at Burt Reynolds’ house in Georgia. I took my fourth grade teacher, which was a mistake. It was the moment I lost respect for adults, as she was so star struck by Burt that she could not put a sentence together. 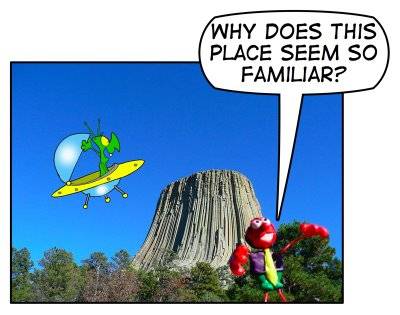 I understand Mrs. Guffey owns a cake decorating business that is worthy of the Food Network. Tell the truth, has she ever made you a cake depicting Devil’s Butte? [The flat-topped rock formation where the alien ship landed in CE3K]

Michelle has a talent for cake. Unfortunately, I am more of a candy and cookie guy. It is sort of like the old saying, no meat for the butcher’s children.

Considering you were only four when filming wrapped on CE3K, do you have any clear memories of the experience? If so, what is your favorite?

I do not have a complete set of memories from the filming of Close Encounters. It is more like bits and pieces; like it was a really muddy set, so I was carried from wardrobe to the filming site.

I do remember the last scene when I say “Goodbye.” Spielberg told me my friends were going away. I thought he meant my friends back in Douglasville. Keep in mind, a few weeks prior, I was hanging out learning how to color in the lines and now I was on a hot movie set in lower Alabama in the middle of the summer and this guy was telling me I could not go home.

I started to cry. This made Melinda Dillon, my mom in the movie, cry, which in turn made everyone else cry. Or maybe they were just sweating.

So there you have it. Hollywood did not leave little Cary Guffey to the obscure Sci-Fi convention circuit or the

hopelessness of Celebrity Rehab. Instead Cary left Hollywood to build a career in finance while he waits for the US to take a World Cup. Since the Black Hawks just took the Stanley Cup, I believe anything is possible.

And though I may not call Close Encounters of the Third Kind “CE3K,” I do have little Barry Guiler’s email address which I definitively think qualifies me as one of the cool kids. So a huge “thank you” to Cary Guffey for spending some time with us here at Black Gate!

Now, has anybody seen little “Newt” from Aliens…?

Have a weird comment, an obscure idea or some bad poetry?  They now have a home.  Send an email to Goth Chick and give those lazy interns something to do: sue@blackgate.com

[…] up to Star Wars and Close Encounters of the Third Kind [GC: We’ll have to clue him in that it’s CE3K if you’re a cool kid]. It’s a cliché, I know, but those two films pushed me over the edge, […]

[…] and art.  I’ve introduced you to the guy who sound-tracks Hugh Hefner’s Halloween parties, the abducted kid from Close Encounters and a zombie-blasting, 80’s pulp-fiction […]