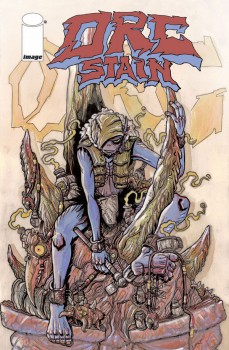 “And the Orcs took the fortress on the west slopes of Mount Rerir, and ravaged all Thargelion, the land of Caranthir; and they defiled Lake Helevorn.”
–J.R.R. Tolkien, The Silmarillion

Orcs seem to be popping up everywhere these days. I’ve done my share of complaining about this. I’ve raved about how Orcs should be kept in Tolkien books…after all, he invented the beasties as a counterpart to his magnificent Elves. (Nevermind that that actual word “orc” existed before in reference to a water-monster.) Today there are even entire novels dedicated to Orcs.

And, to my great delight, at least one spectacular comic book.

ORC STAIN is the creation of writer/artist James Stokoe, and is published by Image Comics. This series “For Mature Readers” is a brand-new offering, with only two issues on the stands so far. However, it grabbed my attention on both a story and art level (a seemless blend) and quickly rose to the top of my must-read list. In fact, any fan of fantasy adventure fiction, sword-and-sorcery, dark fantasy, monster comics, or simply Those Who Dig Orcs owes it to himself to read this amazing experiment in non-corporate comics. 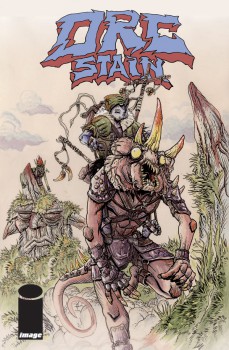 It’s not just Stokoe’s fantastic hyper-detailed art, which evokes a strange and savage world populated entirely with various vicious Orc tribes. It’s not just the writing, which is clever, profane, full of humor, wild invention, and ruthless action. It’s not even the fantastic colors (also done by Stokoe) which bring the Orc-world to life. No, it’s the synergy of all these things together that makes ORC STAIN a book that stands alone as a masterpiece of comics storytelling in the making.

The book focuses on One-Eye, an expert safe-cracker and thief fleeing the war-torn south on a quest for his next big score. The “safes” in this world are bloated organic beings much like a cross between an ogre and a giant teddy bear. In fact, most of the implements, armor, and tools the Orcs use in One-Eye’s world are the bones or remains of once-living creatures. This is a world where the Orcs have conquered literally everything…and now are turning on themselves because, well, they have to slaughter somebody.

Here’s a taste of the opening exposition:

“For a million millennia the world has cracked and convulsed under the indomitable mob of the Orc. Savage, bloodthirsty creatures, they are without number, staining nearly every corner of the globe…innumerable but eternally divided… No Orc empire has ever stood the test of time, it’s warlords ultimately turned upon by the fractious nature of the mob… But now, in the southernmost jungles, the swelling epicenter of Orckind, a powerful new chieftain has risen.” 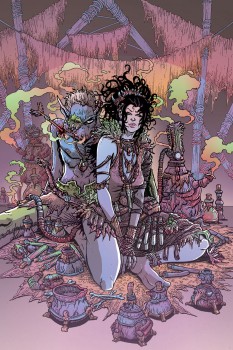 The first issue features a heist caper that introduces the southern conflict—a warlord is assembling his troops for the war to end all wars—and shows One-Eye doing what he does best. He’s been partnered with a crude, mangle-faced Orc named Pointyface. They’ve been hired to bring back the goods for an Orc gangster known only as The Norman. Pointyface is more interested in frolicking with a Love Nymph than helping with the caper. The world is full of hills and mountains carved into the massive heads and faces of famous Orc conquerors. Imagine thousands of Mount Rushmores with monster faces…some filled with lost treasure for those who know how to find it.

ORC STAIN is rude and crude, just like its subjects…but you get the sense that One-Eye may be a sensitive soul trying to survive in an Orcish hell where he’s expected to be nothing more than a brute. It’s hard not to like this soft-spoken rogue: “Most Orcs just like to hit things. I like to open ‘em.” One-Eye is a fascinating protagonist because he seems more human than your average “kill ‘em all” traditional Orc. I hope to see Stokoe exploring One-Eye’s moral/spiritual disconnect with this brutal world in future issues.

Anyone who remembers the grand epics of Phillipe Druillet from the old HEAVY METAL magazine will dig the artistic approach Stokoe applies here. Likewise, fans of Jack Kirby will see a similar bombastic sense of invention in these colorful pages. There’s also a bit of Geof Darrow, a touch of Paul Pope. The art is eye-popping, and the colors are rich and expressive. Also, every issue so far has featured an original art piece on the back cover, and the inside-front cover. 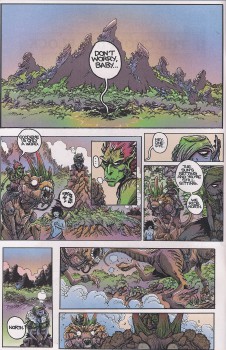 The second issue features the return of One-Eye and Pointyface to The Norman. Disappointed by their performance, he orders One-Eye to the block, where an executioner is going to chop off his “gronch,” the most common and feared punishment in town. (It doesn’t take long to figure out that “gronch” is the Orcish word for the male reproductive organ.) The bulk of this issue explores the exquisite tension building up to the axeman’s swing and how One-Eye manages to keep his gronch. (Come on, you knew the main character wasn’t going to get his junk chopped off in the second issue, right?) This issue also develops more of One-Eye’s terrifying world and shows the dynamics of Orc-to-Orc social relations. (It’s mostly based on the gronch, and the chopping of said gronch.)

Whether you’re into comics or not, you owe it to yourself to check this one out. Hit your local comic store or try www.milehighcomics.com for easy online ordering.

Comics this different, this weird, and this unique don’t come along too often, so get in on ORC STAIN while it’s still around. 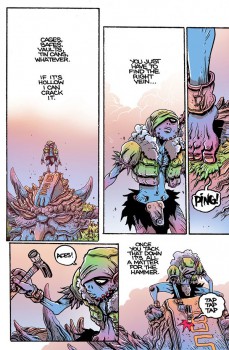 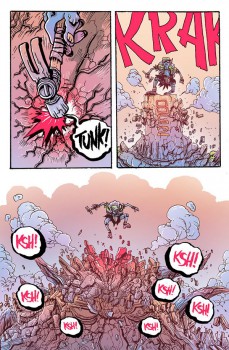 Wow – this looks great. Why doesn’t my comic shop carry it?

I need to find someone to complain to.

I can answer that! Smaller comics shops (and even some big ones) won’t order independent titles unless there are “big names” involved on the creative team. So you have to request a book like ORC STAIN–retailers won’t order comics that they think won’t sell. I’m luck in that my comic dealer will order some indie stuff…not everything, but he does take a risk sometimes. But it still pays to keep my eyes on the comics scene so I can request any below-the-radar comics I want him to stock.

Well, awright. I’ll give it a try!

Okay! That’s a comic I’ll consider buying. The artwork alone is worth it.

Note: Any way they can just sell it as a .pdf file? No clutter, no dead trees, and save the customer $ but still get more $ than it being at the comic shop.

Please don’t “Watermark” or “Lock” it, the hackers defeat these in a second and it makes the honest people feel like fools. If you are worried about “Sharing”, just hide a tiny number somewhere in the code of the file, like one thousand lines into the data there’s the “Neutral Comment” tag and a serial number is inserted (I’m sure Adobe would help!) that changes for each and every sale. That if someone uploads it, you can track who bought the original copy.

Frankly, I’m cutting back my “Collection” of comics, getting with the times to brace to move deliberately/necessity to smaller quarters and I don’t want to drag that many comic boxes with me. But with current computer memory, a few external HDDs hold tons of stuff:-)

A lot of comics are “going digital” these days, but its’ up to Image Comics whether or not they sell ORC STAIN electronically. You can e-mail them at http://www.imagecomics.com and let them know you’d like ORC STAIN in electronic format. Today, especially with the iPhone and iPad being so popular, a lot of comics publishers are trying to reach that market. Meanwhile, you’ll have to get a hardcopy from your local comic shop! (It’ll be worth it.)