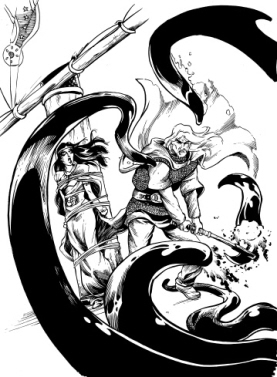 The Sorcerer’s Guild announced this week that John C. Hocking’s “The Face in the Sea” (from Black Gate 13) has been nominated for the Harper’s Pen Award (formerly the Ham-Sized Fist Award).

The Harper’s Pen Award honors the best Heroic Fantasy or Sword and Sorcery short fiction. The award is sponsored by The Sorcerer’s Guild. The stated goal of the award is “to encourage authors to continue to explore heroic fantasy and sword and sorcery fiction, as well as to reward those who continue to publish it.”

Special shout out to Black Gate Contributing Editor Bill Ward, for his nomination for “The Last of His Kind.”

There’s some fine publications on that list.  If you like heroic fantasy, I hope you’ll take the opportunity to try a few of the links above and, if you like what you see, support one of our sister magazines. Me, I’m going off to read some more Heroic Fantasy Quarterly.

Congratulations to all the finalists!  The winner will be announced next week.

Me, I’m off to read some more Rage of the Behemoth 🙂

Congrats to a terrific list of names and publications!

I would, but I already finished it! 🙂

Congratulation on the nomination for RotB, Jason. This makes us competitors, doesn’t it? Is it time to start up a betting pool?

It is great to be nominated. Good luck to all (but better luck to me!) 🙂

Hey Michael! Congratulations on the nomination.

I’ve been curious about DARK WORLDS. The contents and covers look great. Is it POD (print on demand)?

Ha! Well it seems that someone has already wagered with your illustrious Contributing Editor, but…what the hell? I’m confident in my man’s material 🙂 Bring it on Mr. O’Neill!

Shall dinner at Windy City be the prize?
~
As for Dark Worlds, it’s a fun one, it is POD via LuLu, and Frederick Tor should make an appearance in there some day, if I can ever get the bum at the typewriter again.

We’ll use Bill Ward’s rules. If neither of us wins, we go Dutch. 🙂

Hey — the winner was just announced — and it’s BG and John Hocking’s “The Face in the Sea.”

I don’t mind losing so much to such a terrific story from a great author in my favorite magazine.

Looks like we’re not eating Dutch in Windy City! Congrats to BG and John Hocking on scoring the first ever Harper’s Pen!