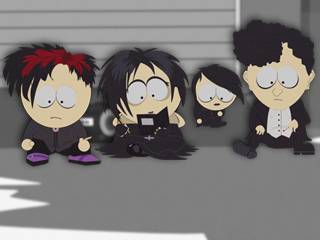 There’s nothing like being faced with your own weirdness.

Last week a home improvement project forced me to pack up my beloved library for the weekend, including that creepy little statue from Raiders of the Lost Ark. Every last book had to be removed, and since I didn’t trust anyone else, I did it myself.

The eye-level shelves contained nostalgic memory joggers such as the complete set of A Series of Unfortunate Events, which represented the first review I ever did for Black Gate, and the hard cover copies of every book Anne Rice ever wrote, each personally signed to me (remember all the lousy weather you stood outside in to get those autographs?).

These two items may seem a bit strange to you, but that’s par for the course around my abode. And when I come across something odd, even for me, that’s saying something.

As I got toward the bottom shelves in the corner near the love seat, just left of the secret door leading down to the dungeon (kidding), I found I had collected a whole shelf of unusual books on the topic of death. And for those of you thinking “That sounds normal for her,” it really isn’t.

Unlike the “Goth Kids” on South Park, I am not, nor have I ever been, death obsessed. One summer working as an orderly at the local hospital cured me of that, believe me. Wheeling several of the real thing down to the morgue while the warmth was still dissipating was enough to put me off. 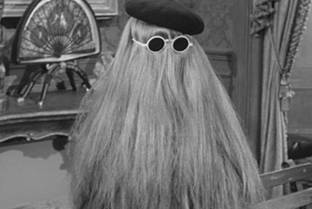 No, I’m more like an Addams Family relative, on the Cousin It side.

So to find a shelf of books I had totally forgotten about on a subject that frankly freaks me out a little, made me question whether I was truly…well…off.

However, never one to miss the opportunity to share something strange and unusual, I decided not to pack up this shelf, and instead hauled of the volumes to my desk to sort through and pick out the tastiest tidbits to share with you. I’ll let you draw your own conclusions.

After the Funeral; The Posthumous Adventures of Famous Corpses

This is not only hysterical for the obvious reasons, but what’s funnier is that all of these stories are true. The chapters are divided up into four sections; Heads, Hearts, Bodies and Miscellaneous, each providing a short story about the real adventure of a famous dead person’s remains.

For instance, in the “Hearts” section we learn how Percy Shelly’s cremated remains did not include his heart. This organ was in fact discovered thirty-three years after his death in 1855, among the effects of his wife Mary Shelly who kept them until she died, wrapped in silk and pressed between the pages of her leather-bound copy of Adonais; a fitting tribute from the much beloved husband to his wife, the famous author of Frankenstein.

In the “Heads” area we learn how Wolfgang Amadeus Mozart’s head (skull actually) was removed from his remains ten years after his death in 1791, by the gravedigger who had buried him. Depending on your point of view, Mozart was fortunate that at least some part of him was salvaged from the cemetery “reorganization;” a periodic removal of less fortunate corpses to make room for those with more money. The head now resides in the Mozart museum in Salzburg, Germany, where I actually got a peek at it a few years back.

You just can’t make this stuff up. 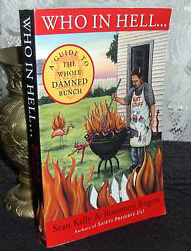 OK, think phone book of everyone in Hell. It’s as simple and as ingenious as that.

The entries are alphabetical listing the person’s name, the date they went to Hell, and the reason they didn’t get a better address. I was actually surprised by some of the people I discovered in Hell, for instance;

I know you’re thinking what I’m thinking; since this book was published in 1996 the population of Hell has gotten a whole lot bigger. Forget the obvious ones like Saddam Hussain, let’s talk about ex-boyfriends, ex-girlfriends, ex-bosses (or current ones for that matter). The possibilities are endless which is why I’m not putting Who In Hell back in the library. It’s staying out on the coffee table as a conversation starter. 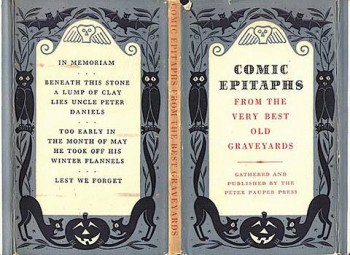 The fine folks at Peter Pauper Press actually gathered these comical items from sources all over the world. They freely admit that as they didn’t personally see every headstone there is doubt about the authenticity of some of the entries, however the majority of them were confirmed by photograph.

As a connoisseur of old cemeteries myself, I can vouch that even your local one will have some entertaining entries.

From a marker in Nantucket for Ezekiel Peaze:

From a marker in Haddington, UK for Mrs. Elizabeth Nott

Nott Born – Nott Dead
Nott Christened
Nott Begot.
Lo here she lies
Who was
And who was Nott

There were a lot of books on this particular shelf but the theme was similar. Clearly, due to some of the notes I found written inside the covers, I picked many of them up at flea markets and consignment shops but I guess the common thread here is humor, albeit the morbid sort. So maybe these books aren’t as out of place in my library as I originally thought.

It reminds me of an old orderly I worked with that summer at the hospital. He periodically put a pair of Risky Business sunglasses over the top of the sheet, and onto the face of the dearly departed underneath, while belting out a few stanzas of Bob Segar. When he’d see the mortified look on my face, he’d nearly kill himself laughing, “Honey, if you can’t find your sense of humor, you might as well crawl up on that gurney with ‘em.”

Weird how true that turned out to be.