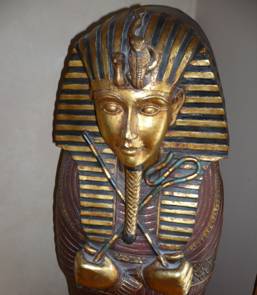 It doesn’t take much psychic ability to figure out a lot about a person just by walking through their front door. We look for subtle indications that our impression outside their abode was either right on or dead wrong. We keep an eye out for hidden aspects of their personality that might reveal themselves in subtle ways. For instance, did you stumble upon a racy mag stacked amongst the Better Homes and Gardens at your boss’ summer BBQ party? BINGO!

However, there are some people whose living arrangements simply scream out a more tangible and obvious message about what’s going on between their ears. As kids, their rooms were wallpapered with visual representations of what they were into, and the moment you walked through the door you realized that YES, this was clearly your friend’s personal space, for better or worse.

But what happens later, when those particularly expressive individuals get jobs and eventually, heaven forbid, expendable income?

I want to preface what I’m about to tell you by saying that by in large, the really creepy stuff is relegated to my office, where I mentioned last week the cleaning lady refuses to go. This is fine with me, considering how fragile the voodoo doll collection is. The arrangement also makes it possible to simply close the door, thereby preserving the delicate sensibilities of some of my guests.

The rest of the house was done up with Mr. Goth Chick’s approval. As most of you gentlemen know, your biggest battle is to keep your surroundings from becoming too “girly” or worse yet, from looking like an advertisement straight out of a yuppie catalog. I can tell you with all due respect, Mr. Goth Chick has a whole different set of concerns.

So let’s take a little tour shall we? 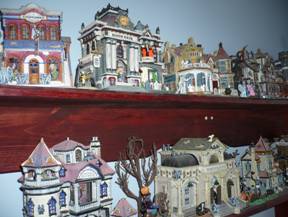 I’ll never forget the first cleaning lady I interviewed, who crossed herself at the threshold of my inner sanctum and declined my business.

The second one fared better, in that she agreed to take the job but would offer to do the windows rather than “that one room.” I thought I got the better end of that deal anyway, but couldn’t help being a wee bit hurt.

The collection of haunted houses is lovingly expanded each year and holds a particularly delicate spot close to my heart. And the Voodoo shelf goes without saying.

If I lost my cleaning lady at the office, I annihilated the relationship with my ultra-conservative, Southern Baptist cousins in the dining room. Prominently displayed is a really nice replica of one of King Tut’s funerary items. In their opinion, only pagan-worshiping heathens kept a coffin in the room where they break bread. For crying out loud it’s a DVD cabinet…lighten up. I obviously kept my office door shut whenever they visit. 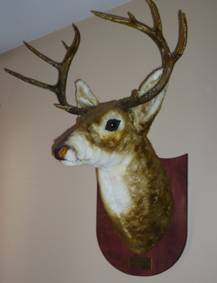 Okay go ahead, make the crack about this being called “the dead room” in my house. It’s not like I haven’t heard it before.

So if you’re done, I’ll point out that this room is pretty normal. I find the deer head on the wall “whimsically charming” (it’s fake) and the absinthe fountain just makes me tragically cool, in a 19th-century sort of way.

Sure there are a couple of tapestries on the wall that might lend to a House on Haunted Hill feel, but that is strictly open to interpretation. 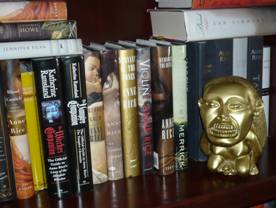 The fact that our house has a library may immediately put it in the “places you don’t want to be in after midnight” category.

But be fair, all the books and the piano laden with sepia-toned pictures of dead relatives must have a home of their own and none of the shelves slide back to reveal stairways to torture chambers, as far as you know. It does sport that grotesque little statue from Raiders of the Lost Ark but he’s just a left over Christmas decoration.

There are a few more fun things to see but you get the idea. I believe the place where we hang our black leather, or whatever, should be the one place in the world where we are free to express ourselves. When you’re invited over to my house you don’t have to bother peeking into bathroom cabinets to uncover personality secrets. I’ve got them all on shelves, highlighted with track lighting.

It is home after all, dark and foreboding though it may be to anyone else.

[…] a home improvement project forced me to pack up my beloved library for the weekend, including that creepy little statue from Raiders of the Lost Ark. Every last book had to be removed, and since I didn’t trust anyone […]