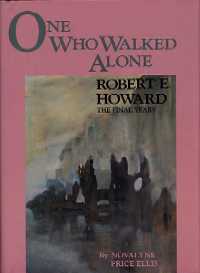 It’s hard to add much about RE Howard to what’s been said here, but I’ll try.

Howard is easy to compliment on his prose style, his ringing battles so evocative that the blood almost sticks to your hands as you turn the pages. His characters were primal archetypes, quick to take to and want more from. His worldbuilding allowed you to smell the exotic spices in the market street air and hear the shadowy footpads in the alleys — his masterwork Hyborea teemed with life and detail. His sense of rhythm in the telling of Conan’s latest exploit or explosive westerns leavened with physical humor prove him a master yarn-spinner.

But there’s more to him than just technique.

I get writing from amateurs every now and then that about lives up to Howard, even if it’s just aping his style. The stories just seem strangely lifeless for all the careful detail, cacophonous action, and pulpish word-choice. I usually tell these writers to “tell me one of your truths.”

Howard put what he knew to be true in his stories. He was an opinionated man, read Novalyne Price Ellis’s memoir One Who Walked Alone for plenty of examples. He knew the power of entropy, he’d seen it growing up in Texas as the oil men came and went. Cross Plains experienced it in the bust of the Great Depression. Howard’s stories are filled with the frailty of civilization, yet even when all that is dross falls away and the hollow gongs go silent there’s still the rough code of someone like Conan to protect a defenseless woman or Solomon Kane’s relentless resolve to avenge a murder even unto the lawless coasts of the New World. The whole world may have fallen or been left behind, but these characters will still see justice prevail.

Howard was a great reader of history and spoke endlessly of corruption. The rotten old order gives way to the new, not always easily, then the new eventually goes sclerotic and itself is preyed on by another generation of barbarians. The same truth applied to Rome applied to Howard’s Aquilonia and fallen Stygia.

Yes, by all means give R.E. Howard his hard-earned props as a technical master. But he also wrote from his brain, his heart, and his guts about what was important about life, as he saw it. Conan’s broadsword spoke many of Howard’s truths.

So very true. Howard is a perfect example of a fantasist who used elements of his real life and experience to infuse his fantasies with genuine humanity. They say writers should “write what you know” and that’s true–even if you’re writing about lands and empires that never were. You still have to write about what you know.

ONE WHO WALKED ALONE was made into a really good movie about Howard back in the mid-90s. It was called “The Whole Wide World,” and Vincent D’Onofrio gave a killer performance as Bob Howard. A quiet little movie that never got as much attention as it deserved. I believe Renee Zellweger played Novaline Price, Howard’s sometime girlfriend. Essential viewing for real REH fans!

[…] a diehard S&S geek, you may not be following the BlackGate blog. So you may not have seen this thoughtful post, part of their birthday celebration for Howard earlier this year. I quote a salient selection: I […]

As I started reading through these old posts, this is exactly what I was looking for. I don’t think I’ve ever read anything that better sums up why I’m a Robert E. Howard fan.