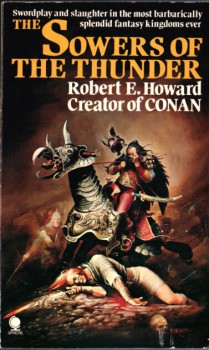 To write something on the occasion of Robert E. Howard’s birthday is a bit, well, intimidating. As imposing a presence as the Texan was in life, his reputation a century on has approached the status of myth. Not only that, but his work is the subject of formidable scholarship of the sort seen over at The Cimmerian and at the Robert E. Howard forums — and I’ll admit that the breadth of knowledge and insight displayed in even the most casual thread or post at either of those sites leaves me in the dust. Then too there are my fellow BGers who plan to post something today, many of whom have a deep and abiding passion for Howard and a long familiarity with his work. But in my case, on the subject of Howard, I’m a rank amateur.

But I’m an enthusiastic amateur, and if I can’t write from a position of deep learning, than I can at least offer my own personal appreciation for his work, which I was a long time in coming to. I met him first through Conan, naturally, a character more famous than his creator. It was as a wee lad sitting in front of the television and watching a behind-the-scenes special on an R-rated movie that I was not yet allowed to watch that I first encountered the iron-thewed Cimmerian . . . and a future governor of California. When I finally did get to see Conan the Barbarian, it immediately became one of my favorite films, cementing nicely with the melange of fantasy loves such as Dragonslayer and the old Robin Hood BBC series,  The Lord of the Rings, The Chronicles of Thomas Covenant, and Dragonlance, and, of course, Dungeons & Dragons. 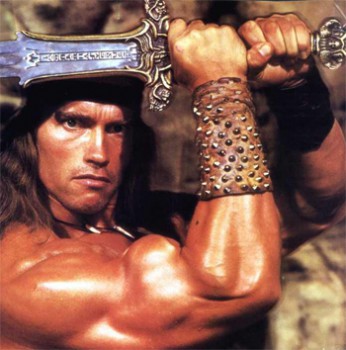 Being interested in reading, I knew Howard was the man behind Conan. What I didn’t know was how to decipher the myriad Conan pastiche books out there. Clearly they were written by multiple authors — but I didn’t want multiple authors, I wanted to see how good the guy was that inspired them all in the first place. And then there was the question of getting the books in order, I had book three from the library, and book eight was on sale in the mall, but how could I get a hold of the first books in the series? In a time when books were harder to come by and more precious to me — both as a factor of my age and of the age I lived in, pre-internet as it was — my fastidious and somewhat rigid reading habits of acquiring and reading an entire series completely and in order ensured I was not to meet Howard on the page until my late twenties.

And when I finally did, it was through his historicals. The Sowers of the Thunder was the first Howard I read, a collection of a few Near Eastern themed shorts named after possibly the best story in the collection. Very interested in Crusader history as I was, it was a perfect choice, replete with not just adventure, but some excellently deft world-building. From Outremer itself in the time of Baibers, to the Siege of Vienna in 1529, the book offered a nice glimpse of Howard’s skill with historical fiction. By the time I was finished, I certainly agreed with the first line of Roy G. Krenkel’s introduction “Howard was a great writer . . .”

I had been lucky to find another book along with Sowers, a collection of his Cormac Mac Art stories (volume one of the ‘Robert E. Howard’ library from Baen). These stories nicely bridged the gap between Howard’s historical fiction and his Sword & Sorcery, and offered everything his more famous tales are known for: headlong pace and muscular prose, eldritch horrors and doughty warriors, fabulous locales, cunning savages, a 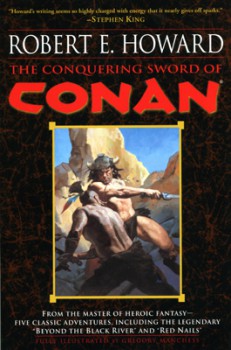 nd an underlying grimness that meant the adventures where never just about adventure. In fact, it was obvious that Howard wasn’t one to be pigeonholed, yes he wrote pulp adventures with strong swordsmen rescuing scantily-glad vixens, but if this mere surface gloss was all there was to Howard we wouldn’t be talking about him today.

I’m glad Del Rey came along with their new Howard collections right around the time I was ready to plunge headlong into his work. And so I encountered Solomon Kane and Kull, Bran Mak Morn and the biggest of them all, Conan — all in stories penned by Howard himself! Two decades had passed since I had first heard of the Cimmerian, and seen him portrayed on the screen. He was a household word, and he was Howard’s most famous creation. With so much build-up, one could easily expect to be disappointed when finally getting down to read. But on the contrary, Conan was everything he was billed to be and more, and Howard’s skill rose in my estimation with each story and book I devoured. That man — that young man, a man younger than I am now — banging away on his typewriter in a little town in Depression-era Texas had a genius for story and words that elevate him above most of his contemporaries, and most of the writers of the past seventy years that have labored in his long shadow.

John Milius’ CONAN THE BARBARIAN movie remains one of the greatest fantasy films in history, despite naysayers who just “don’t get” Howard’s or Milius’ vision. This film stands up to repeated watchings, and it evokes the doom and savagery of the Hyborian Age, as well as its fantastic elements. Ah-nold (who was a relatively unknown at the time) was a perfect choice for Conan.

The only problem was the horrible sequel, which involved an entirely different creative team, and a deliberate effort to remove the “R” rating…it took all the teeth from Howard’s creation and tried to turn it into a Rated PG franchise. Tragic.

CONAN THE BARBARIAN, however, still holds up.

It’s one of my favorite films of all time — and a perfect example of how a film doesn’t have to be slavishly devoted tot he source material to be good (unfortunately, Hollywood tends to err on the other side of the spectrum as the new abomination with the Conan name attached to it will no doubt prove).

As you say, the sequel is shuddersome.