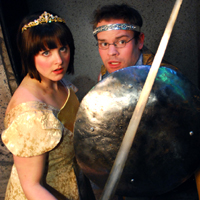 I don’t think I’ve gone to see a children’s play since my youngest brother was in a community church production of Grease. I’ve certainly never attended one with an eye out for analysis.

What would be the point? It’s children’s theatre. It’s so easy to dismiss with contempt, unless you’ve got a sparkly-eyed niece accompanying you, all gung-ho to see sword-fighting Princesses and golden Dragon puppets singing and dancing – which I didn’t. I had to guard against any immediately snarky but-I-studied-acting-in-college reactions.

See, I’ve got this new gig reviewing shows. This means free theatre. I love theatre. I love it. And I’m not the kind of girl who can afford this particular jones regularly – only when very special friends are in very special productions. So – free ticket? The word “Dragons” in the title? And, oh, hey – fantasy! I write this stuff! I read this stuff. I’m totally game.

The play was Last of the Dragons, based on a book by E. Nesbit. Edith Nesbit, she of The Enchanted Castle fame! Edith Nesbit, one of the cuddly outlaw grandmas of fantasy. Yes, World! Take your Tolkiens, your Lewis Carrols, your Lord Dunsanys! I, in turn, will take my E. Nesbits, my Joan Aikens, and even, occasionally, my Francis Hodgson Burnetts (who doesn’t have much to do with dragons, per se, but who’s really big on Magic with a capital M). 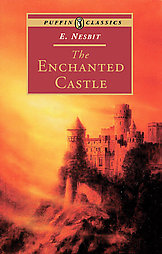 Lifeline Theatre’s promo material describes Last of the Dragons thus: “In the land of Astoria, tradition demands that every princess be given to a fire-breathing dragon so she can be saved by a handsome prince. But Andromeda, the swashbuckling daughter of the current king, doesn’t want to be rescued by a boy. And Prince Stanley of Tuscany is more interested in science than feats of derring-do…”

Okay, so immediately, you gotta like that the Princess is named Andromeda (shortened, cutely – of course – to “Andie”). “Andromeda” harkens back to sacrificial princesses and big sea monsters and dashing demi-gods (and for me, personally, the hours I spent in the swimming pool as a child pretending I was chained to the underside of our diving board, waiting for the Kraken to swim up out of the deep and take me down to where sacrificial princesses usually go for lack of a hero on Pegasus-back), making it all the more fun when Andie leaps onto the stage in a black bandit mask and challenges her father – the King – to a duel before breakfast.

There’s a lot to like about this story-dressed-up-as-a-play. I like girls with swords. (I especially like when they sing.) I like shy, nerdy princes who have the endearing habit of rubbing their noses when nervous, who prefer math books and inventing machines to destroying creatures that never caused them harm. I like talking birds. The bird, in this case, was a lurid green parrot named D’Artagnan played by my pal David Fink. What I found so interesting about D’Artagnan was that he’d learned his vocabulary not out of a salty sea captain’s mouth, but from the dictionary pages with which the King had lined D’Artagnan’s cage. He kept squawking out polysyllabic word-bombs, immediately thereafter defining them for his young audience – like the narrator in a Lemony Snickett novel. Which made me think: Which came first, the Snickett or the Nesbit? The answer is obvious.

Of course, before I accuse Snickett of stealing Nesbit’s habit of sneak-attack vocabulary lessons, I should probably read the original text of Last of the Dragons. Who knows? This little tick of D’Artagnan’s could belong solely to the adaptation – post-Series of Unfortunate Events. Still, I found it funny. And, after all, as Gene Wolfe has said repeatedly, “Small writers borrow. Great writers steal.”

Let’s talk about the dragon. It’s hard not to get a thrill when you know you’ll be meeting the “last” of something. The Last Samurai, The Last Unicorn, The Last Crusade. Something epic is about to occur. 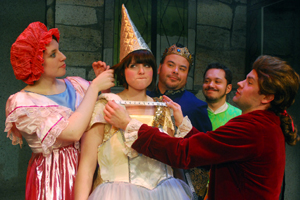 The Last Dragon of Lifeline Theatre’s production is a creature of gold and pearl and silver and flame. It is a vast, sparkling head with a voice like thunder. It has two gigantic gold-tipped claws (operated by two actor’s backstage who aren’t under the head itself) that reach from the wings to parry a whirl of sword thrusts of whichever character happens to be thrusting his or her sword at the moment. The dragon is lovely and lonely and dignified. It doesn’t like people, but it also wants to be called, “Dragon, dear,” in tones of tenderness and affection. You feel you have more in common with the dragon than with the feisty princess or the awkward prince. You hope, a little, that the dragon’ll at least get a square meal out of its attackers before it goes extinct in the manner of all “last” things.

But this is children’s theatre, and an E. Nesbit tale besides, and the last dragon ends up weeping all over the prince and princess and inviting them in for tea. The prince and princess agree to the tea, and also agree to marry each other. The King and Queen (of Astoria and Tuscany respectively) come to their senses and stop trying to push everyone around. The dragon ends up as a glorified school bus, ferrying happy children to the seaside and back home before dinner. Happily ever afters all around!

All right. In conclusion: even with the best intentions, I often found myself hiding my face in my scarf and snickering from time to time. I heard double entendres where none were meant, and realized just how sordid perfectly normal children’s theatre faerie tale tropes can seem. I mean, what’s with the King tying his daughter the Princess to a stone, then standing around and beseeching her to forget the whole dragon-slaying-marriage idea – even though he bullied her into it in the first place? Instead, he sings, she should just come back to live in daddy’s castle where she’ll be safe all her life. Whoa. And she’s all, “No, daddy darling, you’d better tie me up because I want to be free!” Um?

I suppose these lines from Last of the Dragons sum it all up for me:

It’s definitely more comfortable to leave the stuff of fantasy confined to a page. Less disappointing. Less out of tune. But there’s also something very fine in watching a story come to life, put on flesh and spring out of the dark, sword in hand, flashing its flaws, glittering its awesome golden puppet claws, and singing at you.

I’m not saying jump out of your seats and book a flight to Chicago to come see this play. But you might want to check out what’s going on in your local theatre scene. (Who knows? You, too, could have dragon puppets for a Sunday matinee!) You might also consider buying E. Nesbit’s book and giving her the old canon try. And if you’re in the greater Chicagoland area, and if you have young kids in or around your life, you could do worse than pile all interested parties into the minivan and drive out to Roger’s Park for some live theatre. As far as I could tell, every kid in the audience was at the edge of his or her seat, completely digging the stuff on stage. 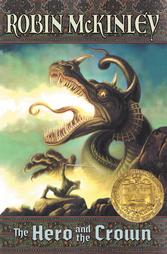 What a great way to introduce non-readers to Nesbit. How gently you could convince your Barbie-brained girl (not that there’s anything wrong with that; I used to play with Barbies myself. Lots.) that swordplay is fair game – and assure your sensitive boy-child that problem-solving nerds with telescopes are way cool too – and to let the younger generation realize just how dragons are the best part of… well, everything! Tell them – the dragons will only get better. Just wait ‘til they meet Robin McKinley’s Maur from Hero and the Crown. Not to mention Smaug. Hot diggity!

When I left the theatre, I had a stronger urge to cuss than usual – but that’s children’s theatre for you. What you can bet on is that I’ll be back at the end of April, when Lifeline Theatre will be doing an adaptation of Neil Gaiman’s Neverwhere. (Don’t worry – it’s not a musical. And it’s not a part of their children’s season.)

Because some things you just gotta see. Because, as Gaiman wrote in Fragile Things, “We owe it to each other to tell stories.” And there are many, many ways to tell a story. Theatre’s an old art, but it houses new worlds quite comfortably. And oh, what worlds await us.

Great review. One part that jumped up and bit me was

There’s a great anthology title–and maybe a reality TV series (although I hope not).

I’m not sure I ever read anything by Nesbit, Aiken or Burnett. That looks like a serious mistake I’ll have to correct.

Aiken has some GREAT short story collections. And her novel, Castle Barebane, which I read last year, was pretty chilling. My best friend read some of Enchanted Castle to me one time on a road trip, but that was years ago.

I grew up with Burnett, of course.

[…] first contribution to the BG blog was her review of Last of the Dragons in January, 2010. Since then her posts have been among the most popular features we’ve […]