Heroscape Master Set 3: Dungeons and Dragons Battle for the Underdark
Wizards of the Coast ($21.99, Jan 2010)
Reviewed by Howard Andrew Jones

Here at the Jones household we have the new Heroscape Master Set 3. Judging by the amount of Heroscape I’ve been playing with the kids, the game may have us.

The new master set is smaller than either of the first two, although its 50 interlocking terrain pieces can simulate a variety of battlefields — and can add in to any existing terrain sets a Heroscape gamer already owns. If you’re a relative newcomer to the concept of Heroscape, like I was until just recently, it’s a do-it-yourself game board of surprisingly sturdy interlocking hexagonal tiles. Some of the tiles are part of larger platforms, and some are merely a hexagon. Different colors suggest grass, or rock, or sand, or swamp — or even swamp water or regular water. They can be combined in an almost endless array of patterns, limited only by imagination and the amount of tiles.

The D and D expansion set is subtitled “Battle for the Underdark” and so features new pieces meant to better simulate dungeon delving. There are shadow hex tiles, stalagmites, and gray cavern tiles. 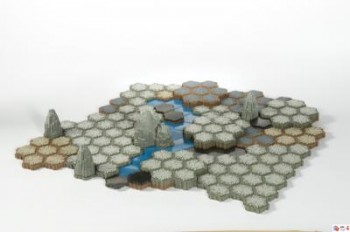 A battlegame like this isn’t much good without miniatures and rules. While the Heroscape rules haven’t changed from the original master sets, they’re presented in a new booklet with glossy, slick magazine like paper. At first glance, Heroscape rules look intimidating — there are almost two dozen pages of rules. The thickness of that rule book stems from the fact that every rule is well-detailed not only with clear explanatory text, but with example photographs. Once I sat down to try Heroscape with my playtesters — as I describe in issue 14 of Black Gate — all of us, from 9 to 43, found the rules intuitive enough that we rarely have to reference the booklet. 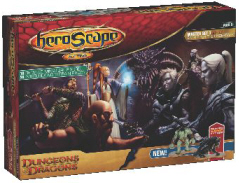 As with other master sets, Battle for the Underdark includes several sample battlefields, which are layer by layer building plans for the various tiles, complete with tactical objectives for player armies. This new set comes with four battle scenarios, and they’re interlinked into a campaign of smaller battles with heroic characters facing off against adversaries of the realms beneath the earth that one often finds in Dungeons and Dragons. My young playtesters were disappointed with the scenarios because they wanted to bring their own armies to play rather than using the suggested figurines, but I thought the designers did an excellent job of emulating the feel of D&D, with its emphasis on a handful of heroes. These new battlefields really did have a different feel due to their varied objectives, as well as a shorter run time. It’s not that I mind the longer run times of epic Heroscape battles, it’s just nice to know you can run an enjoyable game in under an hour.

I can’t discuss any new Heroscape set without the pieces. To play Heroscape you “buy” armies of figures, each which comes with a card detailing a number of factors: life points, special attacks, attack and defense value, point value, etcetera. If each player has to buy a 400 point army, then each player selects figures from the available cards that add up to 400, which explains in part why Heroscape is so damned addictive. Figurines in certain sets or expansions may be more appealing to different people, and the figures, alas, go out of print. (Take me, for example. I have haunted ebay for the ancient Greeks and Shaolin Monks for months now, but have had no luck.) 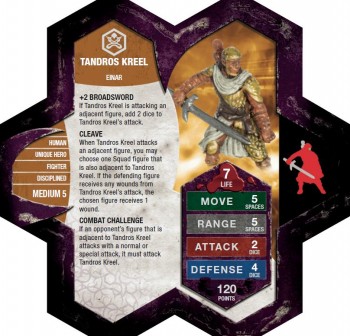 Master set 3 comes with two monstrous figures, a black dragon and a troll, a squad of drow, a drow wizard, and four heroes: A swordsman, an elven wizard, a cleric, and a dwarven thief. Each is surprisingly well detailed. Both the troll and the black dragon are appropriately hideous. The troll regenerates a point of damage every turn, similar to its paper and pencil counterpart, so its defense of 1 isn’t as detrimental as it may first seem. The black dragon Othkurik proved the most popular of all the game pieces, and has been used in multiple scenarios by a variety of our playtesters. He has similar statistics to Mimring, the dragon that comes in master set 1 (technically, Mimring uses fire and Othkurik uses acid, but the destructive effect is the same) save that his breath attack doesn’t go as far, he’s smaller, and he’s ten points cheaper. He also gets an ambush bonus anytime he’s lurking in a swamp water or shadow hex. Popular as he proved to be, he’s the only real quibble any of us had with the new set. OthKurik’s head is twisted hard right and it’s difficult to position him to determine line of sight attacks.

We enjoyed all the human-sized characters, including those drow (dark-skinned evil underground elves) with their poisoned weapons and their evil wizard, but I think the two favorites were the swordsman, Tandros Kreel, and the dwarven thief, Darrak Ambershard. Kreel’s expensive but very deadly in play, especially when backed up by a healer, who can restore life points. Ambershard is deadly when sent against an opponent who’s already engaged, and at only 60 points is a bargain piece.

My final word? A well-made product that’s even more enjoyable than it sounds. It’s fun for the whole family… if your family likes brave heroes and monstrous beasts as much as mine does.

I received a copy of the introductory Heroscape set in the mail some time ago. My kids promptly tore it open and used it to create moveable dioramas with their D&D miniatures and Mage Knight figs. I thought it was worth the price then, and we never even glanced at the rule book. 🙂

You sent me scurrying to Amazon and eBay looking for this elusive Ancient Greeks set, but I can’t find reference to it anywhere. Closest I could come up with was the Greeks & Vipers set of Wave 4 (which Amazon still has available for $24.99).

If you want a great source of information, alternate rules, maps, and more fan based content than you would think possible, check out heroscapers.com.

There are also links on the main page to online retailers that carry Heroscape products.

I’ve been playing/collecting Heroscape for quite a few years. Unfortunatly I don’t get to play much, but I’ll set up maps and play a game or two with my kids, or let them just use it as a playset. Its interesting to see Heroscape figures go up against plastic army men, Transformers, and G.I. Joe.