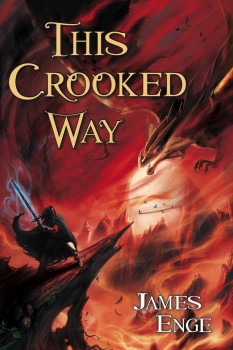 Last night I finished This Crooked Way, by James Enge.

I was on the train, halfway home. There is very little more irritating than finishing a book when you’re just halfway to your destination. Luckily, I had George R.R. Martin’s Fevre Dream in my backpack, the first two chapters of which were quite good, so I didn’t suffer long. And anyway, good as it was, I kept being drawn back to thoughts of This Crooked Way, connecting dots, remembering the heights, the depths, the scaffolding of each story, and how it made me laugh – out loud – so often that I surprised myself.

There are some books that make me read them aloud – mostly their dialogue, but also certain killer phrases or descriptions. It’s my actor’s training, I suppose. Plays are not meant to be read on the page; you have to voice them lest they lose vibrancy and dimension. Some books, my favorite kind of books, leap into my throat and start declaiming themselves. And it doesn’t matter if I’m on a public train, or tromping to work in the snow with my fingers freezing, because I’ve left off my gloves, because it’s hard to turn pages with gloves on – none of that matters, because the words are just that important.

It astonished me how much of this book I’d already read. Several of its chapters had already appeared in Black Gate, where I first discovered Enge. His stories were always among my favorites, give or take a Martha Wells (depending on my mood), although, typical of my obliviousness, it took a few issues before I started recognizing Morlock Ambrosius as a continuing character, and even longer before I started paying attention to the name of his author.

Finally all the parts sank in — at which point I was entrenched in unintentional fandom. The last time this happened was with Ysabeau Wilce’s “Califa” stories, which I first discovered in The Magazine of Fantasy and Science Fiction. That was such an aberration, I never expected it to occur again.

Back at this last year’s WisCon, I saw the ARC of Enge’s first novel, Blood of Ambrose on sale for a dollar at a charitable donation table. I pounced. I read. I wrote about it here.

So you can understand my considerable excitement when This Crooked Way came out. Unlike Blood of Ambrose, which is (and here I’ll quote Enge’s Appendices, so that I may sound more intelligent than reality dictates) “in the form of a Bildungsroman or ‘education of a hero,'” This Crooked Way is an episodic novel, or as they liked to call it at Columbia College Chicago, my alma mater, “a novel in stories.”

Don’t get me wrong, I’d follow Morlock anywhere, but I definitely had to readjust my mood every time a chapter hit me with a new Point of View. All the interludes among the Khroi made me twitch a bit, until I forced myself to settle down and admit that the whole three-mouth, palp-clusters thing was kind of cool.

And then, just when I thought the through-thread of the stories would be the hunt for the horse Velox, we lost Velox. Nobody mentioned him. He ceased to be important. And we didn’t find him again until… much, much, much later.

However. Setting Velox aside and taking each chapter individually – as separate stories – this book was very pleasing, beautiful, painful, and painfully funny.

Here I will give you all my favorite part of the book entire. From the chapter “Payment in Full”:

“The bean burst like a hatching egg, and out of it crawled a vine with broad greenish black leaves. It crawled straight up the side of the moat and the wall above it.

‘Wow!’ said Thend. ‘That’ll be handy in the mountains.’

Morlock looked rueful. ‘I’m afraid it’s my last one. I had four, but I traded three of them to this boy for his cow.’

Chapter Six, entitled “An Old Lady and A Lake,” has an actual live bridge troll. That bridge troll had me in stitches. No, I cannot sum up the reasons why. Once again (and for the last time here), I’ll have to quote.

This is a passage from the second time Morlock has to trick the troll into letting him across the bridge.

“When he stepped onto the bridge, the troll climbed out of the water and drew itself up onto the walkway. The majority of its eyes looked doubtfully at Morlock and it said, ‘You don’t seem to be twice your previous size. What was that? Hyperbole? I dislike rhetorical tropes that verge on dishonesty.’

‘Unfortunately, there are no walnuts or acorns in the woods. It’s spring and they won’t be ripe until autumn.’

‘I expect my mother will give me a good breakfast. Mothers are famous for that.’

‘I wouldn’t know,’ the troll replied. ‘We reproduce by fission.’

‘I’d heard. You must be pretty close to splitting, to judge by the number of extrusions from your central body.’

In that same “An Old Lady and A Lake,” we have, to contrast the bridge troll, some passages of startling sadness, masquerading as banter.

To me, Nimue Viviana’s forgetfulness, and the awful (though occasionally hilarious) nature of her deaths, though magical in context, set up echoes that go down deep. There are bleak truths here: the fear of growing old, of growing forgetful (through, for example, dementia or Alzheimer’s, which exhibit a few of the same symptoms Nimue Viviana displays, sans maggots), of having to die gracelessly — or worse, being let to live on, even more gracelessly.

Perhaps this, then, was the true through-thread of Enge’s novel: an examination of mortality and the cost of extending it artificially. Only, Enge includes bridge trolls in this discussion. Which is cool.

The bridge troll was totally my favorite bad guy until I met the gnome at the end.

But I cannot tell you anything about N——– and spoil it for you. Just so you know, I’ve never met a villain so vain, so disgusting and so dang funny in all my reading life. Quite gross. Gorge rising. Enough of him. I’ll go back and reread him later.

The greatest part of my Enge-enjoyment stems, not from his crooked hero on his crooked path, as he wends through crooked mountains and builds crooked houses (although I do adore Morlock Ambrosius and all his crooked ways), but from his companions, especially the females. There are no token love interests. There are no weak women. Or, rather, if there are weak women, there are also shifty men, sniveling boys, idiot trolls and vulnerable golems. So much of my beef with high fantasy is the dearth of awesome female characters, and Enge is very generous with them. They have wit, strength, filed teeth, lightning eyes, strong hands, spunk. So do the guys. Who don’t have one filed tooth between them.

In this book, the monsters are satisfyingly juicy and crunchable. The villains are terrifying – hardly less so when they’re desperate and likable than when they’re cackling and self-assured. The heroes are… wonderful. They bleed on everything. And Morlock’s main nemesis (why spoil it?) is utterly charming and wholly horrible and occasionally sympathetic. Egad, I liked this book.

What troubled me was the Latin and anachronisms like the use of “Christ,” as an expletive, when you’re reading about a fantastical world with three moons and dragons that is obviously not Earth. In a science fiction novel, this would not have stymied me so.

My trouble with this niggled at me until I dreamed I asked the author, “What the heck is all THAT about?” In my dream, Enge sent me on a quest to a rundown neighborhood full of dire faerie tale creatures, including a badass Little Red Riding Hood warrior chick. When I woke, I went straight to my copy of The Crooked Way and read the final Appendix, which I’d been avoiding. I don’t like Appendices usually. I don’t watch Special Features on DVDs either. I’d LIKE to like these things, but usually I regard them as onerous, a chore.

Still, I stood in my cold kitchen this morning and read “Appendix B, Sources and Backgrounds for Ambrosian Legend,” and by the time I reached the end I was grinning. So maybe the mysteries that bothered me weren’t exactly SOLVED by the application of an appendix. But I found my answer in the Sea of Worlds.

Tonight I will sleep trouble-free.

Here I will give you all my favorite part of the book entire.

This novel is next on my list, so I’ve only read the BG chapters, and perhaps one or two others. But I think the bean scene is completely eclipsed by the serpent in the pit. For my money, that’s the finest example of dragonkind ever to grace a page. (And it sounds like the troll will be equally as fun.)

[…] to more ambitious goals, producing the first two Morlock novels Blood of Ambrose (2009) and This Crooked Way (also 2009 – it makes other writers look bad, doesn’t it?), both published by […]

[…] know, I wrote about Blood of Ambrose, and I wrote about This Crooked Way, but this time I’m really stymied. I’m sitting here on my bed, laptop on my knees, feeling […]