Well, here we are in Web 2.0 (whatever that exactly means), print magazines are supposedly dying (even as they are being resuscitated, c.f., Realms of Fantasy) and people still aren’t quite sure how to make the on-line magazine model work.  One problem is that, if you’re like me, you don’t like reading stories on a screen.  You like to lay down on your favorite couch and turn pages.  Of course, if you’re like my daughter, it’s not an issue — when she asks me if I’ve read an article that was in The New York Times, I know without asking that she’s referring to an on-line article. 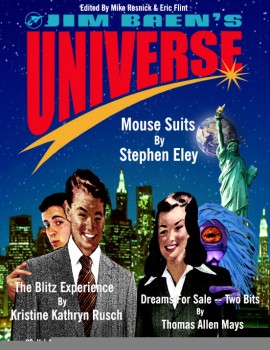 So, here’s the bad news/goods news.  First the bad news. A little while ago, Jim Baen’s Universe announced that after four years it was closing down. The short explanation was, not a surprise given the “information is free” mentality of the Internet, subscriptions couldn’t sustain a magazine that sought to maintain professional print standards (i.e., actually paying authors competitive rates for their work).  Everyone, including The New York Times is trying to figure this one out, and one approach has been to not pay writers. Not surprisingly, frequently you get what you pay for.

As for the good news, Strange Horizons, which has had great success with a sort of public radio/tv fund drive donation model, has exceeded its 2009 Fund Drive goals way ahead of schedule (though you can still contribute, by the way).

Strange Horizons is probably one of the longer lasting, and reputable in terms of quality and “name” authors, that you’re going to find on the Web. It pays professional rates for fiction; it also pays for articles and reviews. The staff, however, is all-volunteer.

So why has Strange Horizons managed to do so well where others have failed? Content, presumably has a lot to do with it. Also, being one of the early exclusively on-line magazines with professional standards may also have helped establish brand recognition. However, Jim Baen’s Universe wasn’t exactly devoid of name recognition. It did, however, retain a print mentality of bi-monthly publication (though, of course, you could access the archives), while Strange Horizons has new content every week. I guess it’s an axiom of web publishing that you continually to have to refresh your content to keep getting “eyeballs, but is that the crux of the matter?

To be fair, Baen’s was paying even better rates than Strange in at least some cases. They were also paying for art (and quite a bit of it at pro rates.)

I think one of the problems was distribution and word of mouth. Strange has been around for a long time and probably built up the audience over time. When I used to talk about Baen’s on forums–no one even knew there was a magazine. Apparently distribution was a bit limited by Baen’s original agreement with Simon and Schuster (they distribute Baen’s books) also.

It’s never a simple formula that is for sure. I enjoyed the magazine and am sorry to see it going by the wayside. I generally only buy shorts/magazines here and there rather than subscribe (for various reasons) but in the last two years…I have only bought or read online/PDF magazines.

I have purchased print anthologies though, but I’d probably buy those online too if offered.

[…] reporting the demise of Jim Baen’s Universe, I started wondering about the habit in genre fiction to use a famous author as a brand or a […]

[…] reporting the demise of Jim Baen’s Universe, I started wondering about the habit in genre fiction to use a famous author as a brand or a […]