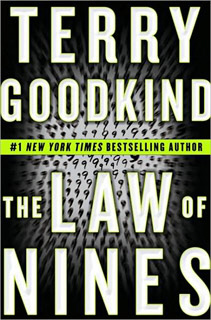 In reporting the demise of Jim Baen’s Universe, I started wondering about the habit in genre fiction to use a famous author as a brand or a subgenre. There’s a line of “Ray Bradbury Presents” paperbacks, and then, of course, there’s Asimov’s and Alfred Hitchcock magazines. This doesn’t happen in mainstream fiction. As far as I know, there’s no Hemingway’s or “Shakespeare Presents” or T. C. Boyle Digest.

And what’s with this “nines” thing? In addition to those nines I’ve already mentioned, along comes The Law of Nines from Terry Goodkind.

I guess the sequels will be called “18.”