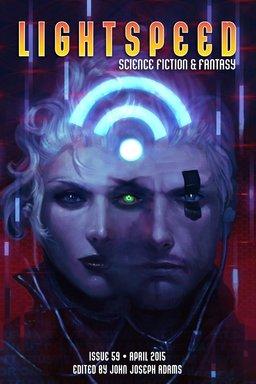 We kicked off our coverage of John Joseph Adams’ excellent online magazine Lightspeed last month with #58, the March 2015 issue.

Lightspeed publishes fantasy and SF, both new fiction and reprints. Among other stories, the April issue contains a reprint from Ken Liu, author of the breakout fantasy novel The Grace of Kings, just released this month. Now’s your chance to get a taste of his short fiction, and see what all the fuss is about. Here’s the first two paragraphs of “The Ussuri Bear”:

By the time we arrived in the Manchu settlement of Tanbian, the Russian expedition had already left a day earlier.

For the last five days, we have been moving through deep snow and dense primeval forest in the Changbai Mountains, trying to catch up. The superiority of the mechanical horse is becoming clearer with each passing minute.

There’s also a free excerpt from The Grace of Kings in the ebook version.

Here’s the complete fiction contents of the April issue.

“The Universe, Sung in Stars” by Kat Howard
“Quiet Town” by Jason Gurley
“The Invisible Hand Rolls the Dice” by Carolyn Ives Gilman (from Interzone 172, October 2001)
“The Birds and the Bees and the Gasoline Trees” by John Barnes (from Engineering Infinity, December 2010) — available April 28

Readers of the eBook version also get Kate Elliott’s novella “On the Dying Winds of the Old Year and the Birthing Winds of the New” (which first appeared in The Very Best of Kate Elliott, published in February by Tachyon Publications) and three novel excerpts: The Rebirths of Tao by Wesley Chu, The Grace of Kings by Ken Liu, and a sponsored excerpt from Acheron Books, Lieutenant Arkham: Elves and Bullets by Alessio Lanterna (translated by Kate Mitchell).

The non-fiction includes a feature interview with Chris Williams, the co-director of Disney’s hit Big Hero 6, book reviews, an interview with cover artist Elena Bespalova, and interviews with all the authors.

In his editorial, John Joseph Adams notes that this month the magazine is sponsored by Acheron Books, the first publishing house to produce Italian fantasy, science fiction and horror fiction and distribute it worldwide in the English language in ebook format. I think this is kind of a cool idea… partnering with publishing houses to simultaneously promote quality books and fund a great magazine. I hope it continues.

“We’ll Be Together Forever” is an appealingly weird read about a couple in a failing relationship who drink a love potion and become consumed with desire for each other — and each other’s possessions.

I liked it a lot. If you read it, I’d be curious to hear whether you wanted a bigger finish.

Thanks rcade! “Appealingly weird” is a fine endorsement in my book. 🙂