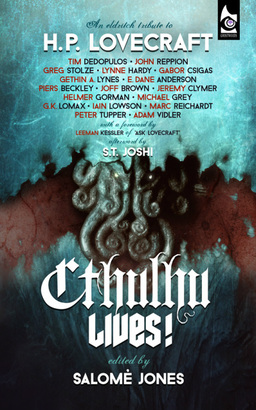 I asked Leeman Kessler, the man behind Ask Lovecraft, to write a foreword because a few months earlier, Tim sent a question to Ask Lovecraft, and Leeman answered it on the show. That was how I learned about it. Leeman was happy to oblige, and has been hugely helpful in getting the word out about the book.

How, you may wonder, did I get S. T. Joshi to write an afterword? I still wonder that myself, really. It turns out he’s a lovely man and he was amenable to writing for us so long as he felt the book was good enough. But I have Gábor Csigás, our art director, to thank for gently insisting that I ask S. T. I mostly did it so Gábor would stop bugging me. I had no idea it would actually work.

One thing I’ve learned about short stories is that different readers will have different favorites. The book was aimed at those who like Lovecraftian weird fiction, but I also hoped that non-Lovecraft fans might like it. Most of the stories have been mentioned by various readers as their favorites. Some stories have been both often mentioned as the best in the book and maligned as terribly written. Explain that to the folks back home!

We’re accepting submissions for another Lovecraftian anthology now. Its working title is Cthulhu Lies Dreaming. You can find the call here. It’s a learning process. I hope the second book will be better than the first.

We hope it will be out later this year. Cthulhu willing.

Thanks for inviting me to write for Black Gate, John. I’d be happy to answer any questions about the book or about what we’re looking for for Cthulhu Lies Dreaming.

Thank you for providing us with a guest post, Salome — especially on such short notice!

Please keep us posted the progress towards CTHULHU LIES DREAMING. I’d love to post the cover here as soon as it’s available.

I think we can make that happen, John. I’ll let you know.