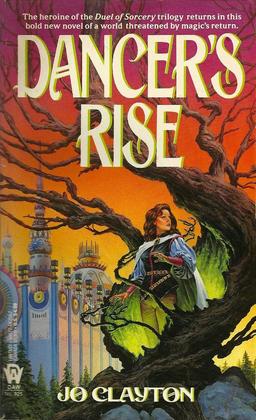 Jo Clayton was an amazingly prolific American fantasy writer. Her first novel, Diadem from the Stars, was published by DAW in 1977. Over the next 20 years, she published no less than 35 fantasy novels, and nearly as many short stories.

In 1996, at the age of 57, she was diagnosed with cancer of the bone marrow; while in the hospital she completed the second novel in the Drums of Chaos trilogy, and most of the final book, Drum Into Silence. It was eventually completed by Kevin Andrew Murphy and published in 2002 by Tor. Jo Clayton passed away on February 13, 1998.

Sixteen years after her death, every single one of her 35 books is out of print — fairly typical for a midlist fantasy author, sad to say — and none are currently available in a digital edition. I found a copy of Dancer’s Rise, the sequel to the Duel of Sorcery trilogy and the first book in the Dancer series, in a collection I acquired a few months ago.

I’ve never read a Jo Clayton novel, and in fact we’ve never covered any of her books here at Black Gate, a pretty serious oversight on both counts. I decided it was time to correct that deficiency.

There’s some confusion surrounding the cover of Dancer’s Rise. It is credited to Jody A. Lee in the book and the ISFDB lists Lee at the verified artist. But that sure looks to me like Richard Hescox’s signature in the bottom right (click the image at right for a bigger version), and Hescox currently has the painting for sale for $6,000.

Serroi — first a warrior woman, later a pawn of the most evil wizard her people had ever known, and finally a powerful worker of earth magic. For centuries spell-imprisoned, Serroi has at last escaped her bonds to find herself in a changed land, a place of scattered city-states which have slowly been acquiring artifacts of technology. And with Serroi’s return, magic, long-vanquished and vanished, seems at last to be reappearing.

Seeking a role in this strange new world, Serroi, along with three valiant companions, has taken on the task of delivering a newly created device to the leader of a distant city-state. But as she sets out on her mission, the very land and all its people seem to turn against her. Even her dreams are haunted by images of an eerie phantasm of death. Yet it is not until she arrives at her final destination that Serroi begins to discover the true nature of the enemy she faces, an enemy able to seize control of the minds and souls of others, an enemy determined to claim Serroi for its own…

Dancer’s Rise was published by DAW Books in 1993. It is 366 pages, priced at $4.99. It has never been reprinted and there is no digital edition. If I had to guess at the cover artist, I would say it looks like Richard Hescox.

Back in the day she was one of those names I just always saw on the shelf without ever actually picking up any of her stuff — then, at some point (maybe based on a Dragon review?) I grabbed one of her series and ended up reading most of her then-catalog in the space of a couple of months.

Yes, sadly it’s a fairly typical fate for a midlister from the 80s & 90s — I wonder if those books even exist in a form that could be easily eBooked at this point.

Glad to hear you enjoyed her work, Joe. She seems to have been neglected by the mainsteam press since her death. If I can find someone more knowledgeable than I, I’ll get a retrospective of her work up at Black Gate.