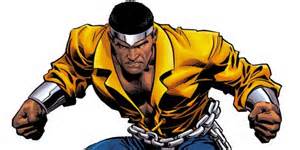 I’ve been following the news surrounding Marvel Entertainment’s upcoming Netflix shows with a great deal of interest. Originally announced last November, the plan is for Netflix to launch four live-action dramas focused on Marvel’s street-level heroes, leading to “a mini-series programming event” that will rival the blockbuster Avengers. Quoting from the press release:

Led by a series focused on Daredevil, followed by Jessica Jones, Iron Fist and Luke Cage, the epic will unfold over multiple years of original programming, taking Netflix members deep into the gritty world of heroes and villains of Hell’s Kitchen, New York. Netflix has committed to a minimum of four, thirteen episodes series and a culminating Marvel’s The Defenders mini-series event that reimagines a dream team of self-sacrificing, heroic characters.

Like many Marvel fans, I’ve been very intrigued by the possibilities of a gritty, realistic TV series focused on some of the most popular characters in the Marvel canon. A big reason for all the excitement is the collaboration of Marvel and Netflix; the latter has a stellar rep based on the ground-breaking House of Cards, starring Kevin Spacey. Daredevil is already underway, with episodes set to premiere in May 2015. It will be followed by Jessica Jones, which stars Krysten Ritter (Veronica Mars, Breaking Bad) as a retired superhero with post-traumatic stress disorder working as a private detective in New York. Jones was created by Brian Michael Bendis and Michael Gaydos for the excellent (and underrated) comic Alias (2001-2004), the flagship title in Marvel’s adult MAX imprint.

A recurring character in Alias was Jones’s boyfriend — none other than Luke Cage, one of the most famous superheroes of the 70s and 80s. Cage first appeared in Marvel’s Hero For Hire #1 in June 1972, and it’s believed he’ll guest-star first in Jessica Jones before spinning off into his own series. Yesterday Marvel announced that Cage would be played by Mike Colter, who’s currently playing a drug kingpin on The Good Wife.

There’s been lots for superhero fans to talk about in the last few weeks. Our latest Marvel news was the announcement that Benedict Cumberbatch was confirmed to play Doctor Strange.

I hope he does well, but I can’t help feeling disappointed that my dream casting of Michael Jai White as Cage and Scott Adkins as Iron Fist, teaming in a glorious modern-day kung fu/blaxploitation series, won’t be happening.

Awesome, awesome, awesome news all around! I loved Luke Cage in my 70s-80s growing up, even have 20 or so of those early issues still. Can’t wait to see him live!

I still find myself occasionally reeling a little with giddy wonderment that the whole interactivity of the Marvel universe is now being tapped, not only in the films, but across other platforms on television (Agents of Shield; the new Netflix mini-series).

The interaction of all these different characters existing in the same world was something Marvel fans have enjoyed and reveled in since the ’60s. Throughout my life, whenever a new Marvel or DC-based superhero franchise was launched, I always thought what many others did: “Too bad it will just be Superhero A plus a couple supporting characters and core villains from his own comic, in a world where no other heroes and villains exist.” Part of what makes the Marvel Universe so gosh-darned fun is not just the — often great — individual story arcs, but the universe (or multiverse) itself: a crazy world that ranges from gods and Eternals and cosmic champions all the way down to rough-and-gritty street fighters like Daredevil — and that sometimes these different layers cross paths.

That Marvel now has the funding (thanks to being owned by Disney), the technology, and the platforms to make that a visual, creative, and legal reality, the TV shows and movies really seem to be doing what we thought they never would: fully realizing what used to appear only in four-color panels and in our imaginations. It’s a really fun ride — and now the uninitiated can appreciate what we always loved about those comics.

I did too. Something about Cage being the only hero you could find in the phone book meant he got involved in a lot more down-to-earth adventures. Plus, he worked for coin, like a good S&S hero should. He was the most sword-and-sorcery hero in Marvel’s canon (aside from Conan, obviously.)

> That Marvel now has the funding (thanks to being owned by Disney), the technology, and the platforms to make that a visual,
> creative, and legal reality, the TV shows and movies really seem to be doing what we thought they never would: fully realizing
> what used to appear only in four-color panels and in our imaginations.

Well said! Marvel has also kept up an amazing run of quality productions, constantly confounding expectations (just look at GUARDIANS OF THE GALAXY this year), and that’s given them an enviable rep.

Marrying Marvel’s sweeping vision with Netflix’s cachet for riveting, realistic drama has resulted in sky-high expectations. I’m not sure how Marvel will meet them (let alone surpass them) this time, but I’m looking forward to finding out.