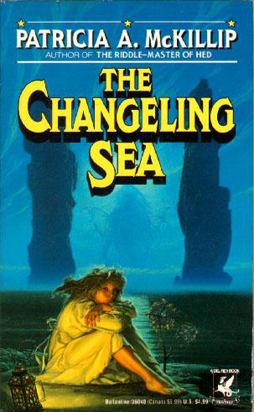 I’ve written a few times about my ongoing fascination with fantasy from the 1980s. That fascination led me to pick up a used copy of The Changeling Sea, a short 1988 novel by Patricia A. McKillip. McKillip isn’t specifically a 1980s writer — her first novel, The House on Parchment Street, was published in 1973, and she’s produced work steadily ever since; her last novel, The Bards of Bone Plain, came out in 2010 and a collection of short stories, Wonders of the Invisible World, was published in 2012. (You can find some reviews of her recent work at Black Gate: here Isabel Pelech looks at The Sorceress and the Cygnet, and here Thomas M. MacKay looks at Harrowing the Dragon). But having read some of her work from the 70s, specifically the Riddle-Master trilogy, I’d hoped to get a sense of how her work had developed through the 80s. And perhaps find the sort of unexpected angle on the fantastic some of the fantasy of that period provides.

And I did; I thought the book was excellent. It’s no surprise at all to see it was a finalist for the 1990 Mythopoeic Award. It’s precisely in the way it evokes the feel of a folktale, the feel of myth mixed with the matter of common life, that the book shines. It’s about love, and loss, and magic, and change. It has something of the feel of what now would be called young-adult fiction, with the specific kind of complexity that form can present: a young person encountering the adult world edge-on, struggling to understand what they’re finding, dealing with things that went wrong a generation ago, and trying to do no further wrong.

On a small island, one of seven making up a kingdom in a northern sea, a fifteen-year-old girl named Peri works at an inn. Her fisherman father has been taken by the sea a year ago, since which time her mother has drawn into herself. Finally, Peri can take it no more and casts a hex upon the sea. A prince becomes involved; and the magic takes a strange twist. A wandering wizard passes by. Things and people change, metamorphose magically and otherwise, and Peri must take a journey into the strange world under the ocean before the fate of land and sea will become clear. 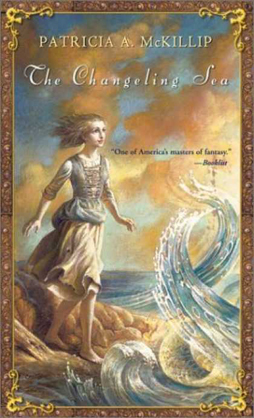 Though to say it like that is to miss the feel of the book, which has one of the more distinct tones of any genre fantasy I’ve come across. It’s a little like Leguin’s Earthsea, transposed from a Polynesian setting to the North Sea, but not much: there’s one island only here, and it is in solid contrast to the sea. More than that, there’s a working-class feel to the story, a sense of the class distinctions — but then also a feel of the Dark Ages, so a sense of how small a kingdom is, and how little distance there is between royalty and common folk in a poor northern land.

There is a sense of threat, of danger; but no violence, no swordplay. For all that the setting’s fairly limited, it feels as though Peri’s constantly exploring. Which she is, as she learns about magic and the weird forces about her. But primarily there is a feeling of wildness at work, a sense of inhuman forces: the magic of the sea.

McKillip subtly establishes the sea in this book as a kind of mythic underworld. It’s the land of Tolkien’s Faërie. The otherworld. That place beyond the fields we know to which our protagonist must venture to set things right. The title of the novel is precisely correct: the sea is the place of changes, the cause of change. The sea takes things, and the sea gives other things; the ‘Changeling’ of the title is apt here, too. So the sea is a place of story, and things shift there as they do in fable. 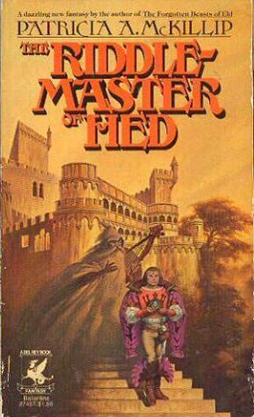 (Part of what makes Peri’s hex so powerful is a royal ring, which eventually comes back to her, changed. I found myself thinking of the story in Herodotus about the tyrant Polycrates, who threw a ring in the sea to avoid being too successful in the eyes of the gods. That ring came back to him, too. This is a different story, though, and here there is a chance for a different ending.)

The precision of the title’s carried on throughout the prose of the book. It’s short for a novel, perhaps closer to novella length, but the world feels spacious because McKillip’s style unobtrusively brings out the everyday world of innwork and fishing as well as the supernatural. In fact, the groundedness of her writing makes the magic more real. The pre-modern world of concrete nouns is also a world of archetypal nouns: this is a world in which the mundane is just waiting to become the magical.

No one really knew where Peri lived the year after the sea took her father and cast his boat, shrouded in a tangle of fishing net, like an empty shell back onto the beach. She came home when she chose to, sat at her mother’s hearth without talking, brooding sullenly at the small, quiet house with the glass floats her father had found, colored bubbles of light, still lying on the dusty windowsill, and the same crazy quilt he had slept under still on the bed, and the door open on quiet evenings to the same view of the village and the harbor with the fishing boats homing in on the incoming tide. Sometimes her mother would rouse herself and cook; sometimes Peri would eat, sometimes she wouldn’t. She hated the vague, lost expression on her mother’s face, her weary movements. Her hair had begun to gray; she never smiled, she never sang. The sea, it seemed to Peri, had taken her mother as well as her father, and left some stranger wandering despairingly among her cooking pots.

It’s a great opening. It subtly sets up Peri as somebody about whom there is some level of mystery: no one really knew where she lived. It gives us another wonderful image in the first sentence: the boat “shrouded” — recalling a funeral shroud — in a fishing net. The passage gives us Peri’s backstory and sketches in her family background. It also gives us her emotional terrain: brooding sullenly, hating her mother’s expression. It sets her up as a character with some freedom, and some motivation. But also one caught in a certain environment: the same view of the village. And, at the end, we are told that the sea took her mother and left a replacement: the sea has changed her, the sea has left a changeling behind. 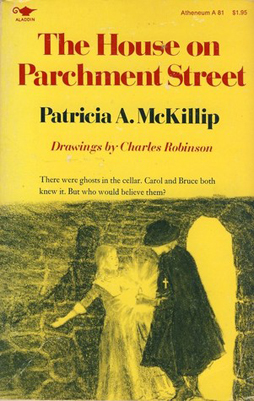 (And about that boat in the net: there’s a Viking story with a riddle in which a woman must come to a certain place neither clothed nor naked, and gets around this riddle by wrapping herself in a fishing net. The boat wrapped in the net reminds me of that riddling story in the same way the ring thrown with the hex into the sea reminds me of Herodotus. In both cases I’m not at all sure it’s deliberate, though I wouldn’t be at all surprised if it was. The point is that the language and way of thinking is just right to catch pre-modern habits of story. These things feel right and make the world live.)

That first paragraph is describing essentially realistic things. Here’s a passage from a couple pages later:

Her mother was enchanted, Peri decided. Enchanted by the sea.

She knew the word because the old woman whose house she stayed in had told her tales of marvels and magic, and had taught her what to do with mirrors, and bowls of milk, bent willow twigs buried by moonlight, different kinds of knots, sea water sprinkled at the tide line into the path of the wind. The old woman’s enchantments never seemed to work; neither did Peri’s. But for some odd reason they fascinated Peri, as if by tying a knot in a piece of string she was binding one stray piece of life to another, bridging by magic the confusing distances between things.

Magic here is a thing of small, precise materials. Common materials. But powerfully symbolic because they’re so simple. It binds life to life, linking thing to thing. It is willow twigs in moonlight; and the whole book seems moonlit, as the moon shapes the tides. 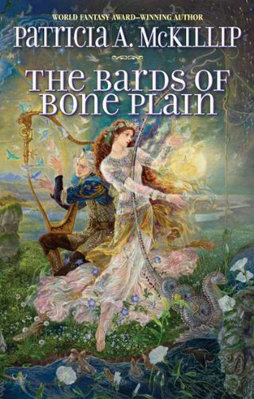 There’s a commonsensicalness to the magic of the book; the characters react to magic as magic, but also as something very real. When a great dragon with a golden chain appears in the sea off the island, the islanders immediately all speculate about how much the chain is worth and how they can get the massive chain to shore (and, incidentally, off the dragon’s neck). They’re impressed by the dragon and stunned by the mystery and all those other things; but they’re also poor fisherfolk who’ve seen more gold than they ever imagined existed.

In fact, when magic is uncanny in The Changeling Sea, it is not a magic done or seen, but a magic spoken of or read about. When magic’s described by one character to another it becomes wondrous, but less substantial. It’s when magic becomes a story that it becomes supernatural. The most mythic sense of magic comes from a description in a magical book. So the story here is wise in the ways of storytelling. Magic and story are linked.

McKillip understands riddles, and magic here works like a riddle. It joins dissimilar things. It bridges separateness. And it makes the familiar strange. Perhaps it’s for this reason more than anything that the book feels like a telling of a very old tale: because it has the kind of vision that can see one thing in another, and see the distance between them, and see how wonderful and mysterious it is that the two are in fact one. 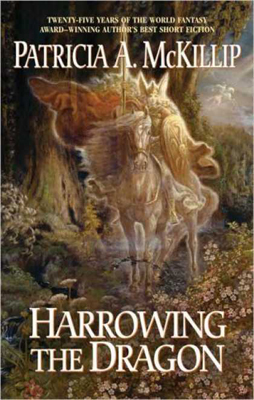 Formally, the story has strong romance aspects, but it’s also a comedy of a very old kind: a comedy in which the world is set to rights. It’s a romance in the old sense. Just as we see the magic edge-on, so we see the story. As the book goes on we realise we’ve come in at the end, that the trouble that set everything in motion began a generation ago. There was something tragic in the past, as fathers and mothers made their mistakes; but this is a comedy-romance, so it is a story of young people undoing the snarl their elders made. And it is effective, touching and quietly powerful.

Egad, I love this book. I’ve read it I DON’T KNOW how many times!

It’s tight as a stage play, not a wasted word in it. I remember despairing of ever writing something so perfectly fit together.