A Review by Thomas M. MacKay 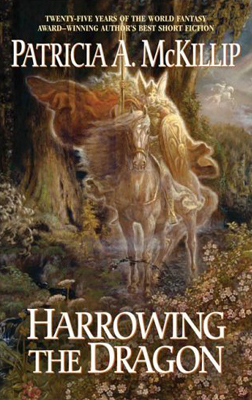 Patricia A. McKillip has long been known as one of fantasy’s most graceful and lyrical writers, with a gift for making the ordinary seem strange by turns until at the last, the strange seems ordinary and the reader sees the world through the eyes of magic. In this collection of short fiction gathered from 25 years of writing, Ms. McKillip presents thirteen lustrous, many-faceted tales exploring the themes of magic, courage, strength, and beauty.

In “The Harrowing of the Dragon of Hoarsbreath” a young woman and a not-so-young man wake a dragon of ice and cold and challenge it to free their home of an ageless winter, teaching each other surprising and painful wisdom in the process. “A Matter of Music” presents the tale of a young bard who leaves her home and position to challenge the strange and deathless music of a wild people to find the true meaning of courage and of peace.

In “A Troll and Two Roses,” a wizard’s curse entangles a troll, a prince, and a princess in the most unlikely of love triangles. “Baba Yaga and the Sorcerer’s Son” paints the ancient bogey-woman in a new light, as the son of a sorcerer blows himself somewhat confusedly into her realm beneath the earth. “The Fellowship of the Dragon” pursues the queen’s harpist into a strange hinterland where one-by-one they meet with magic and riddles and are transformed.

“The Lady of the Skulls” keeps watch over a tower of deadly treasures and mourns the treasure seekers who continually strive and fail to penetrate the tower’s mysteries, until at last one comes who sees the true treasure the tower holds. “The Snow Queen” tells a modern story of love mislaid and betrayed. In “Ash, Wood, Fire” the kitchen fire girl knows no language but that of the fire, and the wood used to tend it. “The Stranger” brings a lovely and deadly magic to bear on an island people, and is challenged by a simple weaver whose only weapons are her heart and her understanding. “Transmutations” tells the story of a young and confused alchemist, and the girl who takes notes for his experiments. In “The Lion and the Lark” a young girl goes to pay penance to the enchanted Lion and falls in love, only to see his curse transformed into something worse. The modern “Witches of Junket” are advised by a fish to face down an ancient and ageless evil with a fishing pole and a station wagon.

“Star-Crossed” explores the story of Romeo and Juliet from the perspective of someone outside the tale. In “Voyage into the Heart” a mage assists his prince in killing a unicorn, and suffers the consequences. And finally, “Toad” tells the story of the frog prince from a new and somewhat warty perspective.

Sad and joyful and sometimes surprisingly funny, McKillip’s skilfully drawn characters evoke a range of emotions while leading the reader on a journey that ultimately leaves one feeling that there may be magic just around the next corner, or at the bottom of the next soda can. For magic in McKillip’s worlds is never just the province of the powerful, and love lies somewhere close to the heart of magic — or just perhaps, magic lies close to the heart of love.