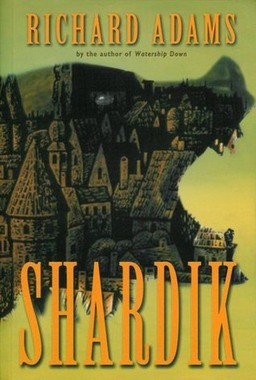 Midway through Richard Adams’s doorstop of a book, Shardik (1974), I decided I had stumbled into the world’s longest parable.

Biblical parables are typically quite brief, but Adams pulls toward the opposite shore, reasoning that in thoroughness lies salvation. And why shouldn’t he? That tactic worked like gangbusters in his astounding debut, Watership Down (1972).

Shardik could indeed function as a serviceable doorstop, but to dismiss it out of hand would be a disservice to literature in general, and to fantasy novels in particular. Shardik is a brave, uncompromising examination of how “mere” mortals encounter and deify the exceptional, thus giving rise to portents, omens, prophecies, and ultimately continent-conquering religions.

In the case of Shardik, the talismanic inciting event takes the form of a gigantic bear, a bear of monstrous, prehistoric proportions, and this bear first flees a forest fire and then crashes, half-burned and exhausted, into a far-flung outpost of human civilization, Ortelga. Unfortunately – or not, depending on one’s point of view – the Ortelgans entertain a fervid belief that God’s manifestation on Earth will come in the form of a massive bear.

While Watership Down stayed locked within the heads of its rabbit characters, Shardik spends only a few pages at the outset inside the eponymous bear’s mind, just long enough to convince any alert reader that while Shardik may be a divine instrument, he is very much a bear, no more, no less, and will behave accordingly. After that, the story turns to Kelderek-Plays-With-Children, a hunter of simple tastes who first stumbles upon the injured, recovering bear-god. 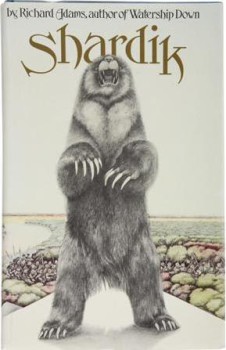 Poor Kelderek. Before he’s done, he will, according to prophecy, and without his ever intending it, become that which he most despises, and he will lie broken, both physically and spiritually, upon the rocks of his Shardik-driven faith.

I have a theory about successful authors and their books. It is my observation that when a new author enjoys a runaway success, their books thereafter become drastically longer. J.K. Rowling springs to mind; so does Richard Adams.

It must be hard for editors to stand up to a writer who has just delivered a blockbuster, but books like Shardik ought to give pause to those would-be writers who see in their words the divine authority of the auteur, and would refuse cuts and trims either as a matter of course or a point of honor. You can see how the dynamic plays out: the editor suggests that the story might be outweighed by the verbiage; the writer haughtily suggests the editor can go take a flying leap.

The balance is delicate, of course. The detail of Shardik’s world-building may be its greatest asset. What to cut? If a poor reader may be permitted to make a suggestion, uselessly late, I would begin with the many (many) long metaphorical passages. The following example hails from p. 412 (of the 2002 Overlook Press edition, with a glowing forward by Robert Silverberg):

As a man tormented by a lawsuit, by money troubles or anxiety about a woman, can nevertheless derive pleasure and actual solace from a game skillfully played or a plant which he has nurtured into bloom (so accurate, despite all the mind’s attempts to mislead it, is the heart’s divination of where true delight is to be found), so Kelderek, despite his conviction that he would die in Zeray, despite his fears for the Tuginda, his grief for the evil he had done and the hopelessness of his longing for Melathys (for what possibility could there now be, in the time left to him in this evil place, of healing the wounds inflicted by all she had undergone at the hands of men?), still found comfort in the windless, cloudy afternoon, in the light on the water, the silence broken only by the faint breeze and river sounds and in his own ability, where a man lacking it would have wasted time idling at one end of a motionless line. 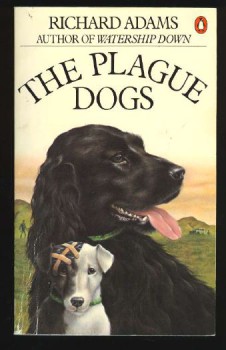 Still with me? Then believe me when I tell you that Adams attempts gymnastics of this sort on a regular basis, sometimes two to a page.

Even so, Shardik remains at its core a very linear book. Kelderek, either leading Shardik, jailing Shardik, or stumbling after Shardik, charts step by plodding step the trials of Job. Only toward the end, in the last hundred and fifty pages or so, do loose ends from earlier chapters begin to reassert themselves and reveal the novel’s design––and make no mistake, Adams has thought this through. Kelderek’s seemingly random adventures do struggle at last to cohesion and closure.

I read another Adams title, The Plague Dogs (1977), when I was thirteen, on a walking and driving tour of England’s Lake District. The scenery made the book come alive (although I somehow did not realize, at the time, that these were also the hills that had given rise to Peter Rabbit, Tommy Brock, and Jemima Puddle-Duck), but the book itself was perhaps the first “adult” title I’d chosen where I felt in the dark, left behind, and baffled.

I wonder if I would feel differently as an adult, or if Adams’s gloriously ambitious device of placing readers inside the damaged heads of two dogs escaping an animal testing facility would again leave me befuddled?

As with The Plague Dogs, if Shardik errs, it is not for want of ambition, and I appreciate that, even when the results strain and creak. There are no compromises here; the reader is asked to buy in wholesale, or close the covers.

If you elect to continue, perhaps Shardik the Power of God awaits.