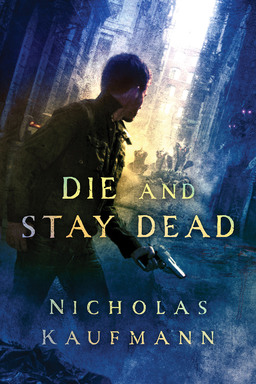 Last October, I talked about Nicholas Kaufmann’s dark fantasy novel Dying is My Business, which I called “the tale of a badass hero facing down the forces of darkness in modern-day Brooklyn.” I’m very pleased to see the sequel arrive this week — this looks like a gritty and appealing dark fantasy series I can really sink my teeth into.

In this pulse­pounding sequel to Dying Is My Business, Trent, a man who can’t stay dead or retain his memories, tries to uncover his connection to a deadly doomsday cult bent on destroying NYC.

A brutal murder in Greenwich Village puts Trent and the Five-Pointed Star on the trail of Erickson Arkwright, the last surviving member of a doomsday cult. Back in the day, the Aeternis Tenebris cult thought the world would end on New Year’s Eve of 2000. When it didn’t, they decided to end it themselves by summoning Nahash-Dred, a powerful, terrifying demon known as the Destroyer of Worlds. But something went wrong. The demon massacred the cult, leaving Arkwright the sole survivor.

Now, hiding somewhere in New York City with a new identity, Arkwright plans to summon the demon again and finish the job he started over a decade ago. As Trent rushes to locate a long-lost magical artifact that may be the only way to stop him, the clues begin to mount… Trent’s past and Arkwright’s might be linked somehow. And if they are, it means the truth of who Trent really is may lie buried in the twisted mind of a madman.

Die and Stay Dead will be published on Tuesday, September 30 by St. Martin’s Griffin. It is 388 pages, priced at $15.99 in trade paperback and $10.99 for the digital edition. The cover is by Chris McGrath.