Hey Independents! Well, today we get to the end of the first and only season of Firefly. Alas, it’s a bittersweet experience, but let’s load up and dig in for the last three shows.

The crew is at a bazaar, with Simon and Kaylee having a date until Simon ruins it by being Simon. Mal is having a hard time finding a fence for the Lassiter pistol (see last week’s installment, episode 11). They check the local post office, where Jayne has a package from his mom – it’s the hat!!! (You Browncoats know what I mean. For everyone else, just Google “Jayne’s hat.”)

Mal and Zoe receive a crate. A sarcophagus, actually. Inside is the corpse of a young man. His name was Tracy. Mal and Zoe fought beside him in the war. In a brief flashback, we get the distinct impression this kid was kind of a dunce, but a lovable one.

Mal takes the coffin onboard Serenity and finds an audio recording. It explains that Tracy got into trouble and expected to be killed. He wanted Mal and Zoe to take his body home. While the ship and crew take off for the kid’s homeworld, some scruffy-looking federal agents bust into the post office looking for the sarcophagus. The post master tells them who took it.

Kaylee is listening to Tracy’s recording in her room when Simon comes looking for her. He leaves her alone.

While Mal and Zoe swap war stories, the ship is attacked. The feds have caught up to them. They want the coffin.

While stalling, Mal and crew search the coffin for what the feds could possibly want. Simon prepares to cut open the corpse when Tracy suddenly wakes up. It turns out that Tracy drugged himself to appear dead. (Really? It fooled Simon, who used a similar drug just a couple episodes ago?) He is carrying black market super-organs inside his body and tried to double-cross his partners.

Tracy and Kaylee flirt while Wash does some fancy flying to evade the feds. Serenity lands in a crevasse on the planet, but the feds start dropping aerial depth charges.

When Shepherd Book convinces Mal to give up, Tracy grabs a gun to stop them from surrendering. Zoe shoots him, but he takes Kaylee captive. Mal tries to talk to Tracy, but is forced to gun him down.

The feds board Serenity. Book reveals these agents are out of their jurisdiction, running this organ smuggling job on the side. Seeing they are outgunned, the feds back off. Tracy dies, but he’s sorry. They take him home.

This is one of those episodes with a lot of depth under the surface. It hearkens back to the war, which plays such a big part of Mal and Zoe’s backstory. It also catches Mal in a position where he must choose between his crew and his war buddy. I think he makes the right call, of course, but losing Tracy like this hurts him and Zoe. And it hurts Kaylee, too, which shows us even more of her character depth. 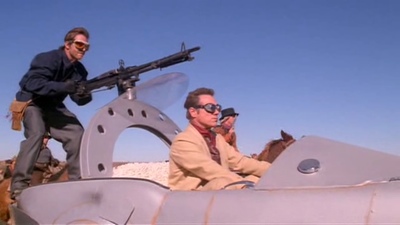 This episode begins with a band of brigands as they ride up to a brothel. They drag out one of the working girls, who is pregnant, and their leader, Rance Burgess, takes a DNA sample. If it turns out to be his baby, he says he’ll be back for her.

Inara gets a call from the brothel’s madam, Nandi, who is an old friend (now in exile from the Companion organization). She’s asking for help. Mal agrees to go.

After talking to Nandi, Mal and Inara go to the theater to scope out this Rance guy. When they get back to the brothel, Mal tells the madam that she and her girls need to leave, because this bad guy isn’t going to stop until he gets what he wants.

This is big, because Mal hardly ever runs from a fight. But Nandi won’t leave. This is her place and she’ll die to protect it. Mal and the crew plan a defense of the brothel. Mal and Nandi get to talking and eventually slip into bed together.

Rance learns (from a traitor whore) that the brothel has some help and rounds up a posse to teach those “wicked women” (whom the town seems to enjoy utilizing) a “lesson.”

Inara bumps into Mal as he’s leaving Nandi’s room and says she’s fine with it. But she cries when she gets alone.

Rance and his posse show up and a gunfight commences. Of course, the pregnant girl goes into labor at this moment for maximum drama. While the crew shoots it out with the posse, the traitor whore lets Rance inside the brothel. The baby is born, and Rance shows up to take it. Nandi tries to stop him, but Rance guns her down and takes off. Mal chases him on horseback! Mal stops Rance and drags him back to the brothel where the new mother shoots him dead. They bury Nandi.

As Serenity departs, Mal and Inara talk about their feelings, and Inara announces she is leaving the ship. Mal is stunned.

I’m on the fence about this episode. Don’t get me wrong. I still like it, but I’m not sure if I can rank it among the best. There is a lot a depth here, just like the last episode.

The defense of the brothel reminded me of Old West movies, where the good guys are holed up in a house or cabin, trying to fend off the baddies. The girl going into labor during the battle was a little silly, but hey, it increased the tension.

The relationship between Mal and Inara remains as murky as ever. She makes a living as a prostitute, but breaks down when she learns that Mal and Nandi had sex? I liked the emotion displayed, but wasn’t sure it made sense. I do, however, understand why she decided to leave to ship. Mal threatens to upset her tightly-controlled world, which is funny because the opposite rationale will be used in the movie, but I’m getting ahead of myself.

Overall, I have to rate this episode high because of the quiet moments — Mal and Nandi, Mal and Inara. 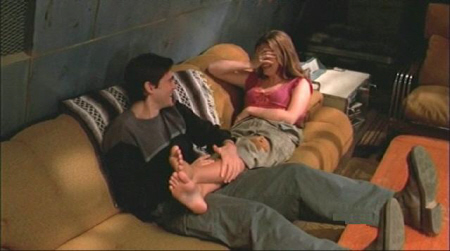 This is the final episode, possibly forever.

River wakes and moves through the ship. Simon is talking to Kaylee, Jayne is talking to Shepherd Book, Wash and Zoe are kissing, Mal is talking to Inara. With each meeting, River thinks she is hearing their hidden thoughts and feelings. River picks up a stick, and it turns into a gun. The crew is surrounding her, looking very worried.

Unknown to them all, Serenity is being followed. The strange ship belongs to a bounty hunter (Jubal Early) tracking River. He spacewalks to Serenity and sneaks aboard.

The crew is discussing River’s mental problems. Kaylee tells them all about how River shot three thugs in Niska’s base without looking (Episode 10) and how much it scared her. They guess she is a psychic, but don’t know what to do about her.

While most of the crew is sleeping, Mal encounters Jubal in a corridor and gets knocked out. The bounty hunter locks the crew in their berths, and then he finds Kaylee in the engine room. He threatens her until she tells him where River sleeps. The hunter knocks out Shepherd Book next and captures Simon, but River is gone from her room.

Jubal forces Simon to come with him as they search for River. There is a clever line where Jubal makes an offhand remark that Book isn’t a Shepherd, hinting at Book’s mysterious past. Although Jubal is insane, we can assume (I think) that he knows his profession pretty well… 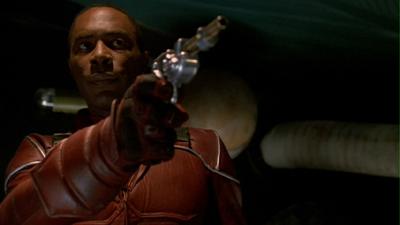 When Jubal can’t find River, he calls over the intercom for her to come out or Simon dies. River’s voice comes through the ship, saying River is gone, melted into the ship because no one wanted her. Then River talks to the crew with the same ghostly voice, telling them a secret plan. Meanwhile, River keeps Jubal occupied by saying things about his past that she shouldn’t know, playing on his unstable mind.

Jubal finally figures out that River is in his ship, and that really shakes him up. But River says she’ll go with him freely. She’s too dangerous to stay on Serenity, too much trouble. It’s a touching sentiment as she volunteers to sacrifice herself for the safety of the crew. Simon tries to jump Jubal and gets shot.

Jubal heads back to his ship, but he is surprised out on the hull by Mal, who shoves him into space. Then River returns to Serenity.

Zoe operates on Simon and the rest of the crew is back to what passes for normal. Kaylee is playing a game of jacks with River.

Jubal gets the last line of the season as he floats away in space: “Well, here I am.” 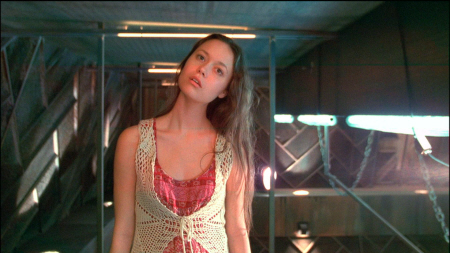 This is one of my favorite episodes. It really gets to the heart of the season and injects a sense of otherworldiness. How far would you go to do the right thing? Simon and (especially) River have been a pain in Mal’s butt since the first episode, but he defends them with his life again and again. Also, we see that the crew feels the same way. (Except perhaps Jayne.) River can be trouble, but she’s part of their family.

I also like how River gets to be more proactive, giving us another glimpse of what she’ll one day become — a force to be reckoned with.

Finally, I LOVE the villain in this one. Jubal Early is a storm, both highly capable and highly unstable. His philosophical ramblings are delicious. I assume he must be an early (hehe), albeit twisted, prototype of the agent we’ll see in the movie.

Speaking of which, next week I’ll be dissecting the Serenity movie. Thanks for reading!

[…] mentioned in my blog about the last  episode (Objects in Space) that I suspected the villain (Jubal Early) may have been a prototype for this Operative. Both are […]