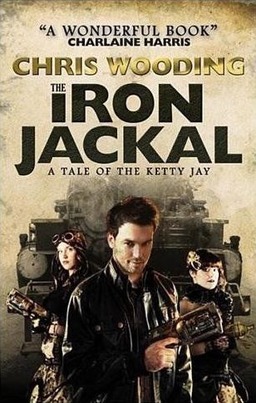 Chris Wooding’s Ketty Jay novels come packed with witty dialog, high-flying adventure, and a hearty dose of steampunk fantasy — not to mention some great covers (see the British editions of the first three here). The previous volumes, Retribution Falls and The Black Lung Captain, were published in the US by Bantam Spectra; with the third Wooding switches publishers to Titan, bringing a new look to a series that has been compared to Firefly. If you’re on the hunt for a new series that includes sky pirates, quirky characters, and swashbuckling fantasy, this might be exactly what you’re looking for.

Things are looking good for Captain Frey, roguish captain of the Ketty Jay and her dysfunctional crew of layabouts. Accustomed to living on the wrong side of the law, running contraband, robbing airships and generally making a nuisance of themselves, Frey’s rag-tag bunch of no-hopers is finally on the rise from bottom-feeding freebooters to bar-room celebrities. And, just for once, nobody is trying to kill them.

Even Trinci Dracken, Frey’s one-time fiancée and long-time nemesis, has given up her quest for revenge. In fact, she’s offered him a job — one that will take his crew deep into the desert heart of Samarla, land of their ancient enemies, where the secrets of the past lie in wait for the unwary. Secrets that might very well cost Frey everything.

Join the crew of the Ketty Jay on their greatest adventure yet: a story of mayhem and mischief, roof-top chases and death-defying races, murderous daemons, psychopathic golems and a particularly cranky cat.

Chris Wooding is also the author of Malice, Storm Thief, and over a dozen other books. He has announced that the fourth volume in the series, the upcoming The Ace of Skulls, scheduled for release in August, is also the last.