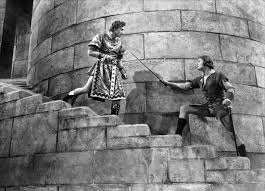 A few weeks ago, my colleague Jon Sprunk gave us a marvelous post on the weapons of fantasy. Like Jon, the weapons were very much what attracted me to fantasy in the first place. But I loved swords and sword fighting before I ever picked up my first fantasy novel (The Lion the Witch and the Wardrobe, in which, by the way, the tradition of named weapons is followed with Peter’s sword Rhindon).

I’m not sure what got Jon started off, but what attracted me to sword fighting, and prepared me for the fight scenes in my favourite genre, were movie sword fights, beginning particularly with those in Errol Flynn’s Captain Blood and The Adventures of Robin Hood.

It was from this last movie that I also gained my life-long love of archery, and the great archer Howard Hill, who did all the trick shots for Flynn, including the iconic splitting of the arrow.

Flynn did do all his own fencing in the films, but unlike his frequent opponent and co-star, Basil Rathbone, he didn’t take it up as a sport.

The next movie to make any impression on me was the early Cyrano de Bergerac, with Jose Ferrar, followed much later by Richard Lester’s movies The Three Musketeers, The Four Musketeers, and The Return of the Musketeers. There have been quite a few Musketeer movies since then, but most of them aren’t quite as good, especially in the fencing area. Gerard Depardieu’s Cyrano is well worth seeing, however.

These are all historical movies, of course, not fantasies, but what they do have in common with the Fantasy genre is the focus placed on the sword. All of the main characters in these films, and in the stories they were based on, were swordsmen – and yes, they were all swordsmen. Like it or not, that’s historical as well.

Their talent with a sword was not only part of their characters, part of what made them who they were, but a necessary element in the plot. Like Iñigo Montoya in The Princess Bride, or  Count Rugen for that matter, they are all great swordsmen. Though Count Rugen should remind us that being great with a sword didn’t always make you a hero. Some of the great villains of film and literature alike have been famous swordsmen.

More recently, we’ve seen actual Fantasy movies involving swordplay, some of it similar to what attracted me in the first place, and some quite different. In many ways, the swordplay in movies like LOTR, Pirates of the Caribbean, Game of Thrones, and so on, is more accurate. At least, there seems to be some understanding that at one time in history, there were broadswords.

I’d like to take a moment to acknowledge an actor who bridges the gap between the historical and the fantastic. I’m speaking, of course, of Christopher Lee, who plays the villain Rochfort in The Three Musketeers and the villain Saruman in LOTR. Like Basil Rathbone (who also played the villains), Lee was another actor who became an accomplished fencer in real life.

Ironically, what’s probably done more for the popularity of swords and fencing among genre fans is the light saber. When Obi Wan said “an elegant weapon for a more civilized age,” he could have been talking about the sword. In watching Luke train with it, we’re reminded that using a sword takes long training, and using it well takes great skill. It’s a personal weapon, and as such is well suited to storytelling, where the focus is on character and plot. We’re telling the stories of individuals who fight – and kill – with their own hands.

@ Jeff: Hah! Scaramouche! One of my favourites (along with the Scarlet Pimpernel) that I always forget to mention. I think it’s because there’s a restaurant by that name in Toronto (or was) and now I think of it in terms of food.

The Adventures of Robin Hood is one of my favorite movies.

I think its still the best robin hood movie.

One day someone will make a good robin hood movie, maybe even include Will Stutely.

I know I’ve mentioned it on previous posts, but if you mention fencing I’m legally obligated to mention On Guard (Le Bossu):

(Some bits also available on YouTube for your viewing pleasure.)

The other (relatively) modern movie that hooked me on swordfighting was the orginal Wesley Snipes Blade.

(Well, to say nothing of various Chinese movies, Crouching Tiger not least amongst them.)

In this modern age, with lots of gun dakka, there is something *personal* about swords and swordplay as a means of defending oneself.

Did you ever see “Ice Pirates”? One of the conceits of that silly space opera movie is that with reflective armor, lasers are NOT very effective. So what do protagonists and antagonists use? Swords, of course.

I love Errol Flynn ands his clashes with Basil Rathbone in The Adventures of Robin Hood and Captain Blood, but their excitement is as much due to Michael Curtiz’s flamboyant direction as to the fighting itself. For my money, the best of all movie swordfights is Tyrone Power and Basil Rathbone in The Mark of Zorro. It’s fought in a constricted space, which makes it all the more intense, and the movements are faster than any other fight that I can think of; there are few extraneous flourishes – you can really believe that these are two highly skilled men whose every move is intended to kill the other. Another great one is Tony Curtis and Ross Martin’s sabre battle in The Great Race.

@ Joe: Thanks for the reminder, both for On Guard, and for Lee in the SW movie.

@ PrinceJvstin: No, never saw Ice Pirates, heard bad things so I stayed away. Likewise haven’t seen something called The Musketeer, with Tim Roth.

@emcgargle: I own a copy of the Mark of Zorro, it’s priceless! Santa Maria! You’re right in that you see what it means when you have two skilled people. I counted the Flynn/Rathbone movies first because those were the ones I’d seen first.

There is nothing bad about The Ice Pirates unless you don’t like that kind of humor.

I can’t think of an Errol Flynn sword-fighting movie in which the sword fighting doesn’t annoy me. Especially Robin Hood with those floppy swords.

A modern one I enjoy is The Count of Monte Cristo, with Caviezel and Pearce.

@ Jeff. Absolutely agree with regard to that version of the Count of Monte Cristo, though an earlier one with Richard Chamberlain wasn’t horrible. I do think that in many ways, and barring a few obvious examples, the swordplay is better in modern films.

What? No love for Richard Lester’s Robin and Marian or Ridley Scott’s The Duelist or Kingdom of Heaven. All great film were the duels play a pivotal or central role in the story.
The Duelist alone for William Hobbs choreography, using the techniques of small-sword, saber, and saber on horseback. The entire movie is based on the dueling culture of the beginning of the 19th Century.

@ arn-toura: Wow, thanks for these recommendations. Robin and Marion I saw, once, many years ago and frankly don’t remember. I only have a vague awareness of the other two films, but I’m going to find them now. Thanks again.

I don’t remember a lot of The Duellists, but I did like the ending. A lot.

[…] up on my recent sword-fighting posts, I’d like to talk about two ERB novels that are much less well-known than the ones I refer to […]

Really good observations about the sword being a personal weapon, and more suited to a character driven story then a gun. I also think it rings true as a more ‘human’ form of combat. Especially when modern warfare is so dehumanising; where lives are reduced to numbers and hundreds of people can be killed simply by pushing a button. And as grisly as sword fighting could be, it’s sounds marginally less scary then warfare today. But then, I’ve never been in a war.

@ Connor. I know I’ve read somewhere that one of the reasons swords and other such weapons (long bows) were replaced by guns and cannons, etc. is that it takes much less time to train someone to use them properly.
Significantly, Musketeers aren’t known for their use of muskets (at least in fiction) but for their swordsmanship. Sooner or later, they had to look an enemy in the eye, and kill them personally.