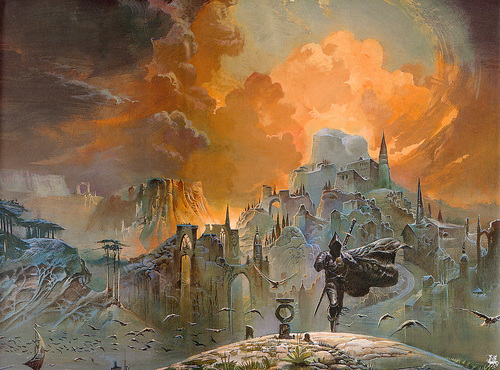 A few weeks ago, while discussing the cover of the Panther edition of Fritz Leiber’s Night Monsters, I mentioned that I’m a huge Bruce Pennington fan. Bruce was very kind to me when I called him out of the blue in 2007, hoping to buy the rights to two of his paintings to use as covers for Black Gate. Once he’d had a chance to see the magazine for himself, and determined that I was simply a fan with a very limited budget, Bruce was extraordinarily gracious, agreeing to my modest offer without a murmur of complaint, and inviting me to look through his vast portfolio and select the covers I wanted.

Well, this was like being a kid in a candy store. I already knew that I wanted to use his extraordinary painting of an armored horseman, one of the finest pieces of sword & sorcery art I’d ever seen. It was originally published on the Panther edition of Lin Carter’s anthology Flashing Swords 2. 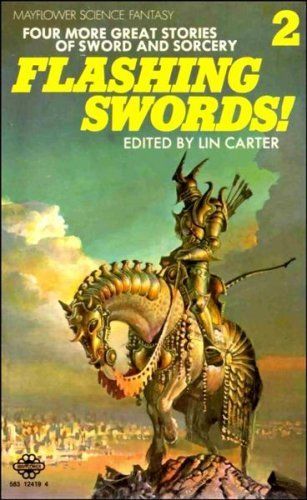 It eventually appeared as the cover of Black Gate 12. 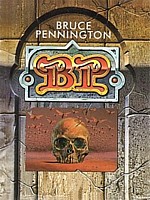 When you’re looking for cover art, you always want something that communicates the aesthetics and tone of your magazine, and this cover captured the spirit of Black Gate better than anything else I’d seen. To this day, I still consider it our most perfect cover.

But we’d negotiated for the use of two images… what to use as the second painting?

To help me decide, I immediately ordered a few of Bruce’s art books — including the delightfully compact Paper Tiger Miniature Bruce Pennington (left), which proved to be surprisingly useful. (Sixteen pages from the book have been scanned for Bruce’s website; check them out here.)

It was an agonizing search. If you’re at all aware of the breadth of Bruce Pennington’s catalog, you’ll understand that narrowing the search was enormously challenging. I could rule out his most recognizable work, of course, as well as images that were overtly horror, or didn’t suit the contents of Black Gate.

Even so, that left a lot to choose from. For example, I was sorely tempted by his cover for the British edition of Robert Silverberg’s The Man in the Maze. 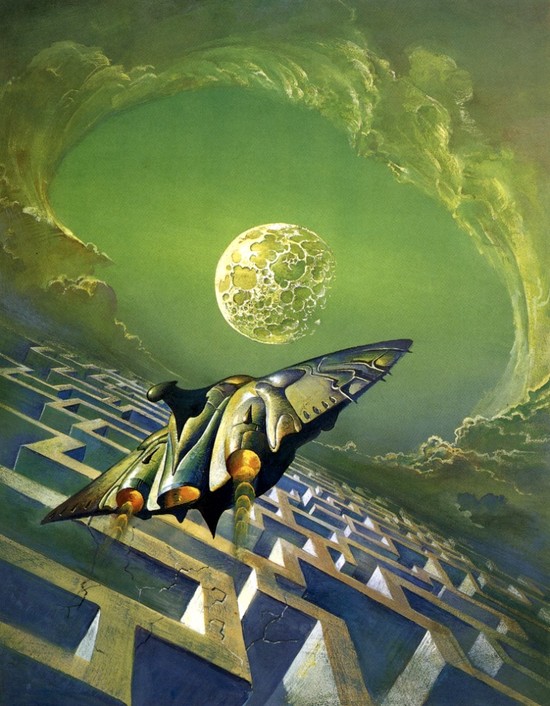 But ultimately, I thought it was a little too science fiction in tone.

I finally settled on a series that Bruce had painted for the British editions of Gene Wolfe’s Book of the New Sun, starting with the cover of Shadow of the Torturer, which you can see at the top of this article. These images were gorgeous and mysterious, perfectly suited for use as magazine covers, and as far as I could determine they had never been published in the United States.

Of course, this is where practical considerations threw a wrench into things. The moment I told Bruce about my choices, he said the horseman would be easy — he had a high-res negative he could send me immediately. But he no longer had copies of the Wolfe covers. And unfortunately, he no longer owned the original paintings, so he wasn’t sure when he could get them.

This was unfortunate. I was on a schedule, so I couldn’t wait to see if the images would turn up. Instead, I moved on to my second choice, a vivid and colorful desertscape originally used as part of Frank Herbert’s Dune series. 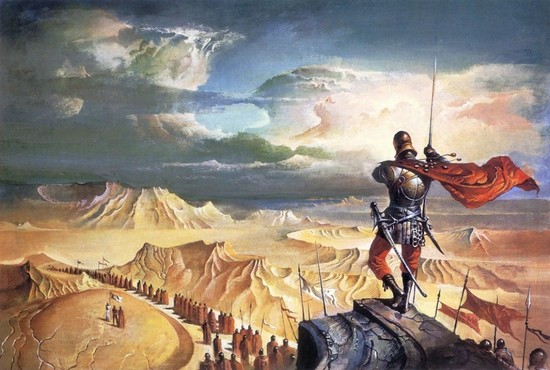 I was completely happy with my choice, and it eventually appeared as the wraparound cover to our first double issue, Black Gate 14.

Of course, I always wondered how things would have turned out if we’d used different images. Here’s a look at some of the covers I would have loved to have used for future issues of the print version of Black Gate, starting with the gorgeous cover of the British version of Gene Wolfe’s The Citadel of the Autarch. 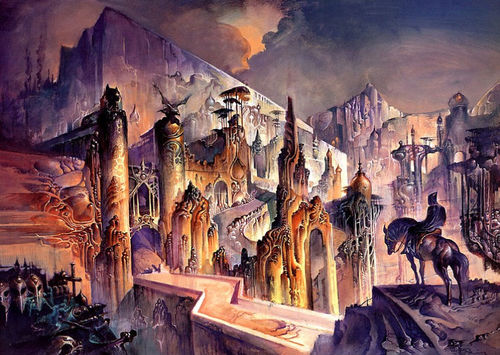 And the cover for Claw of the Conciliator. 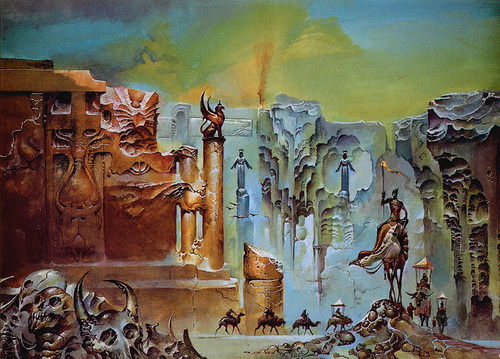 And one that I thought would have made a quirky but eye-catching choice, the cover to Mysterious Railway Stories: 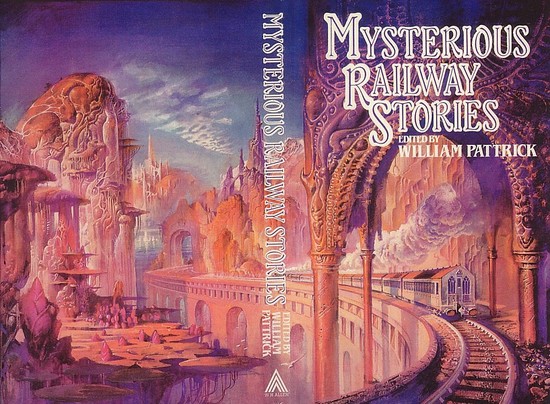 Of course, none of this is truly “Lost Art,” as it has been published in the UK (if not in the US). But it’s lost in the sense that it will never grace the cover of an issue of Black Gate. So enjoy what might have been.

Finally, I wanted to point you toward Bruce’s brand new website, launched in conjunction with an exhibition held in Autumn 2013, when he was a guest of honor at the World Fantasy Convention in Brighton. There’s a generous sampling of his art here, and the webmaster, Nigel Suckling, even reprinted the cover of Black Gate 12 as part of a montage highlighting how popular that image has become. Here’s Nigel:

Sometimes a particular book-cover painting has several reincarnations through different publishers throughout the world, earning the artist more royalties in the form of second rights. The Armoured Horseman shown below is a typical example. Originally produced by Pennington for a British publisher as the cover of a collection of Sword & Sorcery stories, it was later used by Dutch and other publishers in the same standard paperback format.

More recently (2008) it was reproduced in the United States on a larger scale as the cover of a luxury ‘coffee table’ anthology devoted to supernatural fiction.

More recently still in June 2009 the same picture appeared on the cover of Fantasy Art magazine published in Beijing, the first and foremost forum for both western and eastern fantasy art in China. 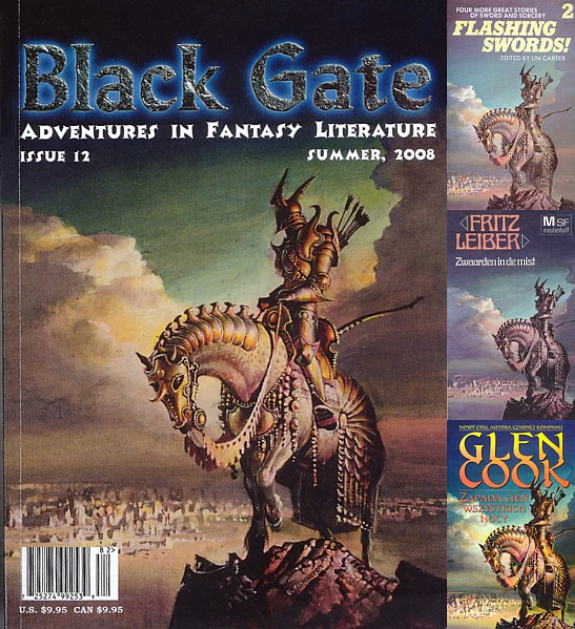 I appreciate Black Gate being called “a luxury ‘coffee table’ anthology,” although we still humbly suggest the term “magazine.”

Love those Gene Wolfe covers! I’d never seen them before.

They are gorgeous, aren’t they? I’m tempted to order a set of the British editions, just so I can have them in my collection.

Bruce is one of those rare artists who can seem to put an entire world into a painting and make you say, “I want to go there.”

CMR, what amazes me even more is that he can reveal that entire world as a harsh environment, a place where even a person of might dares not travel without arms and armor — where one’s first thought on arrival would be, How am I going to avoid death by dehydration in the next three hours? — and we still say “I want to go there.” None of those landscapes are easy vacation spots. We want to go because the very bleakness is so magnificent.

> Bruce is one of those rare artists who can seem to put an entire world into a painting and make you say, “I want to go there.”

Well said. He triggers the imagination, no doubt about it.

> None of those landscapes are easy vacation spots. We want to go because the very bleakness is so magnificent.

I used to own most of those covers. I probably picked up The Shadow of the Torturer because of that one.

What a brilliant artist!

Thanks for posting this!

There was a book I was looking for for years, but I thought Barlowe did it… “Eschatus” (forgot the name) about the Prophecies of Nostradamus!

Art styles are like fingerprints, now I recognized it, even though I didn’t earlier.

In abstract I’m against re-purposing coz I like when the image is based on the story in the book. However, his awesome art argues an exception big big time! However, I’d also argue for generic art if that must be an option, since fans of existing work would notice and might be upset.

Ever look at “Deviant Art” though? In between the childish crayon and girls into self cutting there are a bunch of excellent artists and even some existing veterans now, like Joe Jusko… (SSOC covers, others)

> I used to own most of those covers. I probably picked up The Shadow of the Torturer because of that one.

If you ever see another copy, pick one up for me! I’d love to have that cover on my edition.

[…] in his art — and how we licensed two of his paintings as covers for Black Gate – in The Lost Art of Bruce Pennington. Over the years I’ve collected much of his work, and seen a great deal more online and in […]