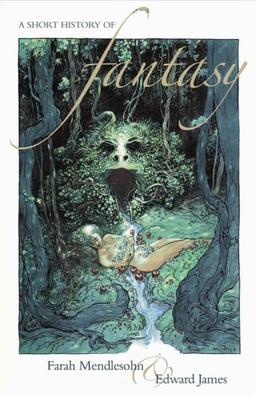 I recently reviewed L. Sprague de Camp’s 1976 Literary Swordsmen and Sorcerers and Lin Carter’s 1973 Imaginary Worlds. As good as both were, I lamented that there didn’t seem to be a history of fantasy past the mid 1970s.

But thankfully, I was wrong. Enter Farah Mendlesohn and Edward James’s wonderful 2009 A Short History of Fantasy.

Besides treating all of the 70s, 80s, 90s, and even the first decade of the 21st century, this volume has other merits that de Camp and Carter’s lack. In sum, it is a more comprehensive and well-rounded approach to the subject. I’ll spend a little time highlighting why and then give some brief critical comments.

First, this book deals with more than just literature, per se. Mendlesohn and James also talk about movies, games, and even children’s lit in each period –- and most of the chapters tackle a single decade. I think this is insightful, in that it condenses all the possible influences that may have gone into fantasy.

For example, given that many fans will agree that Tolkien’s The Hobbit and C. S. Lewis’s Chronicles of Narnia were gateway drugs, so to speak, to their love of the genre, it makes sense to think more about other children’s fantasy and their connection to the field. For instance, Mendlesohn and James address in some detail such writers as J. K. Rowling and Philip Pullman. I think more should probably be written about the influence of children’s books upon fantasy.

Another huge advantage over de Camp and Carter is author perspective. There are two authors here; neither is American and one is a woman. It should be obvious that, usually, two perspectives are better than one; a second perspective can bring attention to things that a single author may miss. Thus, there’s a better chance that more diverse fiction will be covered and less minutia (there are drawbacks to this as well that I’ll get to later).

Given that both authors are not American, I would think that this would also give us a wider scope than perhaps de Camp and Carter’s American-centric book. I was a bit concerned that Mendlesohn and James might spend an inordinate amount of time on fairly unknown British or European fantasy authors. They did, thankfully, bring to my attention some authors I wasn’t familiar with.

Nevertheless, I really did not discern a huge difference in focus upon authors (pre-mid-1970s) from de Camp and Carter. Mendlesohn and James seem to identify with roughly the same fantasy nodes. Still, it was refreshing to hear a non-American perspective.

Finally, having a female perspective — no disrespect to Edward James — was definitely perceivable and gratifying. Besides giving more attention to female fantasy authors than de Camp or Carter, it seemed to me that Farah Mendlesohn also brought a lot of focus upon how the growth of female fandom has affected fantasy, especially over the past couple of decades. 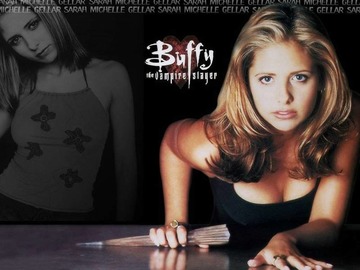 She also, it seemed to me, implicitly argued that there was a connection between the growth of the “young adult” category of genre with the growth of female readership. Mendlesohn talks quite a bit about how more female-inclusive or female-friendly things like Buffy the Vampire Slayer have affected fantasy. I think a lot more investigation needs to be done here. But I’m thankful to see a history that at least attempts to address fantasy as more than just a boy phenomenon.

I have a few small criticisms, though. One, as I briefly mentioned, multi-authorship can have its drawbacks. For instance, rather than speaking with one mind, inconsistencies arise. For instance, at one point we’re told that the Conan movies of the 1980s “badly damaged” Robert E. Howard’s reputation (p. 36). But later we’re told that at least the first Schwarzenegger flick, “is actually quite a good movie” (p. 120). Little things like this are a bit annoying.

There’s another difference between this book and de Camp and Carter’s respective histories, and that leads to another small criticism:  Mendlesohn and James are academics, and this book has more of an academic feel. Don’t get me wrong — it is highly approachable, readable, and very enjoyable for fantasy fans. And it’s also clear that Mendlesohn and James are fans, to some degree.

But I have to say that de Camp’s and Lin Carter’s histories are written by — I don’t know how else to say this — “true” fans. Fans pure and simple, or devotees. There’s just something contagious about a fan writing about the thing he or she loves, and writing for no other reason.

This is not a slam against Mendlesohn and James. Perhaps it’s just a cheer for the non-academic writer.

Overall, A Short History of Fantasy is a great and informative read, with a broader and longer historical view than the histories of fantasy I’ve already reviewed. I recommend it.

James McGlothlin asks us to forgive him if the above review sounds too academic. He is currently finishing his doctorate in philosophy at The Ohio State University.

That’s a good review James, but as somebody who knows the authors, let me assure you that they are genuine and full-blooded fans of the genre.

If you make it to WorldCon in London next year, you will get to meet them, as they are both helping to organize the event.

I wasn’t quite sure how to word the last part of this review. All I can say, from my perspective, is that de Camp and Carter’s histories have some sort of excitement about the subject that this book does not. I’m sure that this has more to do about being a primarily academic text than anything else. As I said, the comment was not meant as negatives against Mendlesohn or James.

I’ve never been to WorldCon before (or any convention for that matter). I doubt I’ll make London my first.

P Two Is Better Than One…

I’ve never been to WorldCon before (or any convention for that matter).

Oh, you are really missing out! At Chicago the year before last I got to hang out with the Black Gate cronies and it was tremendous 🙂

[…] Two Perspectives are Better Than One: A Review of A Short History of Fantasy […]