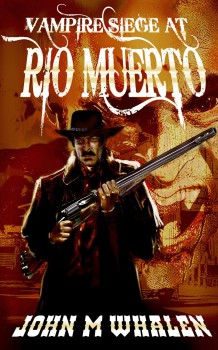 I have a soft spot for Weird Westerns. (I know, last month I said I have a soft spot for dwarves. Well, they’re both true. If anyone ever writes a Weird Western with a dwarf protagonist, I’ll be all over it.) This wasn’t always the case, but a couple of years ago I had an idea for a story that turned out to be a Weird Western, and I developed an appreciation for the genre in the process of writing it. (Not that I’ve yet managed to sell that story, but that’s neither here nor there.)

I didn’t want to review  Vampire Siege at Rio Muerto last month, partly because I had just reviewed a vampire book the month before, and to be honest, I’m not much of a fan of vampires. At least in this book, the vampires were unabashedly bad guys, drinking the blood of the living and engaging in all sorts of debauchery. The main character of the book is Mordecai Slate, a professional vampire hunter in the Old West. Apparently, vampires were more of a problem back then than I realized. Mordecai has been hired to capture, rather than kill, a vampire, and to bring him back to be staked by Don Pedro to avenge his daughter. It’s an unusual mission for Mordecai, but the pay is very good, so he takes it.

Capturing the vampire, Kord Manion, proves easy enough, but soon Kord’s brother Dax and his gang are on Mordecai’s tail. He plans to set up an ambush for the six of them, but he runs into some trouble on the way, rescuing a girl from some outlaws, and gets himself shot. He needs to visit the doctor at the small town of Rio Verde, renamed Rio Muerto since the river dried up, and that doesn’t give him enough time to recover before Dax and his gang are at the town’s doorstep and he needs to convince the suspicious townsfolk to help him before the place is destroyed.

I’ll admit that I wanted to like this book more than I did. It has an interesting plot, with plenty of twists and action to keep your attention, and Mordecai Slate works as a protagonist for this type of story. But I felt like the writing could use work. There were a lot of short, choppy sentences, which were often repetitive, that kept the prose from flowing smoothly. Short sentences can be helpful for punctuating scenes and action, like exclamation points, but that only works when they’re the exception, not the rule. They can work in dialogue, but long monologues really need to flow smoothly, and the use of terse sentences for Dax Manion’s speeches were especially disruptive. There were also a number of anachronisms in the way people talked, though for the most part they weren’t especially distracting. For example, the use of the word Mickey to refer to a drug in one’s drink, which actually dates to the 1920s. There were, however, flashes of brilliance in the prose. I especially liked the way Marie, the girl Mordecai rescued, spoke. It felt authentic and distinctive. Unfortunately, she was underused in the story, far too often the victim rather than an actor in her own right–though when she did act, it was decisive and important to the plot.

Mordecai Slate is a cold and pragmatic professional. He hunts vampires because he’s good at it and because it pays well. While he doesn’t like it when innocents get killed, he’s not an idealist, and isn’t in this business to save people. He’s a bounty hunter–a character archetype with a long history in Westerns–and not one with a heart of gold. He does, however, evolve over the course of the story, for reasons that make a lot of sense in the context.  His three best allies in this fight are Doc Washburn, a washed up physician; Reverend Powell, a priest who’s nearly lost his faith; and Taos, a gunslinger and Marie’s ex-lover. Taos is something of a wildcard, as his primary motivation is to protect Marie and that sometimes conflicts with Mordecai’s mission. Mordecai and Taos are often fighting and it’s clear that there will be a showdown by the end.  The last significant character is Devereaux, who owns most of the town and will do anything to save it, even if that requires certain sacrifices. This volatile mix of competing purposes clearly won’t lead to a happy ending for everyone.

Opposed to them is the vampire Dax Manion; his gang; and his human servant, Del Cobre. Cobre is probably the most interesting of the villains, a human intensely loyal to a vampire who otherwise hates all humans. The relationship between them would be touching, if it weren’t dedicated to turning the Southwest into a wasteland ruled by the undead.

There were a number of places where the story was decidedly un-PC. Now I think that too much political correctness can drain the life out of stories, especially ones which take place in historical settings where political correctness is an anachronism (and a form of cultural imperialism), so it’s not something I’ll dwell on, but if it’s something that may bother you, consider yourself warned.

One thing I will say for the novel is that it ends well. It’s not a happy ending, as it takes a dark turn, but it’s an appropriate one for the story and it gives some depth to Mordecai’s and Marie’s character arcs. It’s not perfect, as one subplot concerning Dax deriving power from the Wolf Moon got cut off before it could really solidify. But as the whole Wolf Moon subplot never did much for me, I wasn’t too upset to see it go. I think the subplot’s main purpose was to draw everyone together for the big battle scene in the end, which it accomplished well.

Vampire Siege of Rio Muerto is available from Amazon for $3.99.

If you have a book you’d like me to review, please follow the submission guidelines here. I won’t be putting up a review next month, as I’ll be doing a lot of traveling in December and spending time with family, and they tend to get annoyed when I ignore them in favor of typing on my computer or reading. But I intend to post something in February.

Well, choppy sentences or not, un-PC or not (I disagree with that BTW) the book is now available in paperback.