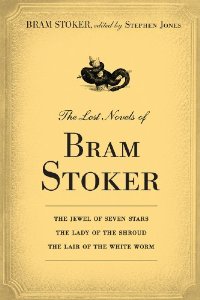 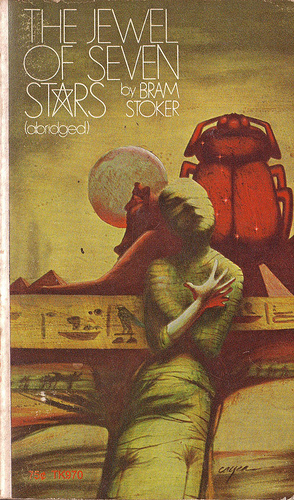 This opinion appeared to have been universal, for Stoker’s publisher later deleted a lengthy chapter with background information (which was published separately as a short story) and had the author rewrite the ending. Regrettably, this only made matters worse, for the revised final chapter is an unconvincing happy ending that convinces no one. Stoker seemed to be building toward a sense of doom with the Divine Hand of Justice smiting the participants in this sacrilegious rite with the same sense of inevitability as befell Lot’s wife and the wayward citizens of Sodom in the Old Testament. Yet somehow, he seemed unable to carry it off convincingly. Rather strange coming from the author who created the defining vampire story, with its juxtaposition of Old World religion and superstition outstripping the Modern World’s rationalism and science. 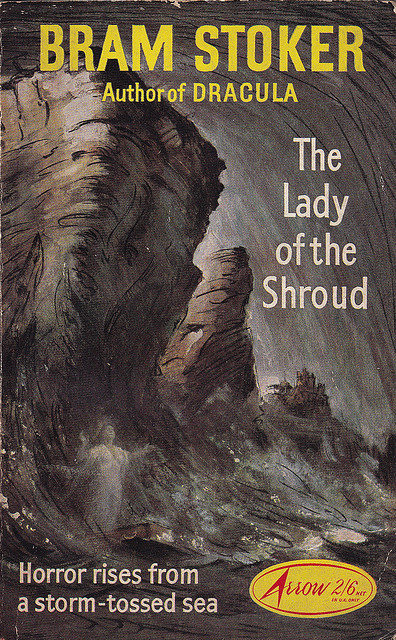 Skyhorse Publishing must be lauded for including the original unabridged text of the novel, as well as the more common rewritten final chapter, along with excellent notes from editor, Stephen Jones. Likewise, Skyhorse delivers the unabridged edition of the second novel, The Lady of the Shroud (1909), which is often missing the last quarter of this lumbering 400 page behemoth in most reprint editions. For once, I found myself dissatisfied with Stephen Jones’s notes, which consider the book an early science fiction novel, perhaps the one genre this taxing work doesn’t touch upon.

The Lady of the Shroud is an epistolary novel, like Dracula, which automatically makes it seem less modern than The Jewel of the Seven Stars. The book starts out recalling Dracula with its seductive, icy cold vampire-like Balkan noblewoman seducing the sedate Englishman. The unnamed country appears to be Transylvania, with its long history of holding off the Turkish Empire and remaining free of Islam.

Soon the suggestion of horror gives way to the most implausible gothic romance, as our hero weds the beautiful noblewoman without even knowing her name or speaking her language. Such was the idealized version of love in Edwardian times apparently. From there, the book wanders into an odd alternate history with its King and Queen of America and its detailing of a war that never happened.

Everyone who encounters the title character is in awe of her beauty and her regal perfection, but Stoker never gives the reader reason to empathize. The result is an overlong novel that keeps switching genres and never does justice to any. The author’s background as a civil servant is highly evident with the endless details of legal paperwork and constitutional red tape which could only interest one who has dealt with such matters for a vocation.

The most successful moments are the brief scenes of comic relief with the hero’s self-centered snobbish relatives. These are the only well-drawn characters in the book. One wonders what Stoker would have made of his own descendants, who have suggested he died a syphilitic madman or was a talentless hack, respectively. 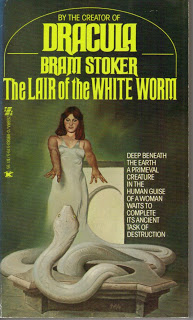 Now we come to the final novel, The Lair of the White Worm (1911). Inexplicably, Skyhorse opted to publish the abridged edition and not the rare original text. Over 100 pages are missing and while it surely hurts the book, it must be said this poorly written mess would not be redeemed had it been published intact.

Much of the book reads like a summary rather than an actual narrative. A novel concerning a seductress who is actually a wereworm, a student of Mesmer engaged in a psychic battle with two equally gifted sisters, and a sedate English village setting should be absolutely enthralling, but instead the book is most notable for its near-unrelenting racism. Much British fiction of Victorian and Edwardian times is condemned for its imperialist attitudes of condescension toward the colonies. The Lair of the White Worm’s racism is a byproduct of the early eugenics movement that sprung up from Darwinism and was used to justify racial cleansing and a belief that people of color were sub-human.

Surprisingly, Skyhorse opted not to print the more common abridged text that substitutes the word “native” for the original racist slur. Perhaps their reasoning was the text would still be highly offensive to anyone but a white supremacist even without the slur. Stephen Jones’s notes fail to mention this aspect, suggesting he was unaware that the abridged text used would restore the original offensive language. For all his failings, Stoker created an immortal work in Dracula that the petty jealousies of untalented relatives or his own unworthy follow-ups (such as The Lady in the Shroud and especially The Lair of the White Worm) can do nothing to diminish.