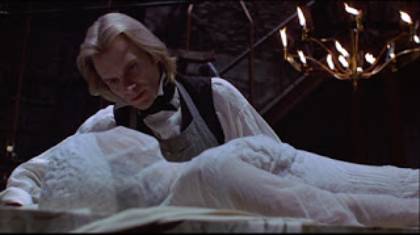 I have no explanation for why a fairly cheesy Bride of Frankenstein remake from 1985 popped into my head while listening to this, but it did.

There I was in my headphones, taking in what can only be described as seductively creepy orchestrations, when suddenly Sting appeared in my subconscious, leaning over his “monster” in the form of a dewy-eyed Jennifer Beals.

Perhaps I’d better back up and explain.

In celebration of the upcoming “season,” musician Ken Elkinson had sent over a copy of his new release, Halloween Ambient, and I was giving it a listen prior to approving it for play over the sound system in the Black Gate offices.

The last time I allowed my seasonal music to be played without previewing it first, Howard Andrew Jones and John O’Neill were moved to go shirtless, don fake fangs and red contact lenses, and hang around the interns’ canteen asking everyone’s blood type. After that incident, I promised the Black Gate lawyers there would be no further public playing of music which had the potential of inciting poor staff behavior.

Halloween Ambient was definitely not getting played.

A style of instrumental music with electronic textures and no persistent beat, used to create or enhance a mood or atmosphere.

By this description, Ken Elkinson is a master creator much like Frankenstein himself – which brings us full circle. 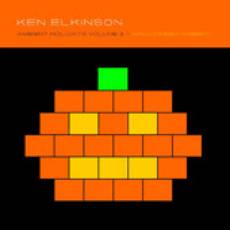 Cheesy as it was, there are a few moments in The Bride which are downright sexy largely due, of course, to the lead actors in question.  But it was these scenes which came to mind as I listened to the track Elkinson titled “Fear” – scenes that were creepy and disturbing, yet hot all the same.

Which pretty much describes the entire compilation of 12 tracks and which is why I’ve become oddly addicted to Elkinson’s music, but never listen to it at work.

It’s no wonder, really.  Ken Elkinson has been at this whole ambient music thing since his debut CD, Midnight Conversation, in 1997.  In the sixteen years since, he has released 26 more CDs, including odes to other holidays such as Christmas Ambient, Generations of Yuletide, and Ambient Holidays, which are all rather lovely and which I will certainly add to my “snowed in” collection.

Elkinson’s work is available at his web site, as well as iTunes and Amazon.  And though there are no tracks from the Halloween release, you can get a feel for his style on Elkinson’s YouTube channel.

Don’t be fooled by the cover art; Halloween Ambient is beautiful, gothic-inspired background music that will set the perfect tone for your (adult) party.

Undead guests and Sting not included.

If the music inspires you to do so, put on the fake fangs and the puffy shirt, then post a comment or drop a line to sue@blackgate.com.