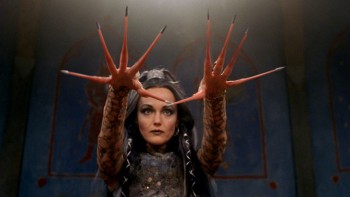 Bad films reek, and at a distance, too.

Bad Arthurian films have a special odor all their own. John Boorman’s Excalibur (1981)  may be a mess, but it’s a glorious mess, chaos of the highest and noblest order; in retrospect, it smells remarkably sweet.

Sadly, where Excalibur rises above both its Wagnerian grand guignol and its elaborate and intentional eccentricities, the mini-series Merlin (1998) sinks beneath a morass of imitative, careless, and flashy choices. It’s like a pretty stone chucked into dark and thankless waters: for an instant, on its way down, it glimmers. And then, blessedly, three hours later, it’s gone.

The star-studded cast is jaw-dropping. A film that boasts John Gielgud, Miranda Richardson, James Earl Jones (voice only), Isabella Rossellini, Rutger Hauer, Billie Whitelaw, and Helena Bonham Carter shouldn’t be a failure –– such an outcome shouldn’t be possible –– but as with so many popular music albums featuring a glittering luminati of “guest stars” and “collaborators,” star power proves to be yet another form of lead weight. Without the grace of good storytelling and with far too many overwrought effects, even the best actors on the planet prove to be nothing more than celluloid cannon fodder. 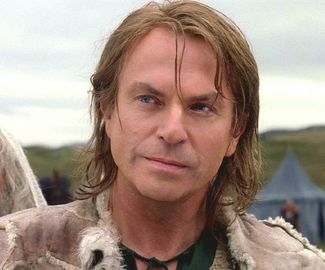 One might expect a film set in the Dark Ages to make at least a pretense at depicting its spoken language as something unlike what passes for day-to-day banter in our current, contemporary world.

No such luck. These characters sound, even when they’re making childish threats about the power of faerie, as if they’ve just stepped out of the local supermarket. Then again, most of the dialogue is so hackneyed, it would sound insipid no matter the dialect.

Good dialogue never says what’s expected. For example, “It’s the moment I’ve been dreading,” is the sort of sentiment many people have felt and known, but actually saying the words –– at best, it’s a stock phrase, over-used and thus over-worn. The trick for a nimble, able writer is to recast those words in new and surprising ways. Oblique ways, even. Smart writers save the obvious statements for comedy.

The soundtrack, equally hell-bent on saying the obvious, trots out all the standard overblown tropes of the cinema fantastique. Bells and chimes, massive swooning crescendos at key dramatic moments… oh, never mind. You know the drill. 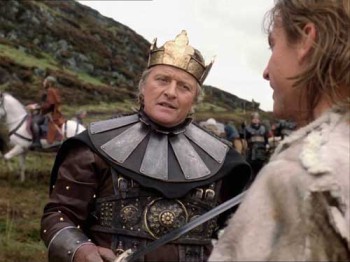 Even if one accepts the notion that Merlin-tales might require a certain unsteadiness of time, Merlin takes a kind of cheeky delight in tossing in all manner of sights and inventions that were literally ages away from Merlin’s (and by extension Arthur’s) day. Merlin’s crystal cave is awash in massive hardback books, most of which are so neatly bound that one can well imagine a Britannica salesman taking them door to door.

The costumes are, for the most part, absolutely preposterous. As for the armor and swords, well, most Historicals prefer Medieval arsenals, so it is perhaps unfair to single out Merlin. Even so, the film looks as if were set in and around Shakespeare’s day, not some one thousand years before. Did no one do any research before embarking on the production design?

Among the many unbelievable snippets of dialogue: “Watch me swash a buckle!”

Now, doth that not sound passing peculiar? It’s as if the Oxford English Dictionary had never been invented, and as for research, well. Granted, using English in the first place is absurd, given the time period depicted, but then, if we want to understand the action — if we want to participate at all in the act of filmic translation — then I suppose one must forgive one or two linguistic fallacies. 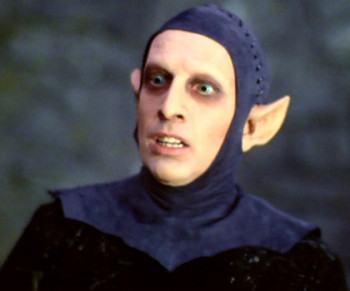 Martin Short, who serves as Merlin’s semi-demonic and decidedly annoying tutor, seems to have stepped in from an entirely different film. Short’s admitted comic ability is completely at sea here; the script abandons him, Robinson Crusoe-style, as a comedic island of one. The remainder of the film announces itself at every opportunity as Staggeringly Important.

“Why is it,” muses Hauer’s Vortigern, not far in, “that I surround myself with a bunch of incompetent fools?” The observation proves all the more prescient with every passing frame — except when Sam Neill is allowed to take center stage. The Australian actor seems almost young here, especially compared to Hauer, who looks decidedly long in the tooth given his action-figure reputation.

Neill is best known for his everyman turn in Jurassic Park, a venture which largely obscured his natural gravitas, and his penchant for sly rebukes aimed at any character who dares to oppose him — including the world’s many incompetent fools.

If Merlin the movie has a saving grace, it’s Sam Neill as Merlin. He is expected to carry the film, and he very nearly (against all odds) manages it.

Merlin as a character is portrayed as a Spockish hybrid: half-human, half-sidhe, and in thrall to neither or, depending, both. It’s not a bad gambit, and it’s one that’s served many a tale from lycanthropy to the Hulk, but here the problem seems diffuse, set constantly beneath the boot heel of the larger Arthurian legend, which of course must include grail-talk, the onslaught of Uther Pendragon, and tables set in a circular fashion. 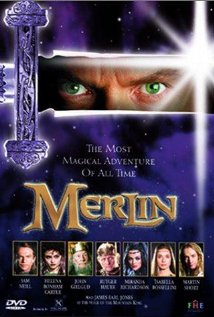 No matter what Merlin’s qualities are, he’s always up against the limping gait of Merlin itself. This is the sort of flick where even a fire-breathing dragon takes time off before devouring its prey (Rossellini) to show off by scorching a tree or two. It’s like monologuing, but this time from a mute lizard.

And yes, this is the sort of movie that doesn’t blink twice at putting yet another damsel (Rossellini again) in distress –– which would be fine, except said distress is entirely unnecessary and serves a plot point so minor it could have been abandoned entirely.

And of course this is the sort of entertainment where beauty is precisely skin deep, and dying soldiers utter clever remarks, employing their last mortal breath in the service of scriptwriters too superficial to “settle” for convincing human behavior.

Ah, well. There are pleasures here if one sticks with it: a few decent fights, some fine acting, a pretty tableau or three. The spectacle of yet another take on the Arthurian mythos is always diverting — to a point. Merlin would have been a great deal more diverting had the tales that birthed it been given the respect they deserve.