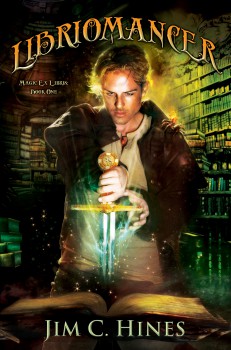 While the plot provides the momentum for the story, and the relationships between the characters (whether as potential lovers, enemies, or mentor and student) drive the conflict, it’s Isaac at the heart. Even in the middle of combat, he can’t help but wonder how things are put together or puzzle about how to duplicate the magical feats he witnesses. His quirky personality is so well drawn that, even though Isaac is well acquainted with the world readers are being introduced to, he makes a perfect guide. And the world, full of references to books that run the gamut from Twilight to The Adventures of Sherlock Holmes to The Odyssey, is one I am delighted to believe in.

*Notice: a review copy of this novel was provided by the publisher.

Alana Joli Abbott is a novelist, comic book writer, and contributor of role playing articles to Dungeons and Dragons Insider and short stories to anthologies including Haunted: 11 Tales of Ghostly Terror. Her
interactive novel Choice of Kung Fu is available from ChoiceofGames.com. She serves as a book reviewer for Publishers Weekly, School Library Journal, Flames Rising, and Kirkus Reviews. You can follow her latest adventures in writing and mythology chasing at www.virgilandbeatrice.com.

[…] Born, the sequel to Libriomancer, is narrated by fantasy book lover and magician Isaac Vaino, but in many ways the book belongs to […]

[…] interpretations on this theme in his Magic Ex Libris series. The first two books in the series, Libriomancer and Codex Born, have been previously reviewed by our very own Alana Joli Abbott, but here’s […]