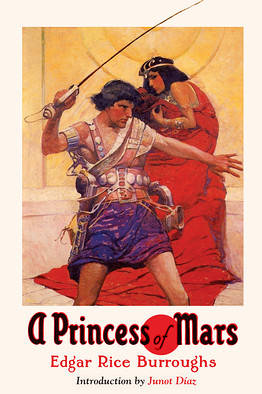 So yeah, I saw John Carter. And I liked it. Liked it enough that I went twice, actually. Been a while since I did that.

Still looks like it’s going to be the biggest box office bomb of the year, but these things happen. Doesn’t mean it’s not a good movie. And let’s face it — it’s helped introduce a whole new generation to the classic science fantasy of Edgar Rice Burroughs.

And not just all those young punks playing video games who don’t read books anymore.  I’m talking about a great many supposedly well-read science fiction and fantasy readers who never bothered to give ERB the time of day.

Sure, I’m fairly well read in SF and fantasy. And I have a (nearly) complete set of Edgar Rice Burroughs Mars books in paperback, picked up here and there at garage sales because I liked the covers. But Burroughs just never really appealed to me in my youth, and I never bothered to read them.

I loved the colorful action-adventure of the great pulp serials, but the mid-1930s was about as far back as I went.  Give me Asimov, van Vogt, Clifford D. Simak, Charles Tanner, H.P. Lovecraft. But if you appeared before they did — if your name was H.G. Wells, Jules Verne, or Edgar Rice Burroughs, for example — then you were just old.

Well, it’s never to late to correct past mistakes. Especially when The Library of America is making it easy with two beautiful keepsake volumes celebrating the centenary of Burroughs’ most famous creations: Tarzan of the Apes and John Carter of Mars. 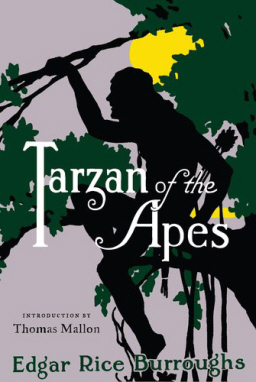 A Princess of Mars was originally serialized (as Under the Moons of Mars) in The All-Story magazine between February and July 1912. It was retitled A Princess of Mars for its first hardcover appearance in October 1917, published by A.C. McClurg & Company.

Tarzan of the Apes originally appeared in All-Story in October 1912; it was first published in hardcover in 1914.

These hardcover facsimile editions are compact and beautiful. Although these’s no details on additional volumes in the marketing literature LoA sent along, they refer to them as “Inaugurating an occasional series devoted to the major characters of American popular literature.”

So maybe that means there will be additional Burroughs volumes published. Cross your fingers.

In the meantime, you can certainly enjoy these. I know I am.

[…] Black Gate (John ONeill) on New Treasures: The Library of America’s A Princess of Mars and Tarzan of the Apes. […]

My personal favorite of this massive reprinting flood of a now “Public Domain” work now that a cruddy movie is in the theaters is the Fall River version.

Well at $12.98 from Barnes and Noble you get the first three books, Princess, Gods, Warlord and there are TONS of good Illustrations! New ones too and lots of them, not just mmmaybe one or two plates with a public domain illustration. Cheap but decent hardcover, part of their pile of “Classics” or whatever.

So, instead of if you are just going to download the text, perhaps format it yourself for your nook/tablet, and want to buy someone else’s use of this work, I suggest this. The reason for it is that they clearly love the work, they aren’t just excreting something to cash in. They put a lot of new work into this book out of love and respect for it.

I’m all for that. I plan to print Robert E. Howard’s “The Purple Heart of Erlik” in issue 3 or so of my magazine, clearly public domain now as legally published/printed before that Mickey Mouse threshold, but I’ll add to it with good illustrations and not use it to sacrifice “New” material. I’m even tempted to make New “Erlik Khan” stories though IMO he’s just REH’s “My Fu Manchu like character” and perhaps I’ll make up my own.

My only complaint, though this goes to ALL of these books, they are all printed in CHINA… I mean, is there any way any more to get a book printed in the USA!? I do want eventually to publish my writings, my magazine in physical print should it prove feasible, but I want it in AMERICA printed. I mean, really, there has to be some place you could place an order for books and I don’t mean vanity press but print several thousand copies that uses modern computers so you can submit files and charges a competitive rate.

There are certainly plenty of ways to get a book printed in the US. Every issue of Black Gate magazine was printed here — at A to Z printing in Skokie, IL.

Some publishers choose to print in China because it’s the only way to get costs low enough to make business sense. I suspect that why B&N did it, and why the book was so inexpensive. But since it can take 4-6 months to ship books back to the US, it doesn’t make sense for everyone.

Congratulations on getting your magazine close to completion. I’m sure you’ll have no trouble finding an American printer.