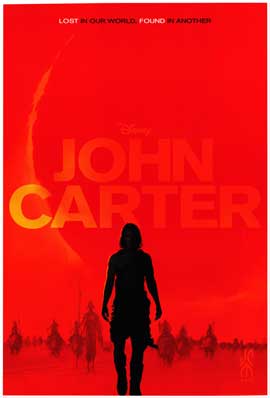 I’ve been enjoying Ryan Harvey’s enthusiastic review of the new Disney film John Carter, although I wasn’t able to make it to the local metroplex to see it myself this weekend. Apprently, I wasn’t the only one.

Entertainment Weekly, in assessing the weekend box office take, calls the film “one of the most high profile box office misfires in years.”

Carter really needed to open to $50 million at a bare minimum. Other films that reportedly cost around $250 million include Spider-Man 3, Harry Potter and the Half-Blood Prince, Pirates of the Caribbean: On Stranger Tides, and Avatar, and those four movies debuted to an average of $99 million. John Carter, on the other hand, collected an estimated $30.6 million this weekend… a dismal showing for such a costly project.

John Carter, which cost an estimated $350 million to make and market… took in about $30.6 million at the North American box office… That result is so poor that analysts estimate that Disney will be forced to take a quarterly write-down of $100 million to $165 million. The amount will depend on ticket sales overseas, where John Carter took in about $71 million over the weekend, a better total than Disney had feared…

Because of its enormous cost and the way ticket sales are split with theaters, analysts say the film needs to take in more than $600 million globally to break even. The only silver lining for Disney may be a dubious one: last March the studio’s Mars Needs Moms flopped so badly that it also required a write-down, making year-on-year performance comparisons less brutal.

Although the numbers look grim, $71 million overseas is nothing to sneeze at. With a combined weekend take over over $100 million, it may be too early to label John Carter a clear bomb. We’ll see what the future holds… and I still plan to see it this week.

i will be seeing it either during this week or the weekend.

The new John Carter of Mars is one of the best SciFi/Fantasy movies I have seen. It stays fairly true to the book … the slam on the actors performances is unfounded … highly recommended, the visual world is totally Burroughs … it is 2 hrs long and it goes by in a whirlwind .. loved it

Go see it twice for me. I’ll be at Lunacon, haggling over contracts. That’s a good problem to have, but it’s no trip to Mars.

I definitely plan on seeing it. I know it’s bad for Disney from a business standpoint, but for me it has a place waiting in my DVD collection and I haven’t seen it yet. It may be difficult to argue for a sequel, but hope springs eternal.

Black Gate » Blog Archive » New Treasures: The Library of America’s A Princess of Mars and Tarzan of the Apes

[…] looks like it’s going to be the biggest box office bomb of the year, but these things happen. Doesn’t mean it’s not a good movie. And let’s face it […]

I’m a few years late to this, but honestly John Carter was a sloppily directed movie with a director who understood neither the title character nor the source material while loading the movie down with cliches taken from just about everywhere but the source and sending the budget skyrocketing. It’s nothing engaging, and neither lead is a worthwhile character. It’s honestly no surprise it flopped.