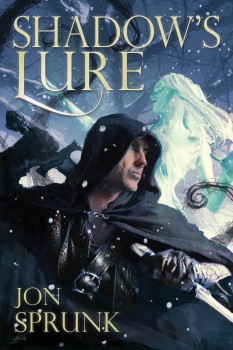 Sprunk has also done some interesting things with the character of his villains – he has given roles that could have easily degenerated into caricatures of villainy some interesting depth that livens up what would otherwise be a standard bit of “Look how EVIL we can be!” scenes.

The only problem with the book is that both the main story (Caim going north to find his family) and the secondary story (Josey dealing with some kind of monster assassin) both lack anything but the artificial urgency of immediate danger. Josey’s story especially feels tacked on, inessential in itself, and largely unrelated to the main narrative. But even Caim’s story has an almost accidental feel to it; the driving actions of the plot are mostly a consequence of Caim coincidentally being in the wrong (or right) place at the right (or wrong) time.

All that said, it does offer a lot of promise for a third book (Shadow’s Master, due in March 2012), setting up all of the elements for both a large, epic narrative about shadow monsters and world domination, and a gut-wrenching personal dilemma that is actually very rarely seen in modern sword and sorcery. The generally high quality of the writing, and the ambition apparent in the last steps of Shadow’s Lure, makes up for a bit of a meandering middle, and definitely makes the upcoming third leg of the story worth checking out.