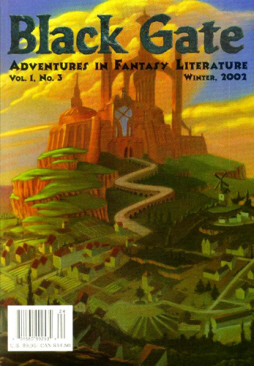 Keith West, mastermind behind the excellent Adventures Fantastic review site, took advantage of our Back Issue Sale to lay his hands on some of our rarer back issues — including the nearly-out-of-print Black Gate 3, a star-studded issue featuring Harry Connolly, Ellen Klages, Darrell Schweitzer, ElizaBeth Gilligan, Elaine Cunningham, Mike Resnick, Don Bassingthwaite, and the first published story by Todd McAulty. He covers the issue in detail in his review:

I decided to start this series with Black Gate 3, Winter 2002 because I like this publication.  It’s published some great fiction over the years by people who have gone on to have successful careers.  I can’t think of a single issue that hasn’t been a winner.  By the third issue, BG was beginning to hit its stride and had developed a clear editorial style… BG 3 clocks in at 224 pages, with approximately 150 pages of fiction and accompanying illustrations, the rest being devoted to reviews and articles, the ToC, an ad for subscriptions, and an editorial.

Keith calls out several stories for special attention, including the sequel to “The Whoremaster of Pald” (BG 2) by a new writer named Harry James Connolly:

Harry James Connolly, who has since gone on to publish several novels as Harry Connolly, returns from the second issue with another story set in the city of Pald.  “Another Man’s Burden” is a heartbreaking tale of what happens when we try to realize our dreams by any means possible.

Harry’s recent novels include Child of Fire, Game of Cages, and the just-released Circle of Enemies. Keith also had words of praise for another short story writer who has since gone on to considerable acclaim, including a Nebula Award, and the Scott O’Dell Award for Historical Fiction for her first novel, The Green Glass Sea:

In “A Taste of Summer,” Ellen Klages (Portable Childhoods

) tells the story of a young girl and a very special ice cream shop.  This one was highly reminiscent of Ray Bradbury’s Green Town stories, and it took me back to the summers of my childhood, despite the fact they weren’t much like the one in the story.  Of all the stories in the issue, this one moved me the most.

All in all, BG 3 is a solid issue, with a great deal of exciting fiction to recommend it.  There’s something here for everyone.  From sword and sorcery to near contemporary to futuristic, from quiet and thoughtful to humorous to horrifying. You can’t go wrong.  And although they may disagree with me, it’s fun to see some of the early efforts of some of the rising stars of the genres.

You can read the complete review here. Keith’s previous review, of the Warrior Women fiction of Black Gate 15, is here.