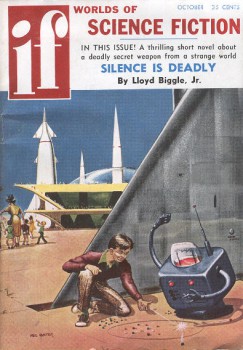 This is the fourth installment in Rich Horton’s retro-reviews of science fiction and fantasy digest magazines from the mid-20th Century. The first three were the February 1966 Analog, the December 1965 Galaxy, and the January 1966 issue of The Magazine of Fantasy & Science Fiction.

Back to the ’50s for this one. If is a magazine I remember with affection, even though I never saw a precisely new copy — the last issue, except for an abortive one issue 1986 revival, appeared in December 1974, just a couple of months after I started buying magazines, but my source (Alton Drugs in Naperville, IL) didn’t carry it. But its evident sense of playfulness, at least in the Pohl years, has always appealed to me.

At any rate, this issue appeared at a portentous time – its issue date is October 1957, the same month that Sputnik I was launched. So this magazine is from the very cusp of the Space Age.

Indeed, I have a few magazines on hand from roughly the same time (1957, or up to January 1958 – which certainly went to press before the news of Sputnik), and I propose to cover them in the next few old magazine reviews.

At any rate this issue appears fairly unambiguously to be If: Worlds of Science Fiction. The editor (and publisher, and indeed founder) was James L. Quinn. (Confusing because a later publisher was named Guinn.) (And I should note that though Quinn was publisher from the start, the first editor was Paul Fairman.) 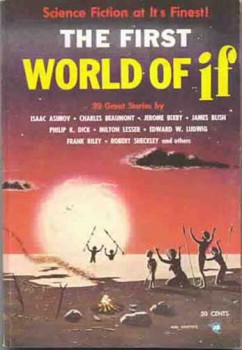 Assistant editor was Eve Wulff, and the art director was Mel Hunter, who contributed the cover to this issue (an amusing picture of a robot and a boy playing marbles in the shadow of a spaceship). Interior illustrations are by Virgil Finlay, Ed Emshwiller (credited as Ed Emsh), and Paul Orban, which is another way of saying that Mel Hunter had good taste (or good connections).

There aren’t many ads: the back cover (both sides) has ads for the SFBC (including an offer of a “Bonafide” reservation for one of the first commercial flights to the Moon — did anyone happen to get one of those?). The other ads were inhouse ads — for The First World of If anthology, and for some crossword magazines published by Quinn.

Features include a chatty “Editor’s Report”, signed by “ekw”, presumably Eve Wulff, which among other things noted an upcoming short novel from “the man with 13 by-lines”, as well as a wife who was “one of the few female electronics engineers extant in the United States”: Bob Silverberg. There’s a science Quiz, “What’s Your Science I. Q.”, and a series of “Science Briefs”.

I found this last quite interesting — it’s a set of longish paragraphs on recent science news, some that came to nothing (a five year plan for a manned rocket ship, the Griffon, that would cross half the continent in 20 minutes), but some that became real, such as a mention of the invention of “image converters” – precursors (though using somewhat different tech) to Charge Coupled Devices. And a letter column, called “Hue and Cry”. 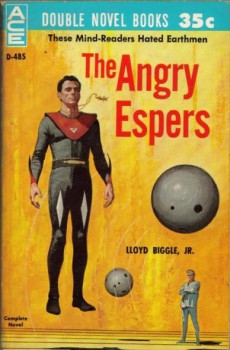 Lloyd Biggle is a fondly remembered author who never quite became a big name, never won a major award. And, somewhat to my shame, I have read almost nothing by him.

Very late in his life (and indeed several of the stories appeared after his death) he published a number of pieces in Analog, which ranged in quality from “OK but nothing special” down to “quite awful.”

Other than those, I had read only his Ace Double The Angry Espers, which in my review I called “not terrible, but nothing particularly memorable either”.

Oh, and I have another vanishingly slight connection with Biggle — he was a Professor at Eastern Michigan University at the same time that my mother was a student there. However, she doesn’t remember him, and probably never took a class from him. (He was in Music, and she was in Education.)

Obviously I haven’t read Biggle’s best work (which I take to be novels like Monument; The Still, Small Voice of Trumpets; and All the Colors of Darkness).

And I had also heard of his 1977 novel Silence is Deadly. I assume that this 1957 novella is the germ of the later novel, though the novel is according to the ISFDB a “Jan Darzek” story, while the novella’s protagonist is Bran Hilford. 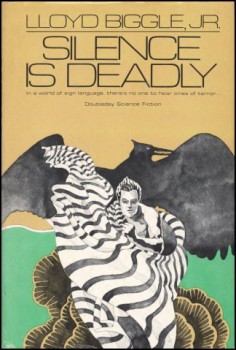 Did Biggle change the name 20 years later to fit the story into an ongoing series? Seems highly possible. (And, indeed, other readers have confirmed that this is the case.)

Anyway, in “Silence is Deadly” Bran Hilford is assigned by the Space Intelligence division of the Federation to investigate the disappearance of a series of agents sent to the planet Kamm. The Federation wishes to establish trade with Kamm, but they have been rebuffed. And they fear that their rivals, the Haarvian Empire, are involved.

This seems to be one of those universes where every intelligent species is basically human — certainly the Terrans, Haarvians, and Kammians are mostly identical. But to pass on Kamm Hilford needs some modifications — the Kammians have six fingers, and no ears. Yes, they are deaf. (Rather implausibly, Space Intelligence messes up and leaves Hilford with five toes on each foot …)

On coming to Kamm, Hilford is quickly sniffed out by the authorities, for a fairly clever reason, but he escapes with the help of the seamen, who are opposed to the attempt by the current “Keeper of the Bird” (chief Duke) to take over the world (partly by fixing the five-yearly Keeper selection process).

Much of this revolves around the huge predatory birds that once ruled this world, but now barely survive. There is also concern about a “secret weapon” that kills Terrans in a horrible manner. (I deduced the nature of this weapon quite easily, I should say.) Of course Hilford eventually confronts the Keeper of the Bird, and figures out what’s going on with the selection process. 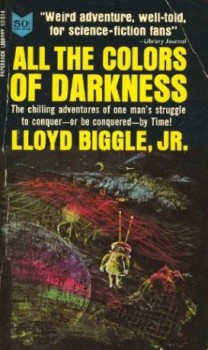 There are plenty of silly aspects to the story, but some clever ones as well. It’s not great work — and after all it was very early in Biggle’s career: his first story had been published only the previous year — but it’s enjoyable stuff.

The other novelette (note that at If even stories over 20,000 words were still novelettes — as I have noted elsewhere, Novella did not become a common term until much later, though Short Novel was not uncommon) was Bryce Walton’s “Dark Windows.” This concerns a future in which “eggheads” are blamed for all the world’s problems. People have periodic intelligence tests, and are subject to destructive brain-probes if they fail — or, I should say, pass!

Our hero, Fred, a loyal patriot, is recruited to the SPA to help hunt down eggheads, partly because he is held to have well-suppressed intelligence. Well, you can see where this is going — Fred will become an Egghead — but Walton does get to a slightly unexpected ending. He’s never been a favorite of mine — one of those obscure ’50s contributors to the lesser SF magazines who I always felt deserved his obscurity.

Rog Phillips’ “Game Preserve” is another story about humans of subnormal intelligence, though in this case the problem is mutations that have caused a great many people to be born essentially without intelligence. These people have been herded onto a large reserve, in hopes that over time they will die out. But the problem is that occasional intelligent children are born — these are considered particularly dangerous because they still carry the recessive gene for non-intelligence, so instead of being rescued and integrated into society they are hunted down by Federal game agents. 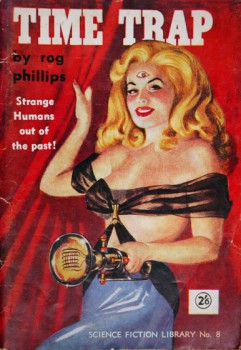 A rather horrifying premise. (Phillips doesn’t make this point, but worse, to me, is the notion that these children, raised without speech, would likely never have been able to learn to talk were they rescued after the age of three or so.)

The story follows one such intelligent child in the preserve, as he observes a group of hunters, recognizes that they are intelligent like him, and decides to try to meet them. The story moves unflinchingly to the conclusion it needed to reach. I have to say I was not convinced by the premise (nor by the genetics behind it), but I did find the story effectively horrifying as it was no doubt intended to be.

“RX” by Alan E. Nourse posits a galactic community in which Earth’s contribution is medical services. A team of a doctor and a surgeon respond to an emergency summons to a planet which has so far refused to sign a contract with Earth. The planet’s ruler is dying, and the witch-doctorish methods of the locals aren’t working. Their ethics require them to try to treat him, even though they risk death if they fail. The eventual solution is a bit trivial — somewhat on purpose — rather a minor bit of work, I thought.

The next two names were not familiar to me as SF writers. But the first, Harry Lorayne, rang a faint bell. Apparently he could have helped me remember him better — Harry Lorayne is a once quite well know memory specialist, born 1926 and apparently still alive. I don’t know if the author of “The Poors” is the same Harry Lorayne, but I suspect he might be. This was his only appearance in the SF magazines, according to the ISFDB.

It’s a very slight story in sub-Galaxy mode. Aliens visit Earth and are horrified to learn that the entire social structure and economy is based on game shows. Winners of game shows have enough money to live comfortable lives, but losers are relegated to the slums as “the Poors.” Inevitably, the alien ambassador is invited to play a game show, with predictable results.

George Revelle is even less known (assuming he’s not the notorious banker from Missouri who was convicted of murdering his wife but later exonerated). He published only two stories in the field, both in If: “Operation Boomerang” in April 1957, and “Puppet Government” in this issue. “Puppet Government” is another somewhat Galaxy-ish satire. Brandon is a puppet-maker, facing an increasing burden of paperwork in satisfying the federal government. And each year the government tries to hire him, offering him good jobs with exemption from paperwork and taxation. There’s a punchline, of course, and a rather implausible one (economically), but I know plausibility wasn’t the point.

By no means a great issue of this magazine, but not without interest.