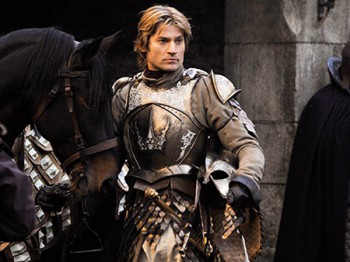 Every time I think I’ve moved on from the fantasy/realism debate, someone drops the gauntlet and I find myself back in the thick of the fray, giving and receiving hard blows in turn. The latest exchange stems from this preview of the upcoming HBO miniseries A Game of Thrones, courtesy of the LA Times:

Based on George R.R. Martin’s “A Song of Ice and Fire” novels, the 10-episode saga is a high-stakes move for HBO — an expensive leap into spectacular fantasy for a network whose reputation was built on nuanced, character-driven dramas geared toward adults.

So … ASOIAF is a risky move for HBO because it’s fantasy, and therefore cannot be possibly be nuanced, or character-driven, or geared toward adults. Good to know.

At first I thought the snark was just thin-skinned me not feeling the love, but the above quote is followed up with an even less subtle dig (emphasis mine), provided in the context of establishing the credentials of writers/producers David Benioff and Dan Weiss:

Having studied two of 20th century modernism’s towering geniuses and later published literary fiction themselves (Benioff wrote several novels, including “The 25th Hour” and “City of Thieves,” while Weiss penned “Lucky Wander Boy”), it might seem strange that they were drawn to Tolkien-esque fantasy.

Strange, indeed. Because we all know there’s nothing literary about The Lord of the Rings, obviously. Which begs the question: With such a considerable pedigree, how could Benioff and Weiss accept such a low-brow, geeky project?

But for all their education and high-end novels, Weiss and Benioff quickly point out that they’re not just literary geeks: They are also Dungeons & Dragons geeks.

Lest we forget, great swathes of mainstream media still haven’t accepted fantasy as a legitimate art form—except when it’s adapted by a pair of “rakishly groomed men” with “master’s degrees in Irish literature”, apparently. And buttressed with suitable distancing descriptors like “bloody power struggles, dark mystical forces, and children grappling with the sins of their forefathers.” When forced to use the dreaded “f” word, author Joy Press accompanies it with an appropriate dose of nose-pinching.

Let’s get this out of the way: ASOIAF is full-blooded fantasy. What else do you call a work that features dragons, giant wolves, undead “others”, includes tales of giants, and is set in a secondary world? Say it after me, LA Times—it’s fantasy. And it’s good. The two are not incompatible.

Unfortunately it’s not just the article’s author that gets in on the snark.

Benioff tries to keep his vision for the series — and Martin fans’ expectations — in perspective.

“There are certain things we are never going to be able to do the way Peter Jackson could with ‘Lord of the Rings,’” he says. “On the other hand, we have a lot more time to spend with our characters. And at this point in my life as a 40-year-old man, I am much more excited by George’s stories than I am by ‘Lord of the Rings.’”

“Because Frodo never gets to go to a brothel,” Weiss pipes up impishly, as Peter Dinklage’s fabulously saucy character, Tyrion, so often does.

“Game of Thrones” is much more raw and graphic than most fantasy of “The Lord of the Rings”-”Harry Potter” kind. It offers beheadings and bare breasts, as befits the show’s home on HBO.

I’m still a few years shy of 40 so I guess I haven’t quite reached the same level of maturity as Benioff. But I’m glad that in another three years or so I’ll be sufficiently “adult” to graduate from Tolkien. My mature palate can then appreciate grown-up stuff like bare breasts, brothels, and beheadings.

Here’s a quote that you won’t find in the article:

Yet it was Middle-earth that proved to have the greatest staying power. Fantasy had existed long before him, yes, but J.R.R. Tolkien took it and made it his own in a way that no writer before him had ever done, a way that no writer will ever do again. The quiet Oxford philologist wrote for his own pleasure, and for his children, but he created something that touched the hearts and minds of millions. He introduced us to hobbits and Nazgul, took us through the Misty Mountains and the mines of Moria, showed us the siege of Gondor and the Cracks of Doom, and none of us have ever been the same … especially the writers.

Tolkien changed fantasy; he elevated it and redefined it, to such an extent that it will never be the same again. Many different flavors of fantasy continue to be written and published, certainly, but one variety has come to dominate both bookstore shelves and bestseller lists. It is sometimes called epic fantasy, sometimes high fantasy, but it ought to be called Tolkienesque fantasy.

The above is from Karen Haber’s Meditations on Middle-earth. The author is George R.R. Martin. He gets it, and understands the great heights to which fantasy can aspire, even if “literary” authors like Weiss and Benioff do not.

Lest I be accused of being too down on the forthcoming HBO series, let me say this: I’ve read and greatly enjoyed all four books of ASOIAF (though I was less impressed with A Feast for Crows). The previews I’ve seen of A Game of Thrones look pretty great. Sean Bean is a wonderful actor—I thought he did Tolkien one better with his portrayal of Boromir—and I’m sure he’ll make an amazing Ned Stark. I can’t wait to see how HBO tackles the ice wall, or the Bronn/Vardis Egen duel, or the battle at the Whispering Wood. Should HBO opt to pick up A Clash of Kings, none would smile broader than I at the prospect of seeing Tyrion turn to Ser Balon Swann and utter:

“Those are brave men,” he told Ser Balon in admiration. “Let’s go kill them.”

But I nevertheless find my enthusiasm tempered when hype resorts to Tolkien snark and anti-fantasy bias. A Song of Ice and Fire may share a lot in common with The Sopranos, but it’s still fantasy, damn it. It would be nice to see outlets like the L.A. Times (and the miniseries’ writers) cease the back-handed complements, give the genre its due, and remember the debt that Martin certainly hasn’t forgotten:

Most contemporary fantasists happily admit their debt to the master (among that number I definitely include myself), but even those who disparage Tolkien most loudly cannot escape his influence. The road goes ever on and on, he said, and none of us will ever know what wondrous places lie ahead, beyond that next hill. But not matter how long and far we travel, we should never forget that the journey began at Bag End, and we are all still walking in Bilbo’s footsteps.

That was most excellently said, Brian.

I would say ASOIAF is risky for HBO because it’s much longer than any other fantasy series ever adapted. The logistics of scheduling among such a large cast, should there be a second series, seems epic in its own right. Also, the books are as yet unfinished

I feel and agree with your sentiments towards the LA Times and Benioff and Weiss. The LA Times writer is just being a literary snob in a field of literary snobs. And Benioff and Weiss are probably trying to make the series more palatable for readers/ potential viewers who only see fantasy in terms of Tolkien and Harry Potter (and wouldn’t be caught dead reading/ watching either). It’s frustrating and infuriating, but they’re trying to build an audience that includes those who don’t read fantasy.
As an aside, I do like your move to rename epic fantasy Tolkienesque fantasy!

If there is one thing I hate, it is hearing snobs try to make genre into a synonym for crap. When these folks stumble across really well written genre works, they try to redefine them as “not genre.” And it doesn’t matter how thoroughly steeped in fantasy or science fiction a work is, they STILL do it. I once heard someone deny Ursula LeGuin wrote fantasy because her work was “so poetic.” Sheesh!

If there is one thing I hate, it is hearing snobs try to make genre into a synonym for crap. When these folks stumble across really well written genre works, they try to redefine them as “not genre.”

It’s funny how that works: Apparently fantasy by default can’t be literary, or for adults. And if it exhibits any of these characteristics, then it’s not really fantasy. It’s character-driven, quasi-historic, medieval-inspired fiction.

As far as I’m concerned, genre fiction makes use of broad, superficial trappings (i.e., fantasy employs swords and armor to tell a story, science fiction rocketships and rayguns, etc.) to tell a story, but otherwise uses standard literary techniques, and is certainly capable of accomplishing everything literary fiction can, whether that’s character development, or plumbing the human condition, or ruminating on the nature of the universe and mankind’s place therein.

There’s certainly a lot of formulaic, sub-par fantasy and sci-fi, but you can say the same for mainstream, “literary” fiction as well.

I didn’t realize that people still read the LA Times…