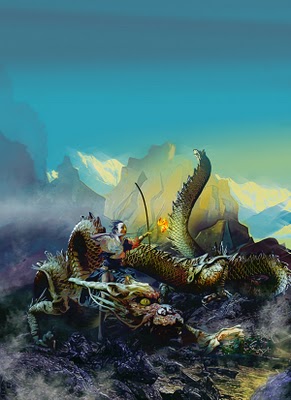 Malcolm McClinton, who painted the cover for Black Gate 13 and has been doing interior art for us since Black Gate 10, has sold another cover to Dungeons & Dragons magazine Kobold Quarterly.

The cover, Golden Dragon, pictured at right, will be on the fall issue. Concerning the piece, Malcolm says:

Most of the time I find that Asian dragons seem too cartoonish and almost comical in their deception and I was really excited to try and bring one to life in a way that captured them in a more living realistic way. Any one that knows my  intrepid boarder collie Lilly, might instantly recognize her influence on the piece.

You can read more details and see more samples of Malcolm’s terrific art at his blog, Hanged Man Studios.

Kobold Quarterly is celebrating their 5th Anniversary this year.  The magazine, edited by Wolfgang Baur, was created to focus on open design, and now fills the niche once occupied by Dragon and Dungeon magazines, both now sadly defunct.

The latest issue, Winter 2011 , is the 16th, and is the launch issue for the new Midgard campaign setting. It features official Paizo magic items for Golarion, the Pathfinder world and setting for Howard Andrew Jones’ novel Plague of Shadows, Harem Assassins feats and spells for Pathfinder, Potion Miscibility rules for 4th Edition D&D, the Ecology of the Gearforged for the Midgard campaign, an interview with gaming legend Robin Laws, Monte Cook’s column, the return of popular Dungeon Magazine author Willie Walsh with a humorous mini-adventure, plus a sneak peek of the Northlands sourcebook with a beer run among the Thursir Giants — two complete Pathfinder mini-adventures. The issue is 76 pages with a cover price of $5.99, and you can order it in PDF format here.

Malcolm’s last cover for Kobold Quarterly was Issue 13, in Spring 2010. Their website is here.

I look forward to seeing this cover on KQ. I bet he meant “depiction” rather than “deception,” though.

This is certainly a beautiful cover.