By Joseph A. McCullough 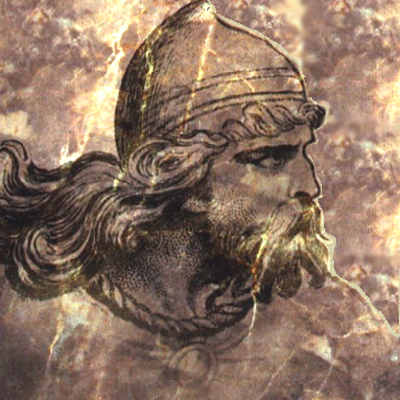 Despite the great debt owed to Robert E. Howard and the writers who followed him, the sword-and-sorcery tale was not quite born in the pages of Weird Tales; in fact it predates the concept of literature. Long before the printing press made popular literature a possibility, people told and occasionally wrote down stories to entertain, teach moral lessons, or as a means of recording the past. That many of these ancient tales can be classified as heroic fantasy is obvious, especially when one considers such well-known epics as the Odyssey and the Iliad. In the past few years I have come to realize that some of these ancient heroic tales can be placed inside the much more restrictive classification of sword-and-sorcery and are the direct precursors of the stories of Howard, Fritz Leiber, and other writers who helped to create the sub-genre.

Although few of these ancient sword-and-sorcery tales are written in an approachable style, they often contain elements that make them of interest to fans of the genre. That being the case, I have asked the permission of the editors of Black Gate to write a series of articles discussing some of the great examples of the sword-and-sorcery of history. 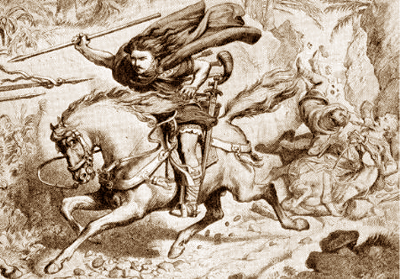 The Flashing Sword of Hereward the Wake

To most people, Hereward the Wake is a footnote in English History, the leader of the last organized English resistance against the Norman invasion of William the Conqueror. But in Anglia (a corner of England that still bears the name of an ancient Anglo-Saxon kingdom) people still tell tales of the heroic Hereward and his many adventures before, during, and after the Norman invasion. Most of these tales are based on De Gestis Herwardi Saxonis (The exploits of Hereward the Saxon) a short, 12th century manuscript that was compiled by monks within living memory of Hereward. Although many historians have dismissed much of the manuscript as being the fanciful invention of bored monastic brethren, it is a pure heroic tale of one of the last great Saxon warriors. It is also sword-and-sorcery.

De Gestis Herwardi Saxonis is divided into 36 short chapters, the whole being no longer than a novella. The story opens with a brief description of the hero, a short, broad young man possessing massive strength and martial abilities. He is also wild and reckless, so wild that at the request of his own father, Hereward is outlawed by the King. In one quick stroke, right at the beginning of the tale, Hereward has gained two of the most important traits of the S&S hero. His outlawry places him officially outside the confines of society, and his betrayal by his father removes any familial duties or obligations. Hereward immediately becomes completely free to chart his own destiny.

Leaving his home in Anglia, Hereward ventures down to the Cornish peninsula where he has two adventures that could have come straight from the pages of Weird Tales. First, Hereward fights and defeats a monstrous bear with human intelligence and speech. Later, he encounters a giant man called Ulcus Ferreus (Iron Sore) who possesses a “magic” sword. Hereward defeats him as well, but only after Iron Sore is tricked into giving up the sword.

Although not necessarily definitive, one of the common traits of sword-and-sorcery, as opposed to other forms of heroic fantasy, is that it often seems one step closer to reality. In this case, the evil creatures faced by the hero are slight perversions of creatures found in nature. Thus Hereward fights a mutant bear just as Conan fought several creatures that appeared to be mutant gorillas. Also, though the story contains a “magic” sword, this sword has no specific powers. It cannot shoot lightning bolts or turn blue in the presence of the enemy. In this sense, a magic weapon is just a really good weapon.

The next few chapters have Hereward wandering all over Europe as a mercenary sell-sword, certainly the most common profession of the S&S hero. Although this group of adventures has no fantasy component (except the acquisition of a “magic” suit of armor) they are full of swashbuckling adventure and often have Hereward adopting various disguises to sneak into enemy camps.

At the height of these adventures, Hereward gets married. At first glance, this seems to undermine the whole concept of the S&S hero. Certainly marriage, and the love implied, denotes a strong obligation on the hero’s part and takes away the freedom that is necessary for the genre? Not necessarily. Love is not an uncommon element in S&S. Conan loves Belit. Fafhrd & the Grey Mouser are both in love when they meet in Lankhmar. In neither of these cases does this love lead to obligation, or at least not for any length of time. Instead, the love serves a dual purpose of providing later motivation (revenge) and to give a dark edge to the stories. In Hereward’s case, his marriage will prove mostly irrelevant to the story as it provides him with neither obligation nor motivation. 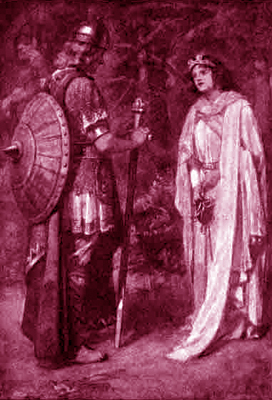 His motivation comes about soon thereafter when he returns to England and finds that the invading Normans have murdered his brother and occupied his family home. Hereward immediately extracts a bloody revenge against the Normans present, but it is not enough, and he takes the first steps toward launching a major rebellion against William’s invaders. Importantly, Hereward is motivated by his own, personal, desire for revenge and not by any sense of duty to the English. (If sense of duty had been his motivation, he would certainly have returned earlier, during the invasion).

Thus, even though the King that outlawed him has died, and all of England is under the power of a foreign occupier, Hereward remains an outlaw. For several chapters, Hereward’s story takes on the feel of the tale of Robin Hood, with many raids against the evil Normans. In fact, it is commonly thought that the later Robin Hood myths drew heavily on the stories of Hereward.

As Hereward’s success grew, so did his band of followers. Soon he is leading a small army that includes some of last remaining Anglo-Saxon nobles. With this army, Hereward establishes a base on the Isle of Ely, deep in the fenlands (swamps) of Anglia. It is here that Hereward and William have their dramatic confrontation, fit for the climax of any S&S novel.

The siege of Ely was the most notable event in England in the year 1071 and all of the chronicles, even the Anglo-Saxon chronicle, make mention of it. However, the fullest account of the battle is told in De Gestis Herwardi Saxonis. Worried that Hereward’s activities might foment rebellion throughout the country, King William decides to quickly assault the island fortress. To do so, he constructs a pontoon bridge across the swamp, but when his army begins to march across, it collapses under the weight and many warriors drown. Greatly disheartened by this set back, William is convinced by his advisers to turn to dark magic to try and end the siege.

If this sounds a little outlandish for history, it must be remembered that nearly everyone at this time believed in magic, and nearly everyone believed it was evil. This is an idea that has been passed straight into S&S. Although the genre is called sword and sorcery, it could just as easily be called sword versus sorcery. In nearly every story, the heroes use their wit and their strength of arms as their primary weapons; while a majority of the bad guys use magic. Magic is presented as an unnatural and inherently evil force that can only just (and not always) be controlled by the wielder.

King William sets to work building a stronger bridge to cross the swamp, and at the same time he hires a witch to curse the island. He places the witch on a high wooden tower and sets her loose just as his army is marching against the island. The witch shouts curses down upon Hereward and his men and part of her strange ritual seems to include mooning the Anglo-Saxons. In desperate straits, Hereward has his men set fire to the fens. As the army marches toward the island, a great wind picks up and blows the flames and smoke across the bridge, incinerating large sections of the army. Soon the flames reach the witch’s tower. Though the story doesn’t say specifically, there is a sense that the witch’s own magic has turned against her. The tower crumbles away, and the witch plummets to her flaming doom still shouting her evil curses. 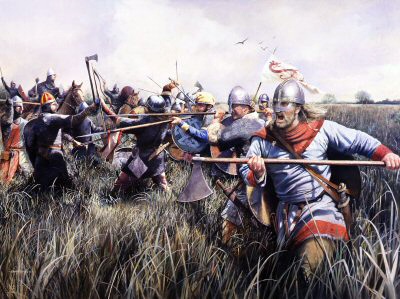 This battle was William’s greatest defeat on English soil. It was also the pinnacle of Hereward’s adventures. Soon afterward, Hereward is betrayed by the monks who live on Ely. They show William a secret way to the island, and the rebellion is crushed. Although Hereward manages to escape and renew his life as an outlaw, he knows the fight is over.

The last few chapters of the story make a shocking contrast to what has gone before. Slowly, Hereward is stripped of everything, including all of the freedoms that have allowed him to adventure as a sword-and-sorcery hero. At one point, Hereward becomes so lost (literally and metaphorically) that God sends a messenger to guide him home. Hereward becomes reconciled to King William, becoming his vassal, renounces his first wife to marry a second, and takes up the noble duties that his father had held before him. Once the outlawed champion of freewill, Hereward quickly becomes weighted down by obligations — to his King, to his wife, to his vassals, and even to God.

This is how De Gestis Herwardi Saxonis ends, but popular legend adds one more scene. Years later, his adventures now long behind him, Hereward sits before the fire in his family home. He is suddenly set upon by a group of Norman soldiers, the sons of men he killed. Caught unarmed, Hereward fights valiantly using whatever weapons come to hand. In the true spirit of the S&S hero, Hereward realizes death is upon him and decides to sell his life for as dear a price as possible. The dead lay thick about his feet when he his finally brought down and killed.

No one knows for sure how Hereward died. The churchman who wrote De Gestis Herwardi Saxonis would like people to believe it was in comfortable retirement. There are others, however, who would like to believe that at the end, for one final moment, Hereward was once again the great sword-and-sorcery hero of his youth.

The text of De Gestis Herwardi Saxonis was found inside the book Hereward of the Fens, written and translated by Trevor Bevis.