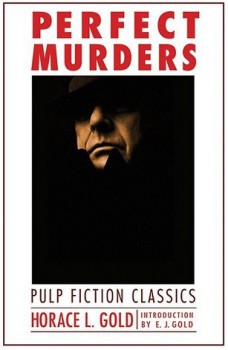 Raymond Chandler once noted how bad directors filmed whole sequences of mundane actions that could be more simply communicated in a single shot. A man need not be shown climbing into a cab and going to the post office to receive a letter, for example – all the audience needed was an anonymous postman handing the man the letter. This kind of boring direction, Chandler believed, was a holdover from the time when film was new and watching everyday occurrences on celluloid was still thrilling.

And so it is with Horace Gold. He was, in turn, a World War II veteran, the highest paid comic-book writer in the world, and the editor of Galaxy Science Fiction for over a decade. He was also an accomplished pulp fictioneer. Perfect Murders: Pulp Fiction Classics collects six of Gold’s science-fiction detective mash-ups; a seventh, “I Know Suicide,” is a straight noir mystery. Unfortunately, most of these stories are artifacts of their time, thin plots so laden with long passages of dialogue and commonplace action that the eyes glaze and the mind drowses. END_OF_DOCUMENT_TOKEN_TO_BE_REPLACED